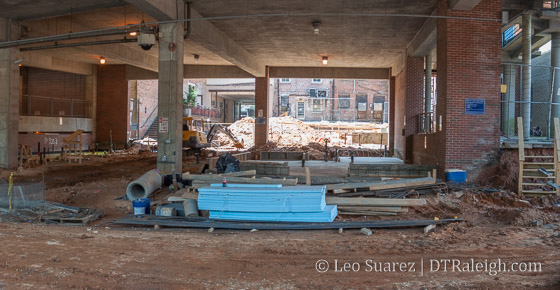 Here’s a photo (click for larger) through the construction fencing at the GoRaleigh Transit Station. You can see the foundation (if that’s the correct term) for the bathrooms on the left and the start of the crew kiosk in the center. The kiosk will have the ticketing/information window, the office for the crew and security.

You can see more details on the city’s project page. They have a link to a webcam that’s set up across Hargett Street also.

If you were a fan of the large brick “facade” on Hargett, it was recently removed and really opens up the space in a big way now. 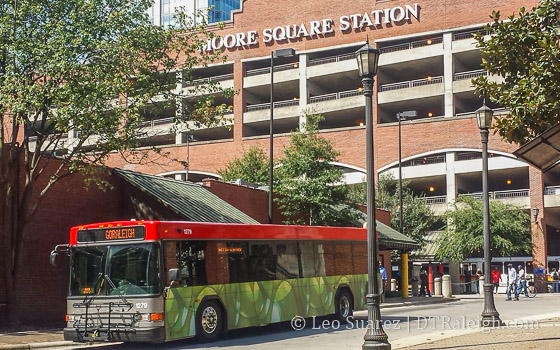 From my inbox to yours.

The new GoRaleigh station will be reflective of the new GoRaleigh brand. The goal is to enhance the future of transit in Raleigh and the Triangle by building a positive impression, not only with daily riders and commuters, but with the many visitors who frequent the city.

There was a lot of transit talk at this week’s city council meeting. Presented to council were some 3D renderings of what the future Moore Square Bus Station could look like after its upcoming upgrade. Technology upgrades in downtown transit are also coming as money has shown up towards setting up a downtown Raleigh smartphone application and a smart card fare system for the CAT buses.

As part of the ongoing Downtown Bus Facilities Master Plan, Moore Square Transit Station is getting an upgrade. Jason Horne of the Raleigh Transit Authority and
the design team presented some new renderings of the station’s future. Construction could start as early as Spring 2015 on the now 26-year-old facility. Plans call for a new bathroom, security and ticketing office, more open, friendlier spaces, and and an additional lane for buses to handle more capacity.

Construction is estimated to take 14-18 months with the station being open throughout that time period. Here are a few slides from the presentation. Make sure to read the Raleigh Public Record’s article about the presentation and to see the rest of the slides and renderings. 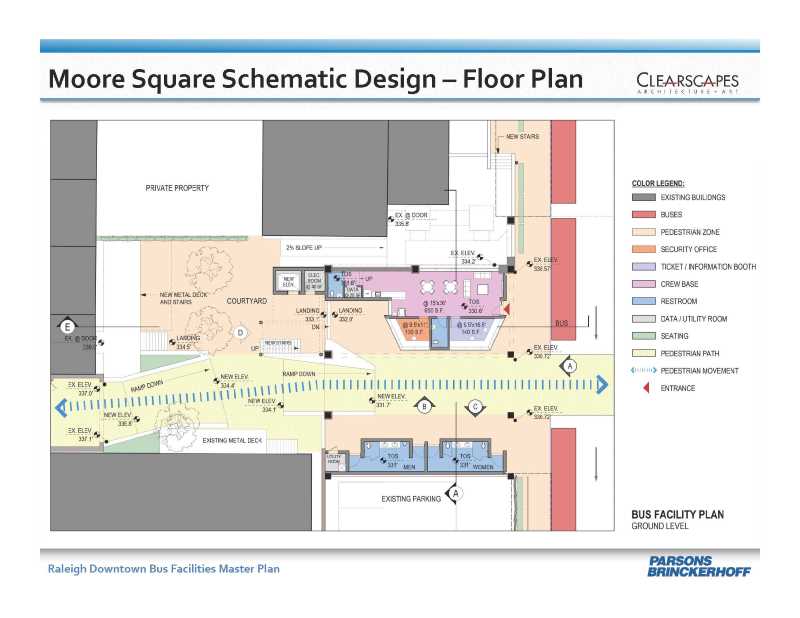 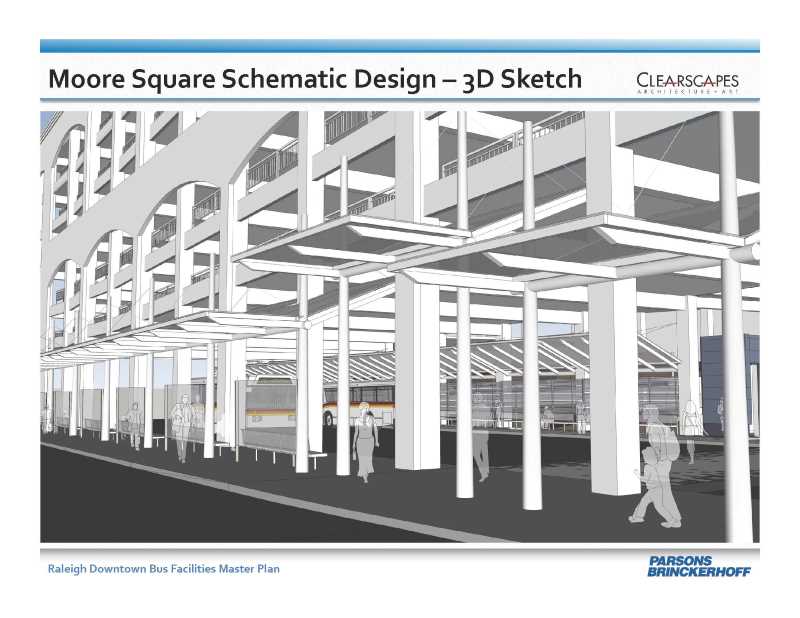 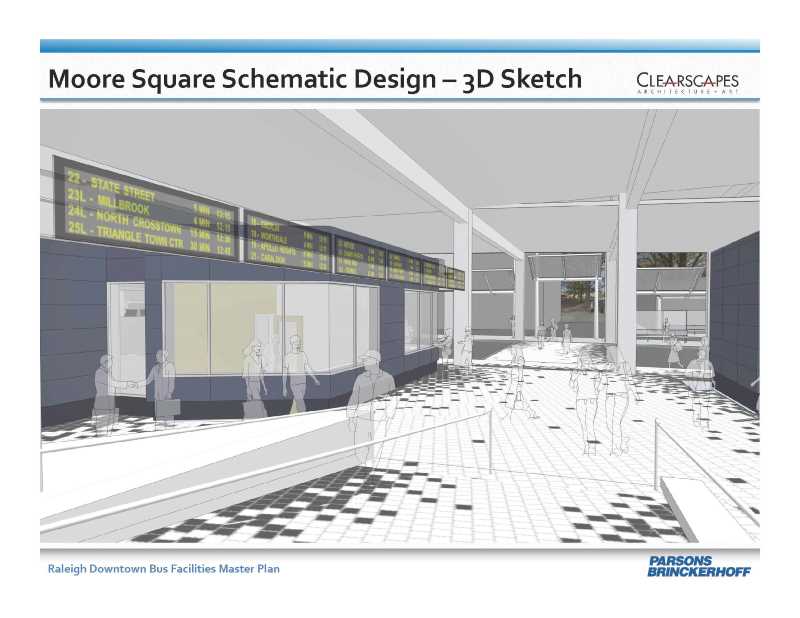 We definitely talk about parking a lot here. However, an initiative that I’m involved with to bring a smartphone app to downtown in order to help with any parking struggles has moved one step further. During the meeting, council approved $5,000 from a contingency fund to go towards the development of that app. The Downtown Raleigh Alliance will raise the rest of the money and see the app to completion.

Read more about our efforts here:

*Parking In Downtown Raleigh May Get Easier Thanks To Open Data

Smart Cards for CAT Buses
As a final blurb that I think is worth mentioning, the city has received grant money from NCDOT to go towards a smart card fare system for CAT buses. Mentioned at the meeting, here’s an excerpt from the press release:

The Raleigh Transit Authority has adopted a priority of offering smartcard technology on CAT buses. The grant will allow a contactless, smartcard payment option to be installed on the fare boxes of the CAT bus fleet. Bus purchases will have fare boxes that will accommodate contactless smartcard and mobile ticketing applications. The total funding for the project is $378,440 90, which is 90 percent NCDOT grant funds and 10 percent City of Raleigh funds. 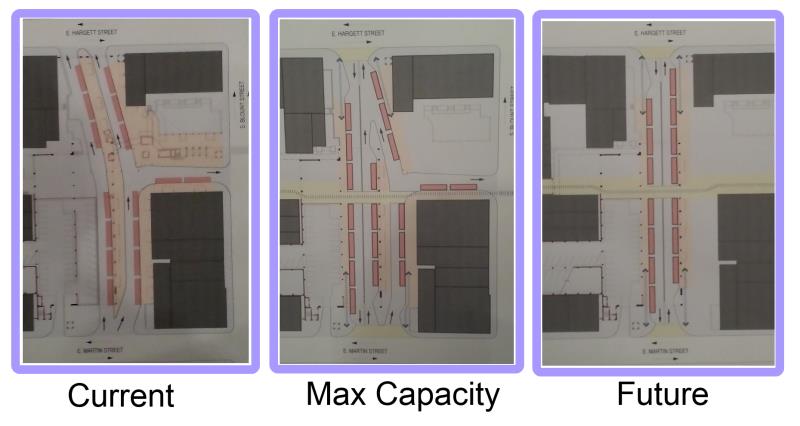 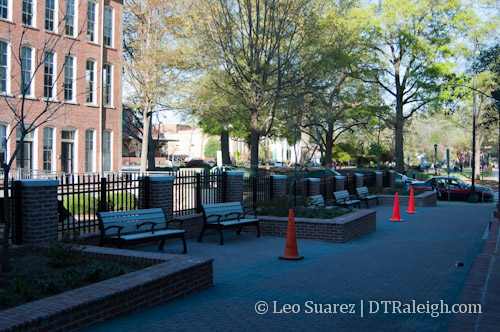 Recently, construction has finished on some new walkways and seating areas at the Moore Square bus station. The fountains that used to go along the sidewalks of Blount Street have been bricked over and now have a few more benches. More amenities are always welcome at the busiest transit stop in Raleigh. As a frequent bus rider, I see the station being pretty busy at the rush hour times during the week.

In the future, the station will become a major compliment to Union Station so look out for more improvements. 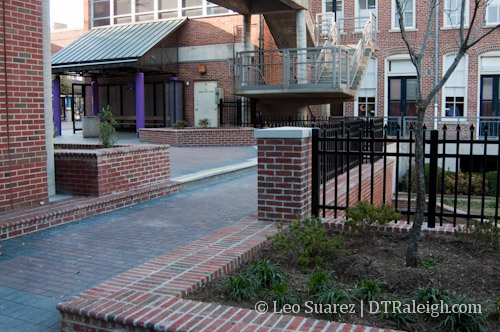 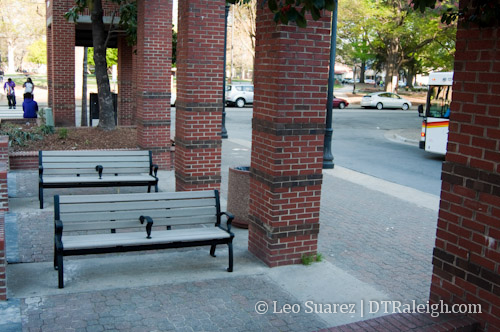