This month, the Raleigh City Council has moved forward with adding much nicer bus shelters to our existing system. This was a result of a design competition that was held a few years ago. The design has changed since the competition but the result is still a stark difference from our current design.

You may have already seen the concept shelters as some are installed outside of the NC Museum of Art. Now, we’ll be seeing more around the city.

The video above from the March 3 council meeting has the history and latest discussion on this topic.

From the beginning, finding a way to elevate the GoRaleigh brand was important. Bus shelters can be seen as the “front door” to transit so the difference between the current shelter and this new one helps show a greater commitment to transit by our city.

Last year, the council lowered the requirement (based on daily riders) for a bus stop to get a shelter installed. That change made about 200 stops now eligible for a bus shelter. The city hopes to have this built out by 2023. That would mean that 85% of riders would have access to a shelter.

I think they look great and the branding behind them is worth the extra cost.

There’s a survey out for anyone interested in expanded bus service and bus rapid transit in Wake that readers should probably take a look at. Jump to the survey here.

If you aren’t familiar, plans for expanded transit service will be rolling out between now and 2027. Downtown Raleigh is a central hub of the frequent network with the BRT lines coming in and out of downtown Raleigh. The survey focuses on the bus component only and I’m expecting the commuter rail portion, dropping passengers off at Raleigh Union Station, to come later. 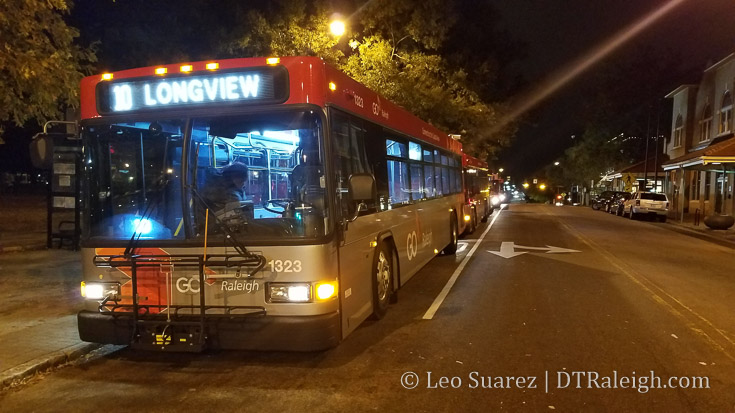 I’m posting this here purely for posterity. If you didn’t see it recently, bus service is starting to expand, including changes on the weekends. This comes as a direct result from the one-half cent sales tax increase that was voted on in the Fall of 2016.

I posted this up on Twitter earlier but wanted to put it here on the blog for posterity. If you don’t know already, the transit tax passed in yesterday’s election and the graphic above shows the precincts that voted for and against it. You can clearly see that areas receiving expanded bus service were pro-tax versus areas that were not.

Maybe a little lack of support along the western edge of 540. I wonder if the presence of tolls in that area played a role in voters’ decisions?

At the same time, most of the outlying precincts in Wake were not horribly against the transit tax, only opposing by smaller margins. (some exceptions exist though)

On Nov 8, or now if you’re into early voting, Wake County residents will see this little box on their ballots. This blog, along with a list of other fine persons and organizations, endorse a FOR vote for transit and the sales tax to pay for it.

For downtown Raleigh, and anyone that wants to see the area notch it up on transit-related infrastructure and service, this is a huge addition to the central role that the area plays in the movement of people in our city. The map below shows you how key the core of Raleigh becomes in this 10-year plan.

If you’re looking for a summary of the transit plan that this sales tax increase will fund, along with maps, FAQs, and a breakdown of the monetary side of things, head over to the Regional Transportation Alliance’s wrap up page.

There’s a new podcast out now and its focus is on Transit in Raleigh. I just finished listening to their second episode which is a great interview with our city’s transportation planning manager, Eric Lamb.

Called Inbound Raleigh, the podcast wants to talk about all the different ways to get around Raleigh that don’t involve a car on a street. After listening to the first episode, it really shows you how many different transit-related projects we have in the pipeline. We have bike share, a transit referendum next month, a bike plan, sidewalk expansions, a train station, and a lot more.

The podcast is run by Jennifer Suarez and James Borden, both of Raleigh Public Record fame. (Disclaimer, Jennifer is also married to yours truly.)

If podcasts are a way that you enjoy getting your media then I encourage you to subscribe wherever you get your podcasts and/or listen to Little Raleigh Radio. They have been instrumental in getting the podcast off the ground and always deserve love when they help launch new projects. 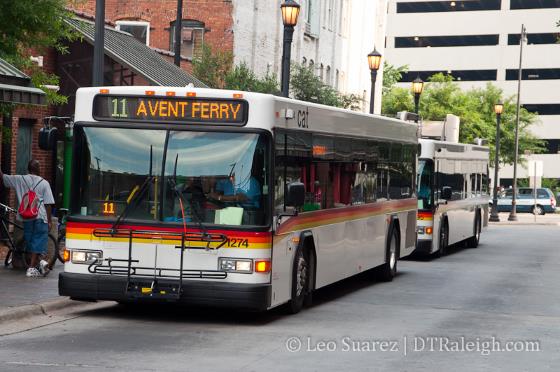 The Wake County Board of Commissioners are in on the recommended transit plan for the county and they want voters to approve a tax increase in order to pay for it.

This week, the vote passed and on the November 8 ballot, we’ll have an opportunity to approve or not a 1/2 cent sales tax increase that will be used for transit. A similar vote has taken place, and passed, in Durham and Orange counties so now it is our turn.

You can read more at WakeTransit.com.

We’ll cover more parts of the plan here on the blog leading up to the vote as downtown Raleigh’s central location and urban nature is poised to be a hub of bus and rail activity if voters approve the tax increase.

I wanted to share the feedback I submitted about the Wake County Transit Plan, which all readers should take a look at. I think a whole discussion could come about the idea of an invisible east/west barrier that goes right down Raleigh. I am hoping that an upgrade to transit could break down that barrier and really expand mobility choices and access to all areas of the city. Does anyone else see these barriers to mobility around our city? -Leo

I’ve taken a good look through the latest Wake County Transit Plan update and wanted to share some thoughts I had about it. I’ll admit that this may be more detailed than the document shows but maybe it is something that the planning team could consider.

I believe there is this invisible “divide” between east and west Raleigh, where Capital Boulevard, McDowell/Dawson in downtown, and South Saunders create a sort of barrier. Going from parts east to west, and vice versa, by any travel method meets a “resistance” when you hit this divide.

Driving a car across Raleigh, the options are slim due to Capital Boulevard’s lack of cross streets, downtown’s more urban nature, and south Raleigh’s lack of east/west streets. Cycling is in a similar situation. Currently, none of the GoRaleigh bus routes go between east and west Raleigh but rather terminate in downtown’s Moore Square Transit Station for a transfer.

I see this Transit Station as contributing to that same invisible barrier.

My feedback as part of this new transit plan would be for the planning team to discuss this and see if transit could break through this barrier and connect east and west Raleigh more directly. For example, a bus route that does not stop in downtown Raleigh but uses both Hillsborough Street and New Bern Avenue/Edenton Street.

Thanks a lot ahead of time and I very much look forward for the successful implementation of this plan!

Thanks for taking the time to review the Recommended Wake County Transit Plan and for submitting your comment.

Your comment fits very well within the key goal of the Transit Plan to make transit “useful” to as many people as possible. Divides and barriers, real or perceived impact how and if people use transit and the focus of the transit plan is to address and solve these types of issues.

The project team has specifically looked at BRT and bus line corridors that flow through rather than to downtown. The New Bern Avenue to Morgan St /Hillsborough Street alignment has been specifically studied. That said, there are different perspectives on how BRT should flow through Downtown Raleigh and connect with the various destinations. The perspectives differ in how radically they would change existing streets, how vehicles would interact with bus stations and how the different BRT corridors would interact with each other. Moving forward we hope to have a clear community dialogue on the options, benefits and costs of the various ways to implement the different projects shown in the recommended transit plan. We anticipate this dialogue will be open to public ideas and reactions on solutions.

Some of the service realities we are asking decison-makers to consider are: (these parallel your comment)

1) As vehicle frequency increases there is less need to stop and wait at big stations and street based platforms (that allow vehicles to keep moving) make more sense.
2) Routes work best by collecting and combining multiple trips – routes that stop in downtown rather then flowing through downtown limit their usefulness for certain trips.
3) Frequent routes tend to be used for shorter trips and riders on shorter trips tend to have a low tolerance for delay (i.e. they will switch to other modes).

Please keep in mind that the transit plan is positioned to provide vision but also to allow a start and evolution approach if that is needed or best for the community. One question we asked staff from all of our partner agencies to answer on each of the projects was “are there multiple ways to accomplish that and still meet the goal?” The recommended transit plan takes this approach not to get “watered down” versions of everything but to keep an eye toward the larger goal and allow the system to change as needed as community perspectives change. National and local positions on transit, what street should be used for, and what creates a great place to live are changing and evolving in ways we have not seen in previous decades and these positions may/will likely continue to evolve.

If you have further questions on the Recommended Wake County Transit Plan please respond to this email, call 919-856-5477 or visit www.waketransit.com