Need an ANOTHER excuse to come out to Transfer Co. Food Hall on a Wednesday night? Well, we’re giving you one this month. Our next reader meetup is on the calendar.

No need to sign up or be on time. We keep these things real casual so come on by and say hello. Our hosts, in addition to myself, this time around include:

We’re hosting an election watch party on October 8. To kick off the early voting, I’m posting about the event that Tuesday night and everyone is invited.

After you’ve voted, and you can do that early right now, come join an informal, non-partisan, unaffiliated meetup at Isaac Hunter’s Tavern for true geekery over Raleigh politics.

We want to put the election results up on a screen and refresh them until we’ve got all the winners figured out. It’s sure to be a good time and I’m excited to be doing this for the first time.

It’s time to get together one more time and meet other readers of the blog and those participating in the Community. We’ve had a great turnout at these things and it motivates us to keep them rolling.

In addition to myself, we have other hosts that you should meet and follow online including:

Hope to see you there.

It’s time for another get-together and chance to meet fellow readers face-to-face.

As always, the more the merrier and we have three additional hosts including yours truly. The folks behind Inbound Raleigh, ITB Insider, and The Acorn will be out mingling with us all and it is sure to be a good time.

It’s time again to put a face to the readers and members of this online community with the first meetup of 2019. Come on over for some happy hour apps and drinks as we discuss downtown, transit, hobbies, and life. (IE anything)

I’m once again playing host with those behind the Oak City CRE Newsletter and Inbound Raleigh, other fine media projects that you should follow and subscribe to.

This is a casual, social event where you can chitchat about downtown Raleigh, transit, development and more. Each time we’ll choose a slightly different mix of area bloggers/podcasters related to Raleigh. We have a lot of fun conversation with amazing people doing cool things in Raleigh!

In addition to yours truly, come meet the people behind: 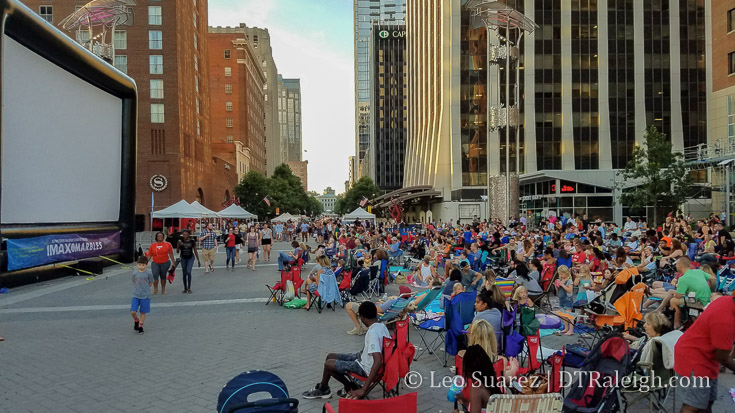 Raleighites sit all over City Plaza waiting to watch a movie on a large inflatable screen. July 2016.

I’m sure you, like me, have heard it all the time from those that worked in downtown Raleigh in the 1980s or even the 1990s.

I get this all the time from those who tell me stories about how huge the ongoing revitalization of our city center really is. Through the eyes of downtown workers who’ve been here for decades or just Raleighites that have been around for awhile, the supposed “death” of downtown was official.

When that happened exactly is up for debate but today, our downtown isn’t dead. It’s actually been reborn. (or maybe resurrected?)

For me, the opening of Fayetteville Street on July 29, 2006, was the day downtown woke up again. The Raleigh Wide Open event that day had tens of thousands of people on Fayetteville Street. Downtown supporters were hopeful that things would improve.

Now you could argue that downtown wasn’t ever truly dead. There were still some bars and Artsplosure has been hosting large festivals since 1980. I wasn’t in town to experience this first hand so I’d love to hear more about downtown Raleigh in the 1970s, 1980s, and 1990s in the Community.

However, when you look at investments in development, new retail and restaurants, and the rise of a residential population, things like these seemed to have happened in the mid-2000s. The Fayetteville Street reopening, along with a new convention center, marks the inflection point where downtown growth started to really rise.

To keep things hot, events seemed like the tool to drive the crowds through the downtown real-estate “butterfly net”. Fayetteville Street was and still is, built for events with easy to use power hookups, nearby parking for thousands, the widest sidewalks, and a killer street view.

It may still be the center stage of outdoor events in Raleigh.

Since 2006, I’ve watched events come and go with more and more piling on to the downtown streets. It seemed like a good thing as more restaurants opened, more retail opened, and the resident population continued to increase. We were doing something right, no?

Somewhere between then and now, it seems like we got good at this downtown event thing. Almost too good and rumblings of too many events started to creep into the downtown dynamic.

Streets were closed too often they said. The events were too noisy they said. Downtown was overrun. So they said.

The city was the first one to back off a bit with the growing Raleigh Wide Open event, the one that kicked everything off, being discontinued. We didn’t need it anymore and the event sort of ran its course was the logic behind it if I recall correctly.

It seemed fine because locally everyone was talking about how many events there were in the warmer months. (a lot) May and September are power event months, still, in downtown Raleigh and numerous food truck rodeos, beer festivals, and marathons would kind of fill in the rest.

We also once had a huge water slide in Glenwood South. 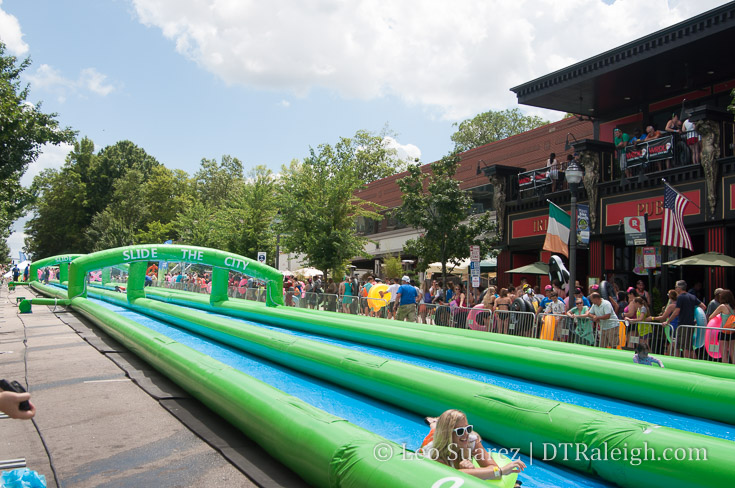 Slide the City event in Glenwood South. May 2015.

Now let’s be clear. My headline isn’t meant to say that events are no longer welcome or needed in downtown these days but rather, events aren’t what’s making downtown anymore.

We’ve done it. This downtown thing has stuck and a foundation of people-centric, downtown activities has infused itself into the city’s culture.

There’s less need for closing downtown streets, blocking sidewalks, or continuing to pour effort into events. Now that the foundation has been laid it’s time to build on top of that momentum.

This year, the city moved its July 4 fireworks party from downtown back to the fairgrounds. The Downtown Raleigh Alliance (DRA) has moved its Wednesday Farmer’s Market to Market and Exchange Plazas, activating a pedestrian space while keeping City Plaza free for natural interactions. I’m not a runner but I wonder if the number of marathons in Raleigh has leveled out with the Rock ‘n’ Roll marathon series and the Ironman triathlon ending their run this year.

More so, the evolving DRA is easing off the gas pedal on their push for events. Their latest strategic plan explains:

Over the past two decades, a special events strategy and focus has helped fuel the revitalization of Downtown Raleigh. However, as the community has grown, the impact of special events to those stakeholders generates a mix of opinions and positions. Public input regarding events is varied – however, there is a strong indication that Downtown’s success in attracting and hosting events could use a more empathetic, collaborative approach that acknowledges that events can cause disruption and inconvenience to some area residents, business owners, and people visiting Downtown to worship. Additionally, there is an appetite for intermittent, smaller scale activations – particularly in neighborhoods such as Glenwood South – as opposed to an expansion of major events that involve road closures.

With only so many key event weekends, now all filled up, the downtown event “marathon” has matured. We have a sizeable downtown population that’s taken root and downtown workers keep coming. What might be the next layer on top of this?

Could transit be the next rise over the next ten years? As the Wake Transit Plan comes along through 2027, downtown Raleigh plays a critical role. I believe that to be serious about transit, bus routes will need to have priority and with higher frequencies, you can’t have streets constantly being closed. The opening of Raleigh Union Station may start the wave of rail transit into downtown and it’s complimentary bus station may push that even further.

Will the downtown resident population become more organized and vocal over the next ten years? The coveted downtown grocery store will finally land, twice, with Weaver Street Market coming to The Dillon and Publix coming to Peace. (Smokey Hollow) Housing is becoming a hot topic so maybe we’ll see denser development around downtown as a way to support the transit that’s coming.

The point is that events aren’t seen as the revitalization tool it once was throughout the late 2000s, in my opinion. Downtown Raleigh is looking for its next big boom to build on top of that and continue growing.

Another season, another great time for a reader meetup. I hope some of you are in town the week of Memorial Day because if you are, come join us at the London Bridge Pub on May 30 from 5-7pm. The format is casual and the folks that come out are always a classy bunch.

Our hosts for the evening include:

I think this one will be a good one. See you there.