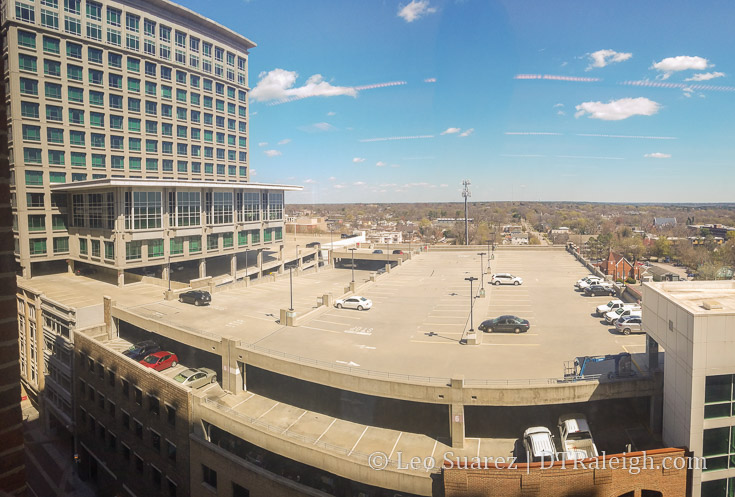 The top floor of the Red Hat parking day on a typical Friday afternoon.

A month or two ago, thousands of visitors descended on downtown Raleigh for a convention at the Raleigh Convention Center. Some may have been in hotels nearby but most were driving into town and were looking for parking. The decks underneath the Marriott hotel and city plaza were open and cars filled them as usual.

The problem? No one, or no technology, was there that day to tell those visitors that those areas were for monthly pass holders held by office tenants nearby.

This breakdown in the system that day caused delays and frustrations by office workers. I saw this in my officemates that drove (I happened to walk in that day) and showed up stressed because unlike a typical day, the parking decks were slammed.

It didn’t help that the convention kicked off with a 7 am breakfast that hundreds (thousands?) showed up for, beating the office workers in that day.

This is one example of many showing that our parking supply is reaching a maximum and headaches like this give downtown a negative image to a certain degree.

It’s being worked on though. The feedback is loud and clear.

Parking in downtown is not as easy as parking in the suburbs.

There’s part “duh” to that statement, said by a lot of downtown businesses and office tenants. Some people don’t mind but it helps when their company is large and commands hundreds of dedicated spaces for themselves, whether they use it or not. (see above photo)

What we may be facing soon is the large build-out of parking decks in the 1990s and 2000s has now reached near capacity. I’m starting to think that the decks along Wilmington Street (City Center deck, Moore Square Station Deck, etc) were actually a major asset in recruiting business and fueling the revitalization of the 2000s and 2010s.

What I LOVE about Raleigh is that we are at least asking the question, “Is this the downtown Raleigh that we want to keep building?”

I feel that the city is 100% acknowledging that structured parking is expensive. In my opinion, I feel the city should be a partner in downtown parking management rather than being in the business of it. 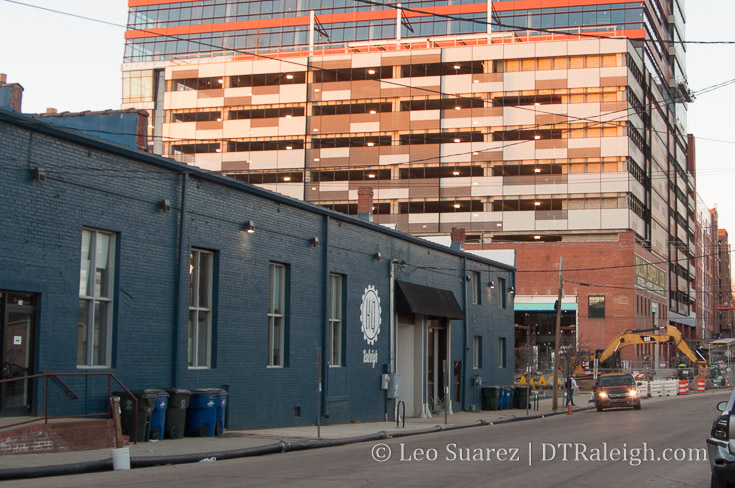 Lots of privately-built parking at The Dillon.

For example, the city is leasing spaces in the 1,000+ space deck at The Dillon in order to support the upcoming Raleigh Union Station. Rather than build it themselves, we have a public-private partnership to help spread out the cost and leave the city flexible in the future.

Instead of the city building more parking decks, offering alternatives to get in and out of downtown must be explored.

When it comes to bike accessibility, more bike lanes have been placed over the past few years. This summer, we should see Raleigh bikeshare up and running. Bike corrals have been popping up. We’re also experimenting with cycle tracks.

Frequent mass transit is the eventual goal to take pressure off the parking problems in downtown Raleigh. With the 10-year transit plan only really starting in 2017, we’ve got a long way to go.

So how do you implement short-term solutions until bus-rapid transit, frequent buses, and a commuter-rail line are running in 2027?

The TBJ (subscription required) published an article about this very thing. The headaches caused by a thin supply of parking are forcing those behind-the-scenes to come up with new ideas.

Everything from reducing parking space sizes to paying businesses for unused spaces is being considered.

I’m going to pick on Red Hat, their parking deck is shown in my photo at the top, but the same applies to other companies in downtown Raleigh as well. I can easily guess that the fine folks there tend to work remote on Fridays as seen from their lack of cars in their deck every Friday.

We have to start dropping the mentally that spaces are for a specific company or use. Spaces are for cars to sit in. What the person then does afterward doesn’t matter.

I’m not sure what that might look like but when you take into consideration that structured parking costs around $20,000 per space, you can see real savings here spending money on innovative solutions rather than doing the same old same old.

I think this will be important to follow and I’m hoping that we can get it right. A mishandling of this issue may slow downtown development momentum as transit is coming but still a ways out.