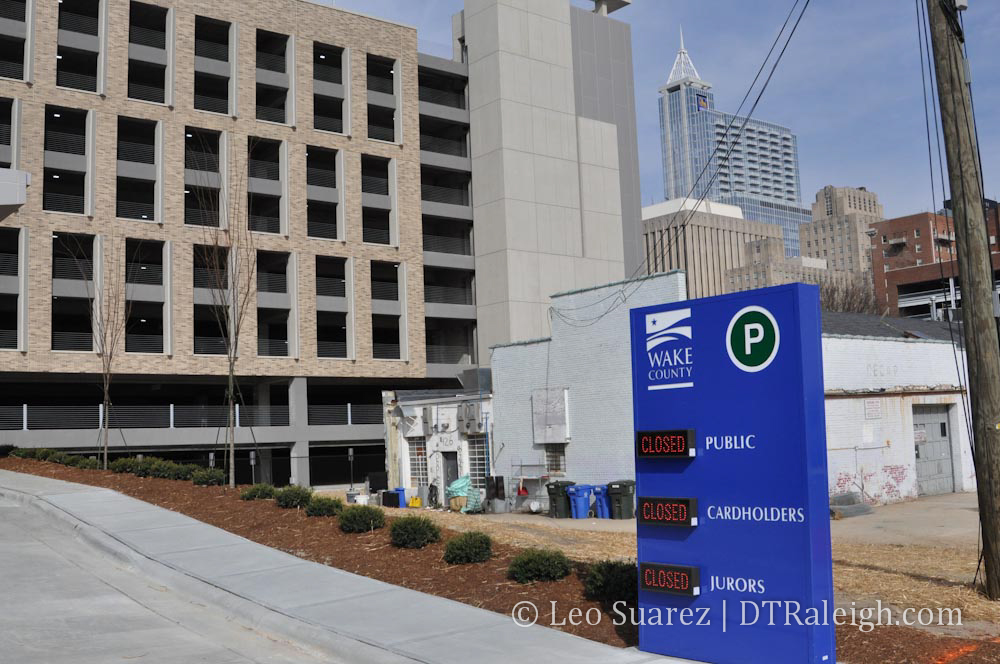 Some people love to get into intense debates over a variety of topics. Apple versus PC. Romney versus Obama. State fairgrounds July 4th versus Downtown Raleigh July 4th. You get the idea.

I’m not so big into these but I absolutely LOVE talking about parking. There’s something about moving all those 2,000 pound metal boxes on wheels in and out of an area that I think gets the problem solving juices cooking. Especially when it’s in downtown and people compare it to the suburbs.

I’d like to go over some of the parking issues downtown faces today and what might help improve them. Most of this comes from what I hear talking to visitors and residents and there is an ongoing theme here.

Parking is a lot like transit. The service has to have some basic respects to all the users. Whatever a visitor is coming downtown for, eating, drinking, recreation, the experience can be hindered or enhanced by the accompanied parking experience. It must respect the things that are valuable to us, some of those being comfort, time, money, and safety.

Perception #1: “Parking in downtown is confusing”

Downtown has on-street parking, parking lots, and parking decks. These spaces can be owned by the city, the county, the state, or a private company all with their own enforcement hours and rates. Some take coins and credit cards but no bills. Some take it all. Others take cash only. Some have tellers that you can work with and some have metal boxes with little slots for you to insert your money. Some charge on special event days and others do not.

You see where I’m going with this? I feel that this inconsistency in parking rules and regulations can hurt some visitors’ experience to downtown as it may be a new story each time they arrive.

It is important to note however that the eight city owned decks are very consistent with each other. Except for the special occasion only Performing Arts deck and the required 24-hour enforcement deck under the Marriott, the other six are exactly the same. However, some may not see it that way as I bet only very few Raleighites are aware of the deck ownership situation.

The experience of “going downtown” can be lessened because of this inconsistency. If there was a way to somehow standardize the parking experience and create some kind of consistency between parking in one area and then being able to assume it’s the same elsewhere, the experience would be enhanced. This could include small changes including all decks accepting credit cards and all types of currency or something more controversial like a city-wide set parking price.

An easier experience in this aspect pays respects to downtown visitors’ time as they will know what to expect beforehand. This lowers the “obstacle” that parking in downtown can be when compared to a shopping center in the suburbs.

Perception #2: “Parking in downtown costs too much”

Oh I love this one. You’ll occasionally meet those that view a parking fee as just another tax. The reality is that the commodity of parking lots in downtown and decks cost money and to use that commodity, Joe Consumer must pay the fee.

Downtown Raleigh has some of the highest property values in the city and to dedicate that space to parking a car for free when demand is high makes little sense. We’ve talked about some examples where the spaces are worth more than the cars that sit in them!

It’s more appropriate to think that a shopping center in the suburbs has zero fees rather than being free. The cost of building and maintaining a parking lot in the suburbs is all calculated down and the owner then puts that cost back into the leases. If the parking lot cost goes up, leases go up, and so do the prices of the goods sold that consumers buy. It’s like a hidden cost that people either forget about or just don’t know exists.

So the theory goes with a downtown where businesses don’t have to pay for parking, the consumers now have a choice. Want to park close to your destination? We have that but it’ll cost you a few dollars. You could choose to ride the bus and pay a little less. Or, if possible, you could ride a bike or walk at no charge. If you believe in this theory, then walking to or riding transit to a shopping center makes little sense because you have to pay the price that the business puts into their products to cover the cost of the parking lot anyway.

Now let’s talk about the parking decks in downtown. The city owns eight parking decks and sets a competitive hourly rate to park in them. With a larger supply like this, the city has leverage to keep rates low among competing decks. We actually have some of the lowest rates in the country according to the 2011 Colliers International Parking Survey. The city also dedicates a large portion, around 75%, toward paying back debt, some of the highest in the country. This is good to hear as we are currently digging ourselves out of a hole because of the down economy.

Based on our city’s size, I say downtown is doing pretty well on the parking cost game. Educating citizens on this may be necessary but the low parking prices in downtown pay respect to our wallets, directly at the teller as well as indirectly through our city taxes.

Perception #3: “There is never enough parking in downtown Raleigh”

For five blocks, vehicles have access to six parking decks consisting of over 5,000 parking spaces. Add the surface lots and you could push it to 6,000. This is the densest area of parking in the city. The five blocks with parking decks along Wilmington Street have a total area of about 10 acres. Do the math and you get an estimated 500 cars per Wilmington deck acre.

For access into the city core, this is also one of the best places to go to park and walk to your destination. The Fayetteville Street district is the most pedestrian friendly area so getting to a deck quickly and walking is the best option.

Perhaps more people need to realize this and get to know the city’s Parklink program. Keep an eye out for the blue Parklink signs around town and you’ll know you are working with city owned decks or lots. Did you know they have a Guide (pdf) with some great information? I think the included map, shown below, is THE source for parking information in downtown. 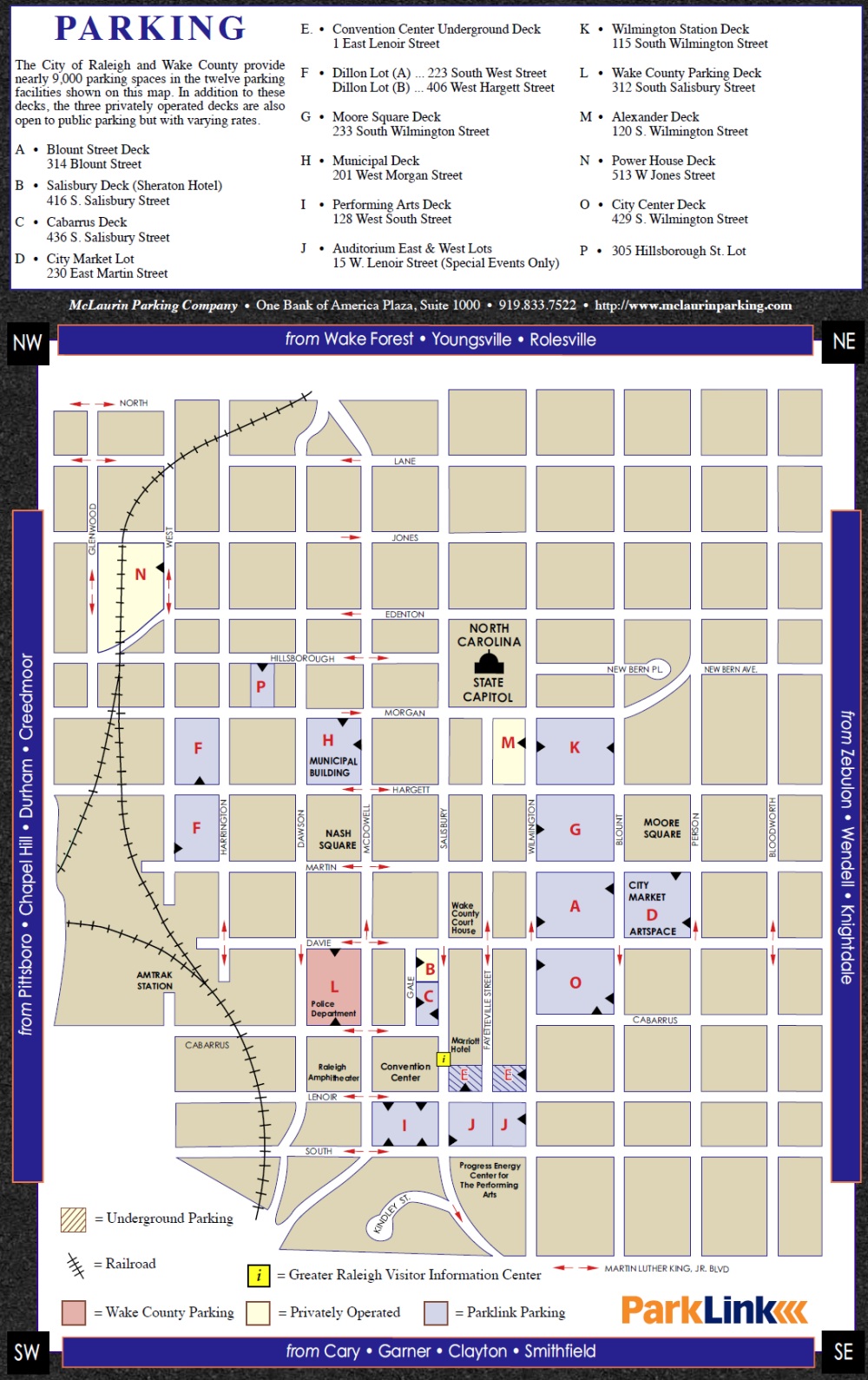 The city has had success in tweaking the parking situation over the last few years. Better resources on the web are available as well as increased signage on the streets. Over the next few years, the city’s parking program will work to fine tune the prices of deck parking versus on-street parking. This has been delayed because of the debt that needs to be paid and the down economy but it is in the works.