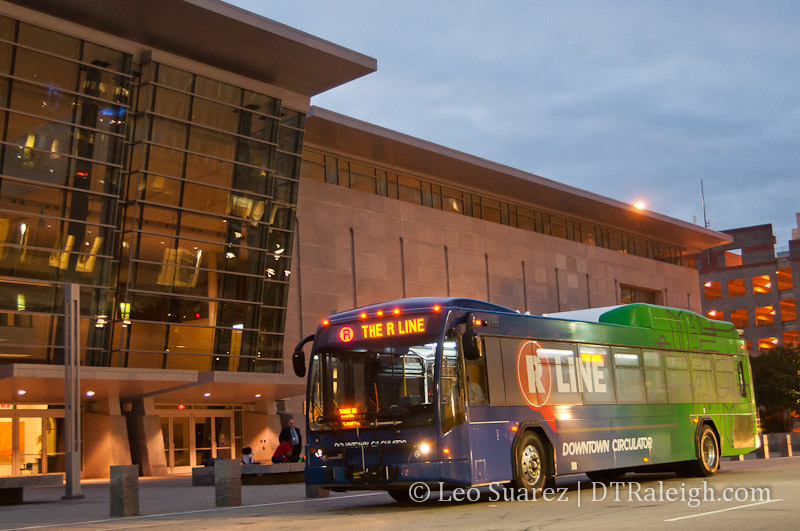 One of downtown Raleigh’s hot topics this year has apparently been the R-Line. If you’ve been following, there are a slew of stories about the perceived unfairness of the fare-free bus circulator that operates seven days a week. With upcoming fare increases on other routes of the Capital Area Transit (CAT) system, the R-Line is being looked down upon by certain Raleigh individuals.

My take on this is that the R-Line is being politically micro-managed and we should let the transit planners have a say.

The route was first introduced in February of 2009 with a dedication ceremony in front of the Raleigh Convention Center. It’s important to note that the R-Line was one piece of a much larger puzzle. The Convention Center had just opened around that time. The Fayetteville Street makeover was still pretty fresh. City Plaza was less than a year old.

These were downtown improvements made to attract more visitors, create more spending, and create more businesses. From a city point of view, that means paying back the investment in downtown and generating more tax revenue. Cities do this to sustain a high-quality of life, which Raleigh has, with a fair or low cost of living.

A lot has happened over the last five years though.

Events have been one of the largest driving forces behind downtown Raleigh’s growth. Fayetteville Street events used to close off one or two blocks. Moore Square events could be contained within the park itself.

Today, downtown is bursting with events.

An interesting statistic would be the growth of attendance and size over the years. I would put money down that that number has increased year after year.

You have a pretty good chance of catching an event on Fayetteville Street on any given weekend these days. From mid-August to mid-October, downtown is crawling with events and people. Spring has another spike in events that seem to take over. Parking decks are as or more full on weekend nights as they are during the workweek hours any weekend of the year.

It also seems that every marathon that comes to town wants to run their route through downtown Raleigh. We’re not talking just a few, but several dozen closing streets on random weekends.

So what does the R-Line have to do with downtown being the host with most?

A strategy (the R-Line) to make our public investments (Convention Center) more attractive became hugely successful and everyone wants to get a piece of it.

And why was it successful? In my opinion, the R-Line is run like most bus routes should be run. No timetables and a higher frequency of buses passing by.

It was also the first city bus route, to my knowledge, in Raleigh to have GPS tracking. Those with smartphones could see the bus location before heading out to the bus stop. With all the amenities and ease of use, it was implemented very well and has become successful.

Over the years, Raleighites have adopted it. The original purpose is still intact, with the buses moving conventioneers around downtown. The event-driven downtown has used it for moving people between venues. The growing resident population has used it to travel between districts. With a stop near the Moore Square Transit Center, CAT riders have also used it as either the first or last leg of their trip when getting around.

With a diversity of riders, sounds like a success story to me.

Today, the R-Line’s fareless system is being picked on. With an upcoming 50-cent increase in fares over the next 2 years on every other CAT route, there are some vocal citizen advocates that think this unfair, with one individual quoted in an N&O article calling the R-Line racist.

Opinions and proposals on the R-Line aren’t hard to find either.

The articles linked above mention issues such as fairness, equity, and cost. Expanding the route would cost more. How can you make the R-Line more fair? Should all riders have equal access and the demographics of riders be diverse?

We’ve definitely lost sight of the original purpose of the service, which is to move visitors (from hotels and the convention center) around downtown. 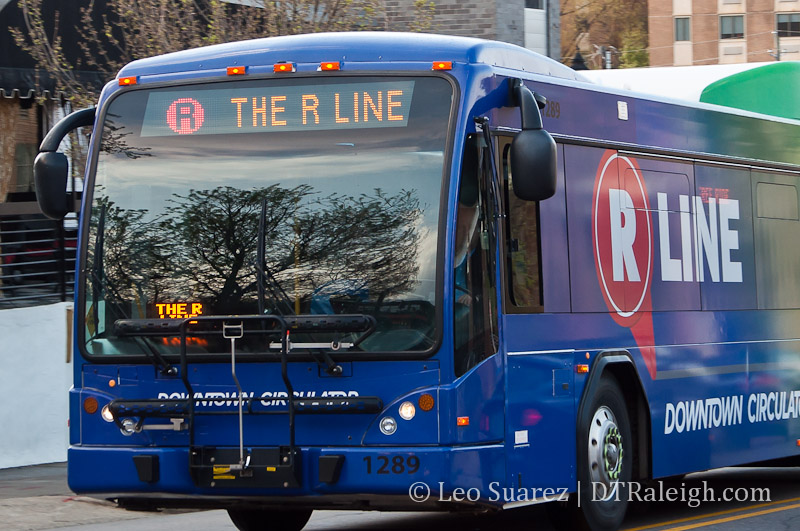 What we have today though is a situation where the R-Line is so successful that groups want to either copy the R-Line model or modify the current route to include their neighborhood or business, with complete disregard to the overall system that the R-Line is a part of.

In 2013, the Midtown Raleigh Alliance teased an idea of an M-Line between North Hills and Downtown Raleigh. I wrote about the idea and how it compared to the currently in place Route 8 – Northclift CAT route. They seem similar.

In 2011 and back again this year, Cameron Village and nearby residents are petitioning to change the R-Line route to serve the shopping center and the neighborhoods around it. I wrote about it back in 2011, and it’s pretty applicable this year too, that Route 12 – Method and Route 16 – Oberlin both have been providing a link to and from Cameron Village for years.

You also have residents in Oakwood and Mordecai that think the R-Line should swing more north to serve the growing Person Street District. In the linked articles, there are opinions that the R-Line should go more east instead of turning around Moore Square only. CAT routes serve those communities today.

Finally, I’ve heard that the upcoming 10-year Downtown Plan has a pretty healthy section on the R-Line. The draft release of that is scheduled for September 11, blog post on that soon.

It seems the R-Line has now become politically infested. It works so well that others are upset that it isn’t serving their communities. I predict any outright support for the R-Line would be seen as a politically bad move at this point.

I wrote this in the 2011 post about the R-Line going to Cameron Village:

“In my opinion, the petition just shows this area’s readiness for an upgrade in transit “

Raleigh, you are ready to level up. It is time to put on your big girl pants and commit to moving CAT to the next level.

Raleighites should stop picking on the R-Line and start getting behind seeing more money in the budget for the CAT system. Raleigh should hire some top transit talent to guide us in moving to the next level.

With a cohesive and easy to use transit system, funded by all Raleighites, priced fairly for the service it provides, we will stay on the top 10 lists for decades to come.