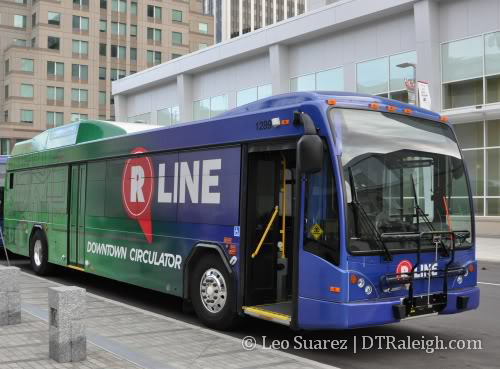 A month ago the R-Line started making its rounds in downtown. Today, yet another Friday the 13th, is time to look at the past month and discuss the new downtown service. RalCon’s page to rep the R-Line is here or through the link at the top.

I have no hard numbers to show but from what I have seen and heard, the ridership is busier during the most obvious of hours. Lunch during the weekday and Friday/Saturday nightlife hours are the most popular times to see groups of people on the R-Line. I’m rarely in downtown during the lunch hours so I’ll trust the few people who have told me this, including one of the bus drivers. There were about 10-14 people riding on the few Friday and Saturday nights that I have been on. I’m not sure what the city expects but these seem like solid numbers in its first month of service. As with anything, it will take some time for people to absorb the R-Line and incorporate it into their routine. As for visitors and convention center mobs, they are steered toward using the R-Line with the Downtown Raleigh Alliance’s new marketing campaign, You R Here, which is a great looking website and I applaud them for re-designing the site.

The R-Line is pretty convenient and it makes downtown seem a little smaller. Fayetteville St. and Glenwood South are now a short ride away. However, it is a game to see how long you will wait at a stop for a bus. I have not seen any times posted so I’m guessing the bus is not on a set schedule. There have been times when I have caught the R-Line the minute I walked up to a stop. Other times, I have seen it pull away as I turn the corner resulting in a ‘long’ wait. The 10-15 minute wait time has been accurate though and in my experience, I’ve rarely waited more then 15 minutes. While not necessary right now, a website similar to TranLoc could be created to show people the bus’s current location. A mobile version of this website would be even more powerful, especially now that the city is flirting with the idea of bringing free wifi all over downtown. Its just an idea but not needed right now as the bus is pretty convenient overall. 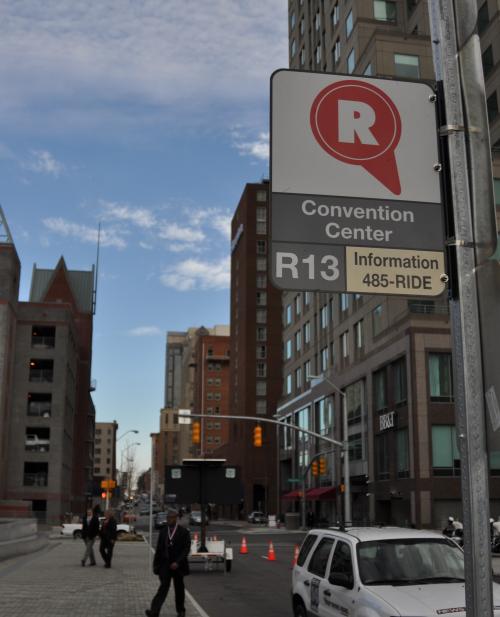 The R-Line stop signage may need a little upgrade. On a positive note, the signs are large and clear with the stop name and number at each location. The problem with the signs is that a casual pedestrian that does not know of the R-Line is not well informed. There is a number to call but I think it would be much more informative if a map and route were shown on the signs. Also, the extended route after 6:30pm needs to be highlighted so people are not confused by the change in route.

Have you seen the buses? They stand out pretty well in the middle of traffic and draw attention to themselves. This should self promote the R-Line and get people talking. Also, the hybrid buses are noticeably quieter then the CAT buses coming out of Moore Square. Another thing I’ve noticed is that the buses sometimes look too big and making turns can be a little tight at times. In some instances, I’ve seen cars backing up to let it pass. This might take a slight tweaking of the lines on the street so that the R-Line can flow more smoothly.