I have been invited to write a column over at the Raleigh Public Record about urban issues in Raleigh. I plan to elaborate more on some of the thoughts that make it here on the blog and others that don’t. I’m hoping this challenge will push me to get out more, gather more data, and talk to more people in order to inform and get people thinking.

In the first article, I talk about historic preservation and what citizens can do to preserve buildings threatened by “progress.”

Whether you know it or not, citizens can nominate structures and work with the commission in order to seek approval for historic designation. This action could possibly save a building from the wrecking ball. Landmarked structures qualify for preservation review and some can be protected.

*To Protect and to Preserve, Saving Historic Structures in Raleigh 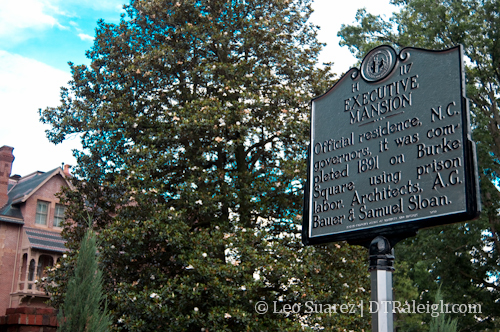 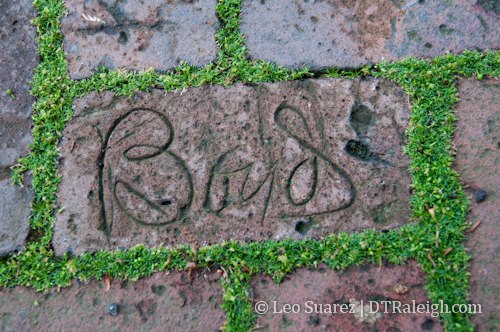 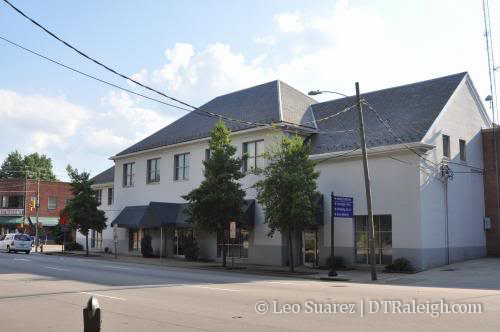 High-speed rail and train travel out of downtown sounds like a thing of the future to some people. To others, its a thing of the past now that cars are king and planning of our cities happen around it. It’s no surprise that cities across the country have demolished or abandoned their train stations.

In case you missed it, we’ve mentioned before that Raleigh actually still has its Union Depot, now re-purposed as an office building. It will probably never see trains again but the warehouse district around it continues to have trains roll by. Its possible to uncover some of the older tracks that once ran through here. Let’s jump straight to the maps. 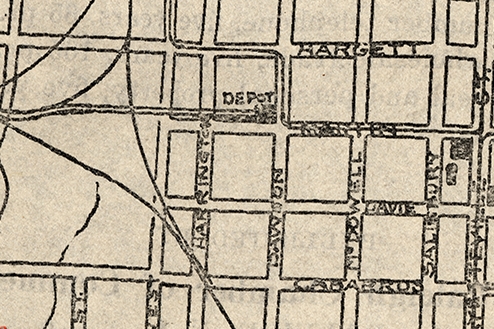 Above is a map of the area around Nash Square in 1914. Union Depot is marked on here as ‘Depot’ and you can see the old tracks leading up to the back of the building coming from the west. 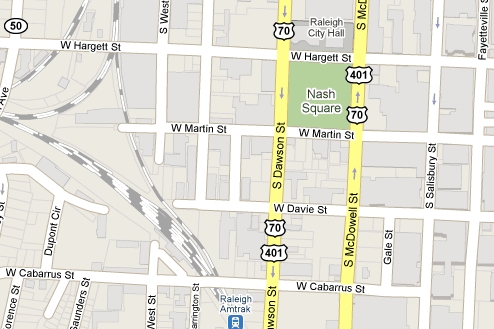 This is a current map overlaid on top of the previous and it is obvious to see that the tracks are not there anymore. You can use a more interactive old/new map overlay at the North Carolina Maps site where I got them from. They set up a very slick Google Map to show this.

The truth is that the tracks were never torn up and are blatantly noticeable if you walk around the warehouse district. The tracks that used to lead up to Union Depot can be seen on West Street, they continue through one of the Dillon warehouses, and there are suspicious cracks along the asphalt leading up to the office buildings behind the old depot. 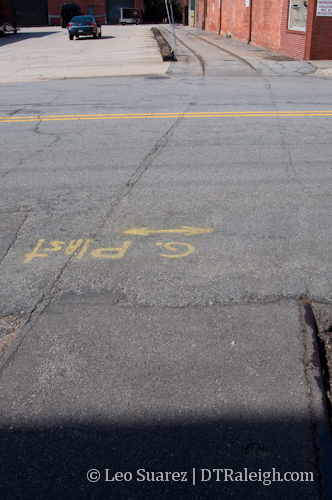 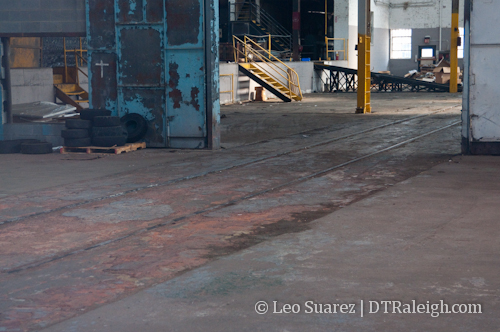 Tracks running through the Dillon Warehouse. 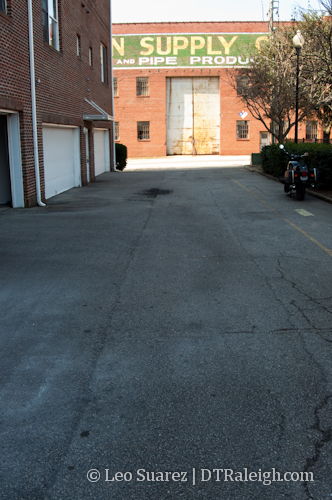 Harrington Street. Look for the cracks in the asphalt in neatly spaced, parallel lines. 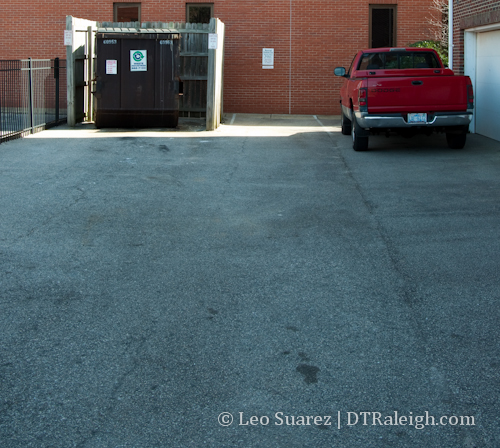 The tracks lead up to the offices and disappear underneath.

Next time you are walking in the area, look for the tracks and imagine that at one time passenger trains were unloading people right into Nash Square and a few blocks from Fayetteville Street. 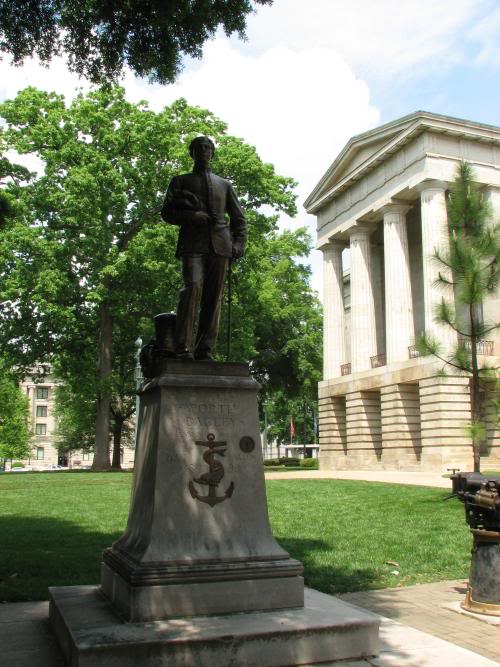 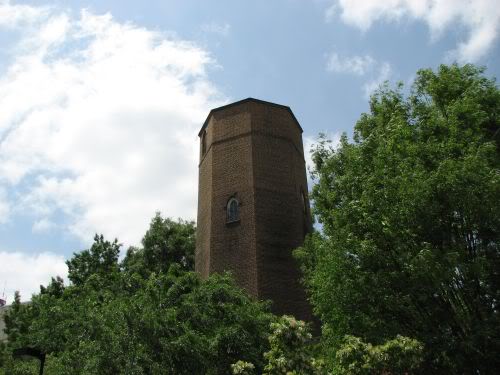 The Raleigh water tower was built in 1887. It now houses the N.C. Chapter of the American Institute of Architects. 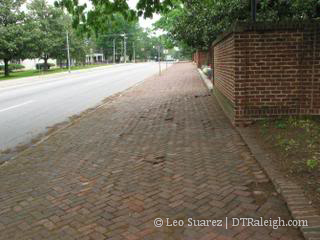 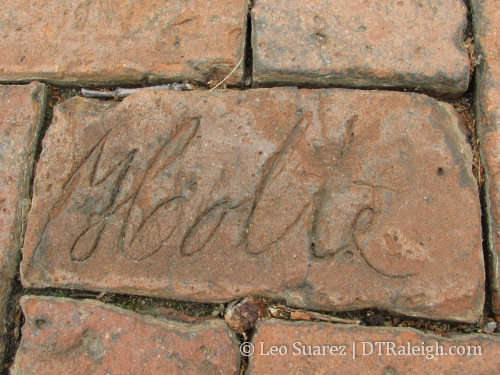 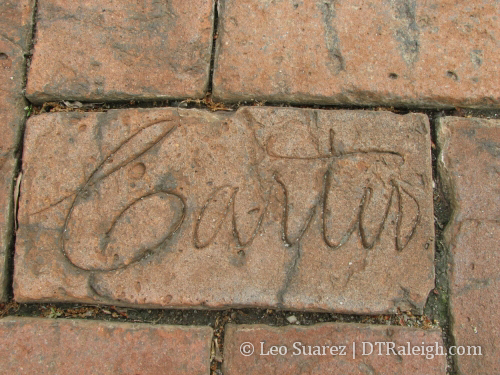 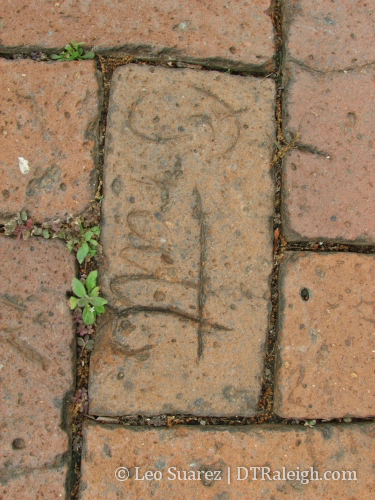 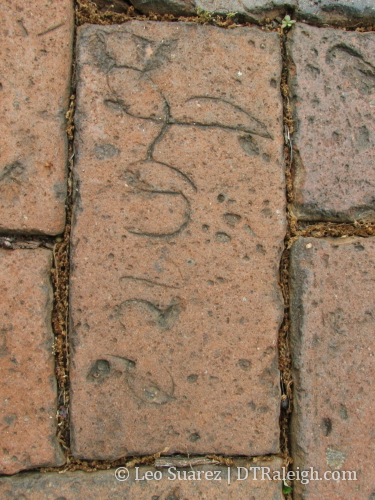 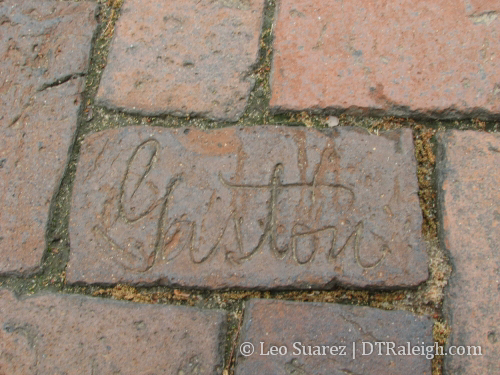