If you have been taking a break from the Clarence E. Lightner Public Safety Center drama you may not have heard that at Tuesday’s city council meeting, the decision to move forward on the project was delayed again. I highly recommend watching some of the debate, posted on-demand at the city’s website here.

The plans for the “skinny high-rise” of downtown, as Councilman Bonner Gaylord calls it, has been challenged. Now talks of an alternative plan, simply called Plan B, present a scaled down version consisting of multiple buildings spread across the city.

During the meeting, Councilman Gaylord tried to set the record straight on some misconceptions on the issue. Here are some that I thought were interesting.

Mayor Meeker had something to say about each point after it was presented and watching him in action really shows you that he is 100% behind this project. Here’s his recent plan to get the building under way.

Just for a comparison, the original tax increase was 3 cents over a five year period, a pretty solid decrease in my opinion.

The comments are open for opinions and debates, maybe some predictions on how this story will end.

Side note:
Quote from Bonner Gaylord:

In my experience, very few people even knew about the Clarence E Lightner Public Safety Center. I never heard anyone bring it up at all until it came before us in December.

Three of the eight members of Raleigh’s City Council came up with another idea this week about what to do about the the Clarence E. Lightner Public Safety Center. 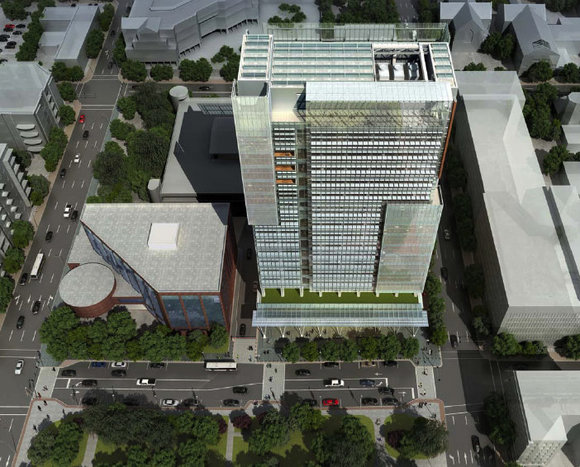 Today is a day for the downtown skyline fans as the proposed public safety center, named after Mayor Clarence E. Lightner, is put in front of the Raleigh City Council for approval. A ‘yes’ vote comes with a tax increase later on even though the price tag has fallen some due to the slow economy. A ‘no’ vote will probably send the project back for re-evaluating and some expected cost cutting. Its a tough call but investment in the city’s safety needs, those that are planned to grow over the next few decades, should not be cut too short.

Read these N&O articles as a prerequisite, from where the above rendering is from, and stay tuned to your favorite news source later this afternoon to find out what happens.

[UPDATE]
The decision was delayed. See you in two weeks.

The Raleigh City Council received information about the Clarence E. Lightner Public Safety Center at its meeting on Jan. 5. No vote was taken. Council members will resume discussion of the project at its next meeting on Jan. 19.

A lot of new talk in the last two weeks has been about the almost $700,000 for the art pieces in the new building. This amount comes from the 0.5 percent of funds required to be allocated to art in new public buildings. This was passed about a year ago. The new safety center is estimated to cost $140 million. Double check the math but 0.5 percent of that is where the $700,000 comes from.

With that said, there are a couple points I want to mention.

At the same time, I do not believe it is unreasonable for the planners to provide a cost/benefit report of ALL public buildings. Morale and pride are hard to measure so you will not see this in any report. There has to be some kind of balance between getting the job done with the absolute bare minimum and approving Picassos for the showers on the top floor. What would you rather have; a council that provides its safety force the right tools for the job or one that provides the tools and expects the job done with what is provided? The naysayers on the council need to provide evidence that there is excess in the safety center’s plan in order to convince me otherwise.

Another point I want to bring up is the very fact that the $700,000 is being questioned. 0.5 percent of funds on all new public buildings will go towards art. That rule was passed. Done and done. You talked the talk now walk the walk. How can some members of the council simply renege this requirement just because it is a down economy? If the 0.5 percent art commitment is dropped, what other things will be dropped? What kind of example is this setting for future developments?

A compromise is more appropriate in order to get the $700,000 worth of art in the building. Why not agree for it to be bought at a later date or be purchased in small increments over several years. In my opinion, a compromise because of the current economic state is fair but dropping it completely shows a weakness in the council to ‘stick to its guns’.

If you want some additional reading before the discussion by the city council today, consider these reads:

The recent call by Wake Republican Party chairman Claude Pope for a referendum on the construction bonds for the proposed $205 million Lightner Public Safety Center in downtown Raleigh met with resistance from the mayor and city manager. “This decision is about public safety, not politics” Mayor Charles Meeker said.

via Let the voters decide on debt – News – NewsObserver.com.

Cutler said between 1,800 and 3,900 jobs would be created by the construction, factoring in contractors and builders, as well as indirect employment from services such as coffee and food. 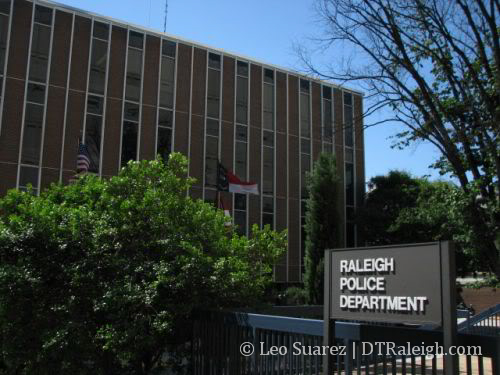 On Tuesday, May 20th, city manager Russell Allen proposed his budget for fiscal year 2008-2009. The entire proposal with details can be read here. There are some elements to the budget that affect downtown Raleigh and one of the major ones was for full funding on the Clarence Lightner Public Safety Center. There are other projects listed but the safety center is planned to gobble up $226.1 million over the next five years. The addition of more space and consolidation of current safety related services can only be a good thing for the city.

The new tower will sit on the corner of McDowell and Hargett St. This will require the demolition of the current Raleigh Police Department. We are getting a major upgrade and what should be a building built right up to the sidewalk compared to the current building with parking out front. Little details have popped up but this is from an older RalCon post: 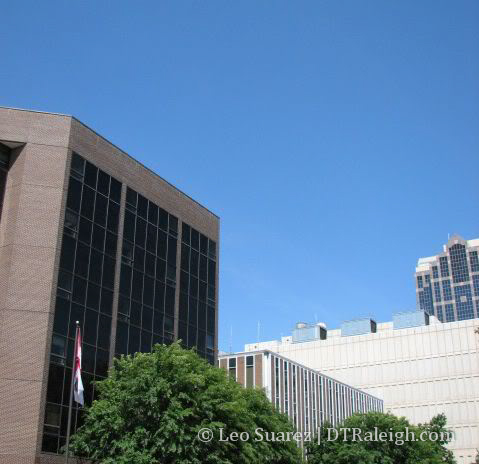 15 stories will easily fill this gap.

I heard about this before but here is some official information on the Lightner Public Safety Center. I’m anxious to see how the designs turn out because a 15 story tower at this location will add to the skyline. It’s nothing major but you will be able to see it coming into town from South Saunders St. and even Morgan St. Looks aside, the building will greatly assist our the city’s safety needs, I support it.

The Raleigh City Council has approved the selection of Kling Stubbins/Cherry Huffman to provide design work and other professional services for construction of the Clarence E. Lightner Public Safety Center at the Avery C. Upchurch Government Complex.

Stubbins/Cherry Huffman was cited by City of Raleigh staff for having extensive experience in public safety, call and command center and technology infrastructure design and construction of major 911 call centers and Federal government buildings. The company also has extensive experience building design and construction of energy efficient buildings. The City may also contract with public safety specialty consultants to assist with meeting the needs of the public safety departments through the design process

The Clarence E. Lightner Public Safety Center will be located on the corner of Hargett and McDowell streets, currently the site of the City of Raleigh Police Department headquarters.