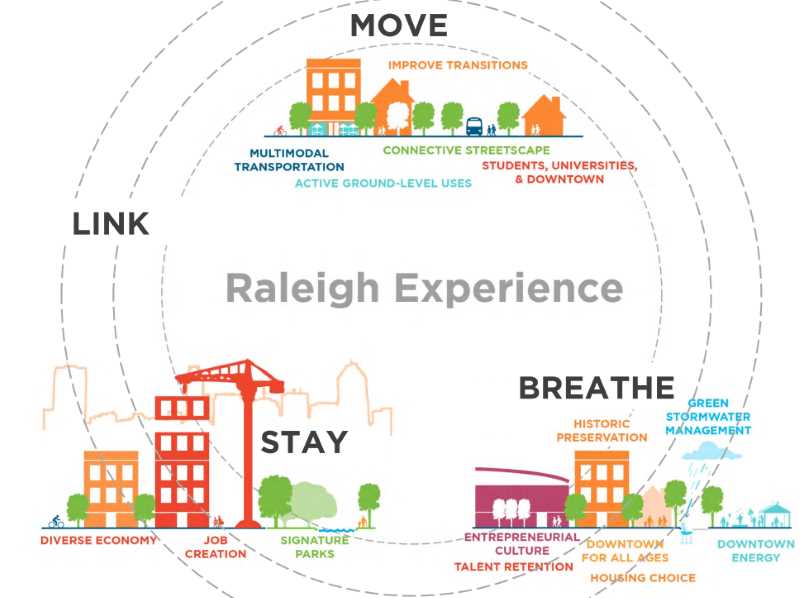 I’m throwing this post up to kind of go over what was presented a few weeks ago at the 2014 Downtown Plan Presentation. I highly recommend watching the video but going over the high-level concepts here works too. There’s no new content in this post if you have already seen the video.

At the start of the presentation, the presenters make it clear that at this point, the big ideas are out there but the details and the action items have not yet been finalized. We’ll have to wait for the final report to get into those.

An important keyword to remember is “Abundance” and the presenters use this often in describing what has been put together so far. By abundance, they mean that creating many experiences within close proximity only brings more value to the downtown.

A thriving city is worth more and has more value than the sum of its individual parts.

Some of the main concepts that we’ll see in the upcoming plan are:

Importance was placed on making Raleigh unique rather than playing “catch up” with other cities. We’re at a good point in our growth period as we’re not overbuilt and don’t have old, obsolete systems in place that may hinder bringing in the new.

Accessibility was also emphasized. Downtown is great but there is more to the city than just that. Connections to and from downtown Raleigh are important so that all Raleigh denizens can take in the planned experiences.

The vision from the downtown plan’s advisory committee is to celebrate Raleigh as a hub of innovation, creativity, and entrepreneurship while maintaining authenticity and inclusiveness unlike any other city in the world. 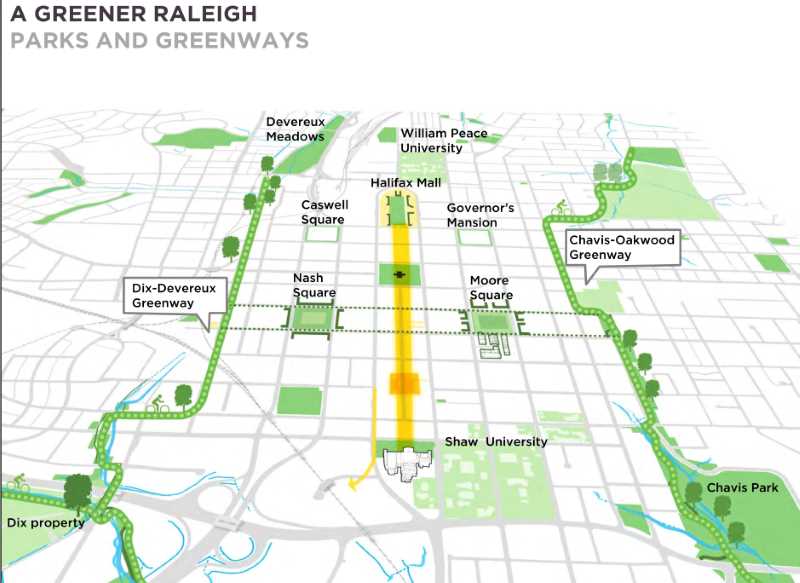 “Breathe” is the theme for creating 21st century parks, open spaces, and trails, just to name a few, that allow people to relax and enjoy the city. Focus on Nash and Moore Square as well as greenway trails through Chavis and Oakwood to the east and Devereux Meadow and Dorothea Dix to the west are proposed. 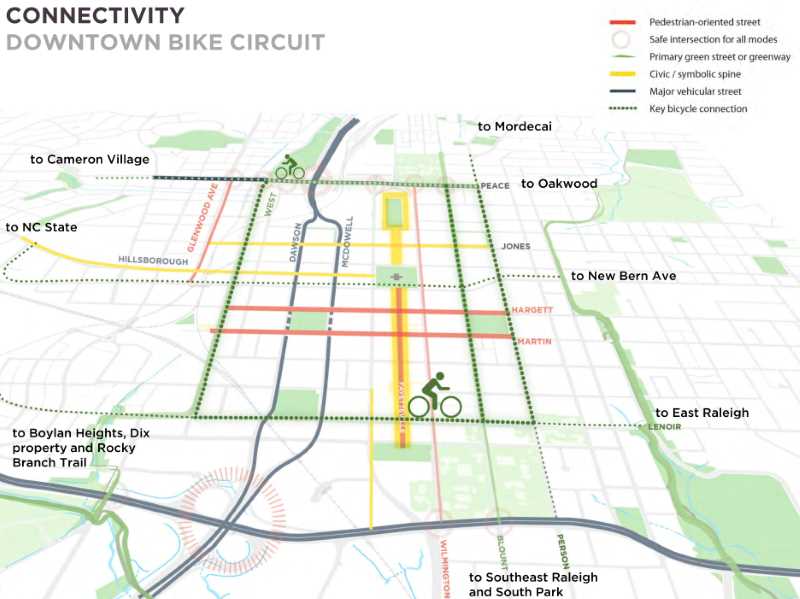 “Move” describes making over downtown Raleigh to be a model for walking, biking, and transit. Martin and Hargett Streets are identified as key pedestrian corridors and a downtown bike circuit is proposed as well.

“Stay” refers to downtown’s culture and being the tourism anchor of the city. This theme will be paired with the future growth opportunities covered below.

And finally “Link” talks about partnering with neighbors in our city. Universities, private business, non-profits, and many others also have a stake in our growing downtown. They should be at the table if not already. 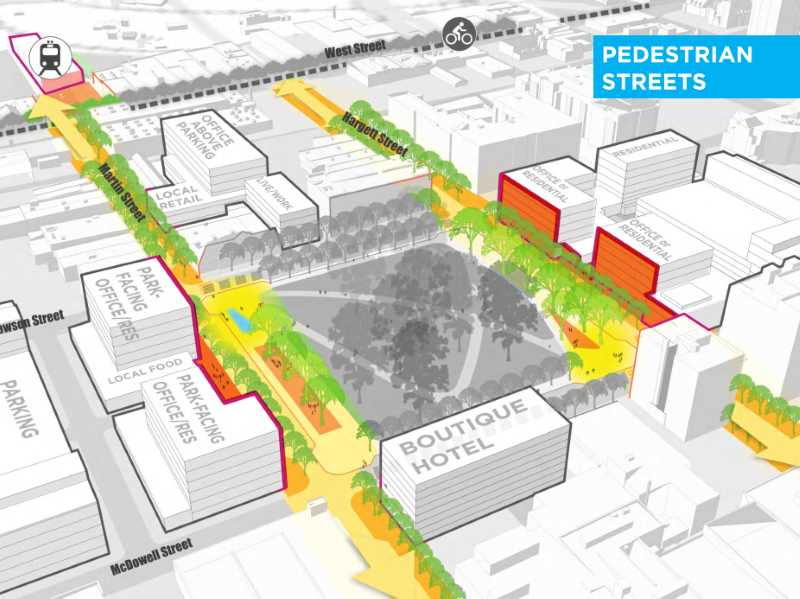 Nash-Union Square is the term for the area around Nash Square and the upcoming Raleigh Union Station. Transit-oriented development and pedestrian streets will be key to bringing new growth to this area. Ground-floor retail and improved streetscapes are tools to help make it happen.

Nash Square is seen as an urban park oasis rather than the underutilized space that it is today. Activating the edges of the square will be important especially along Martin and Hargett Streets. 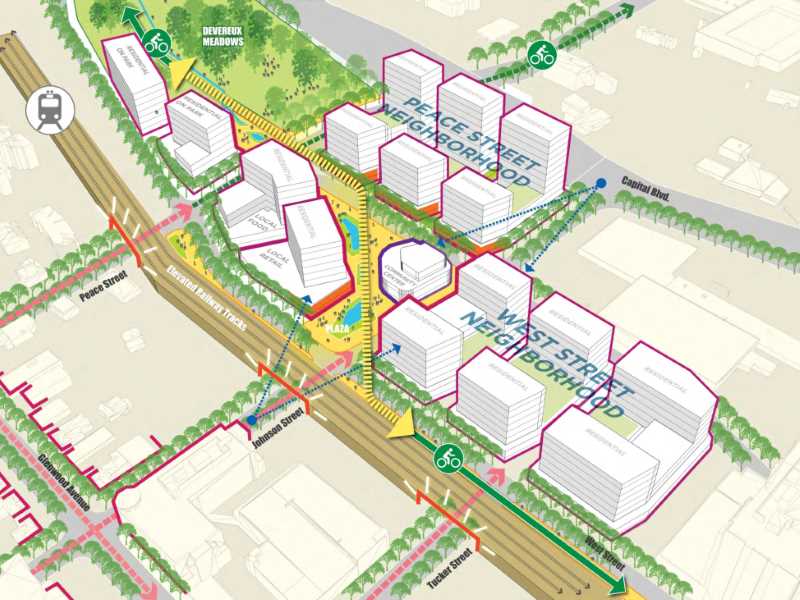 Glenwood Green is described, almost exactly, as new development for what used to be the old Smoky Hollow neighborhood before the “Urban Renewal” wave of the 1950s and 1960s cleared out this neighborhood. The area to the east of Glenwood South to Capital Boulevard could see new development around an urban greenway, parks, and urban residential buildings.

The plan suggests creating a park at Devereux Meadow as well as making new connections to the east and the south. With a possible light-rail connection nearby, this area could really be the residential epicenter of downtown. 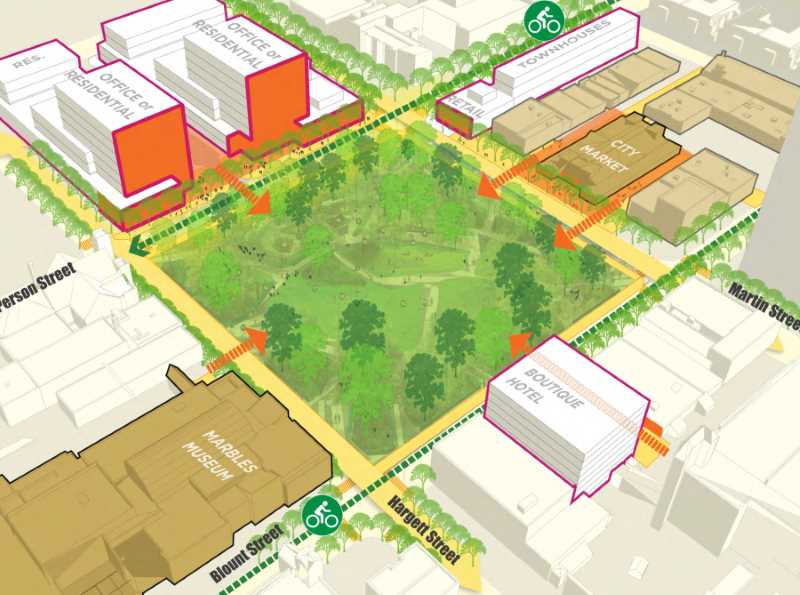 Market Square is a fusion of City Market and Moore Square. Rather than make these two landmarks individual locations, the plan suggests to create a single area that encompasses both assets.

The plan suggests to turn the area into the premier, destination-oriented market with links to the nearby neighborhoods. The plan does tell a little of what we already know and should work on. The City Market building is underutilized, implementation of the Moore Square redesign should take place, as well as the improvements to the Moore Square Transit Center. 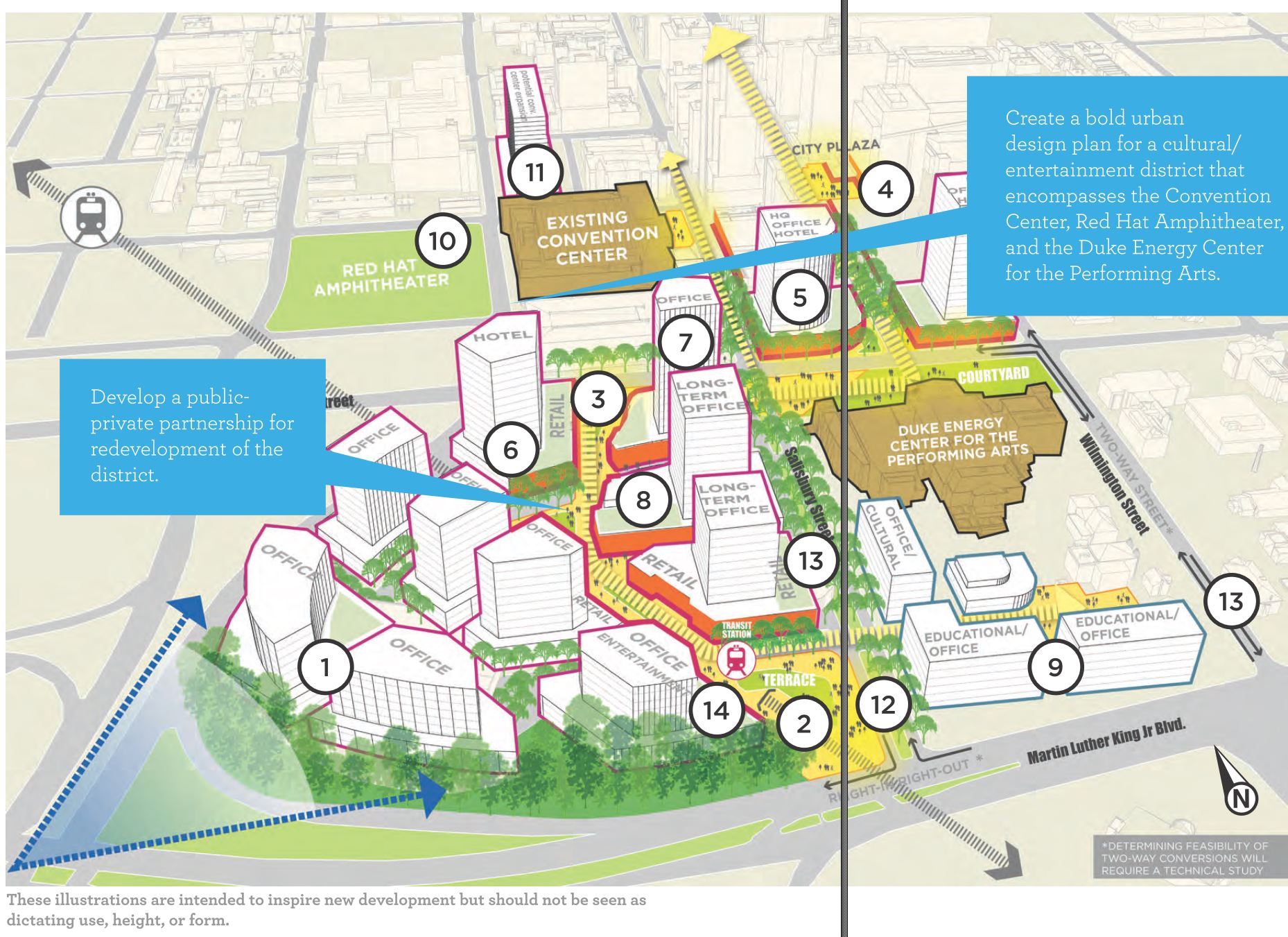 Gateway Center may be the grandest proposal in the plan. This involves the very suburban-like area to the south of the convention center adjacent to Martin Luther King Boulevard and South Saunders Street. The plan calls for pure development in this spot for a mix of uses including tourism, cultural, entertainment, and commercial.

Two big ideas are the one shown above, a campus-like setting with offices, educational institutions, and other innovation supporting entities. A second proposal in the plan shows a sporting venue wrapped with supportive retail and mixed-use development.

The plan presentation goes over the current state of the R-Line and possible changes to it that could address concerns. In the plan, we have:

It looks like the plan wants to see the R-Line as part of a whole system, that being Capital Area Transit (CAT), rather than it’s own transit service. The new route proposals are for a shorter loop resulting in higher frequency and being complimentary to CAT bus routes.