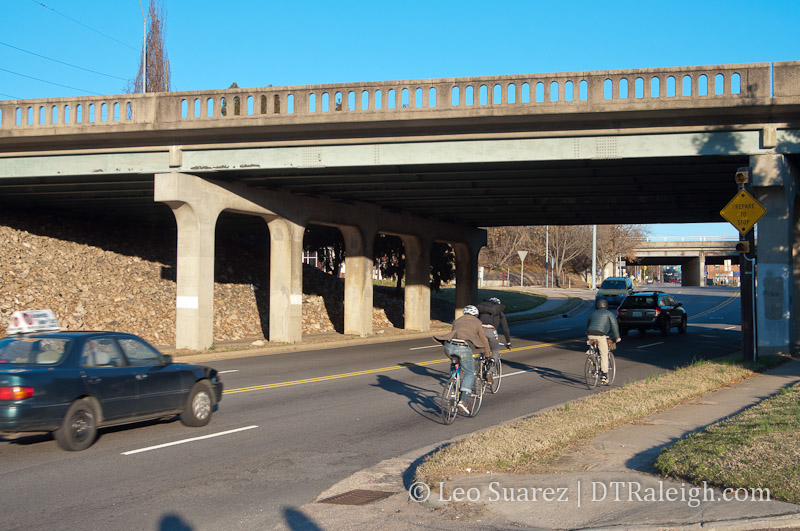 Cyclists ride under the Capital Boulevard bridge at Peace Street

Last night, NCDOT were showing off proposed design alternatives of the upcoming bridge replacements for Capital Boulevard at Peace Street and Wade Avenue. This is an upcoming project that comes out of the need to replace these approximately 50-year-old bridges before they become functionally unsafe. There are plans for two different alternatives for each bridge and I wanted to go over the bridge designs at the Capital and Peace intersection.

The two alternatives are being referred to as Alternative P-Base and Alternative P5. In my opinion, you have the status quo in the P-Base alternative and a new design in P5. However, as is to be expected the P-Base plan is the cheaper of the two. Let’s get in to each before comparing the two against each other. 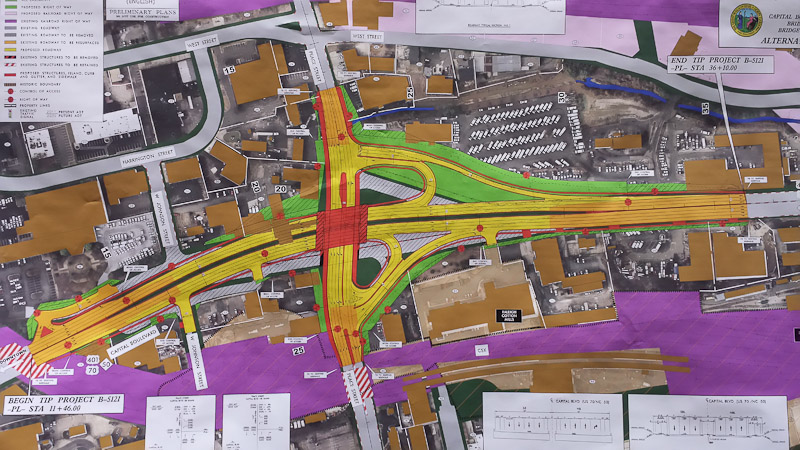 Like I stated earlier, the P-Base plan seems to have the least impact to the area and delivers a new bridge with the same street design around it. Entering and exiting Capital Boulevard from Peace Street is almost the same as today.

There are a few enhancements here that will help vehicles turn. The northbound entrance ramp to Capital from Peace would be two lanes wide, the right-most lane being a turn lane for the Cotton Mill parking lot. Also, when exiting downtown on Capital heading north, a right-most fourth lane will pop-out and feed the exit onto Peace Street. The same principals are there for exits and entrances on southbound Capital, where a fourth lane exists for merging compared to the abrupt turn lane that’s there now.

It also looks like the entrance to the small row of shops (Jersey Mike’s, Dry Clean City, etc.) will not have that little driveway onto the northbound Capital ramp. 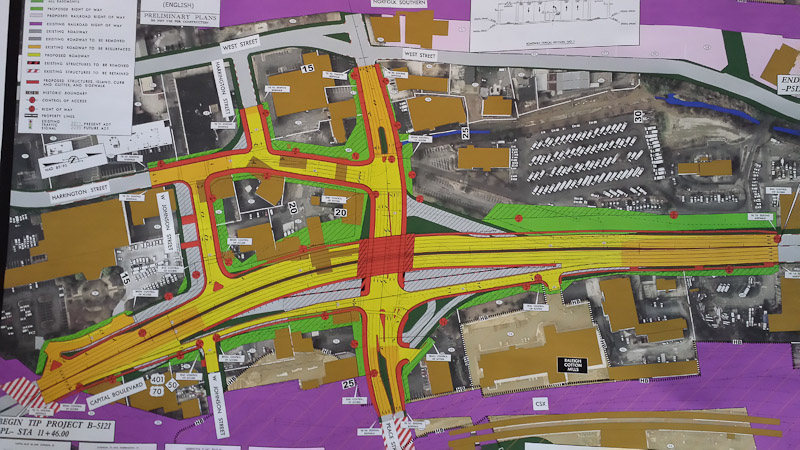 P5 has a lot more going on around the same new bridge that will be built. Capital Boulevard entrances and exits have been moved and will result in a new traffic pattern. Before we go over these, it’s important to show the new street connections that are proposed.

Harrington Street would play a much bigger role in the P5 plan. Here, Harrington would kind of “punch” through and connect to Peace Street, accomplished through the use of property acquisition. This would create a brand new, signalized intersection.

Nearby along southbound Capital, the parallel service street, intersecting Johnson Street to the north, would be redone as well. Rather than an awkward turn off Capital, you could now make a right turn, with a dedicated turn lane, onto a connecting Johnson Street. This then drops you off at Johnson and Harrington and off into Glenwood South.

Along northbound Capital, new to any proposed design yet, is a longer off-ramp with driveways to Johnson Street to the south of Peace and a turn lane to the Cotton Mill on the north. This off-ramp will create another signalized intersection at Peace Street.

So with these additions, there are some things that are removed. Gone are the “cloverleaf” style on/off ramps at Capital on to Peace. With the addition of the Johnson Street connection and Harrington Street extension, traffic should flow through here in its place.

The two plans don’t share much but walkers and cyclists get a win with both. Peace Street will get 5-foot bike lanes and what looks like wider sidewalks, which are desperately needed as nature is reclaiming the current pedestrian paths on the south side.

A minor detail that I thought was important is that both plans call for 11-foot lanes on Capital Boulevard. This actually contradicts the Capital Boulevard Corridor Study’s “Happy Motoring” section stating that 12-foot lanes were something to work towards. I believe that increasing those lane widths would have created faster speeds, more vehicles, and more traffic along Peace Street. I commented in support of the 11-foot lanes for either plan as it compliments an urban area better.

Cost of the two plans is drastically different. According to last night’s handout:

That’s an $11 million dollar difference. The bulk of the reason comes from the property acquisition involved in each alternative, 5 versus 12 properties in the area.

Overall, I left comments in support of the P5 alternative. Simply put, this area is pretty much a place to get through and not stop in. We already know that delivering the same thing will most likely produce little new results so we almost owe it ourselves to find that $11 million and try something new.

I feel the P5 alternative slows traffic down and starts to transition the area towards one with better urban form. I’m a huge fan of a grid-like street network and this alternative creates that in the new connection at Johnson Street and the Harrington Street extension. If we can add in on-street parking along these areas, interest in new development could increase. It can’t get any lower as the area only consists of sprawl-like, one-story buildings with surface parking.

NCDOT is taking input on the alternatives over the next few weeks. Here’s the project page on the NCDOT website with contact information so you can submit your thoughts.

The handout also gave us a project timeline.

[UPDATE: 11-21-13]
I’ve added the cross section of Peace Street which shows the 5-foot bike lanes on each side of the street. The cross section is pretty much the same between the two alternatives. Click for a larger view.