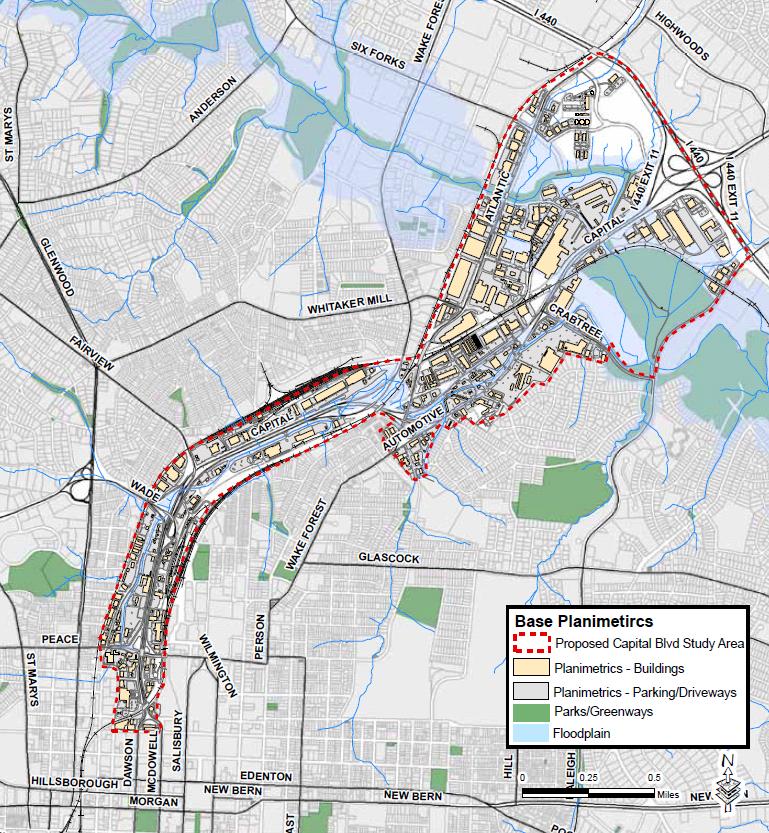 About two weeks ago, I attended a workshop at Bobby Murray Chevrolet about Capital Boulevard and what the future has in store for this road. City of Raleigh Planning Director Mitchell Silver mentioned that during the city’s Big Ideas workshop in April of 2008, more people complained about Capital Boulevard then any other area of the city. There was definitely evidence of this because the dealership was full of people and opinions on this day.

The workshop split everyone into tables and each one was assigned a facilitator. The facilitator lead the group through a discussion about the study area, shown above. With an enormous map out on the table, we talked about the what we envisioned for the corridor. A briefing book, which can be seen here, was also provided and there is some good history and statistics in there.

Capital Boulevard is important to downtown Raleigh because it is one of the major arteries that moves people in and out, from the neighborhoods and suburbs of the city. There is also a great redevelopment opportunity here to handle Raleigh’s growth and re-invigorate some blighted areas.

The comments and discussion at my table were mostly about transit options in the future Capital Boulevard. I really enjoyed talking about this topic since most of my feedback would be based on this. My idea, at a high level anyway, is to create a corridor that gives people alternatives to the typical mode of travel in Raleigh; driving a car. 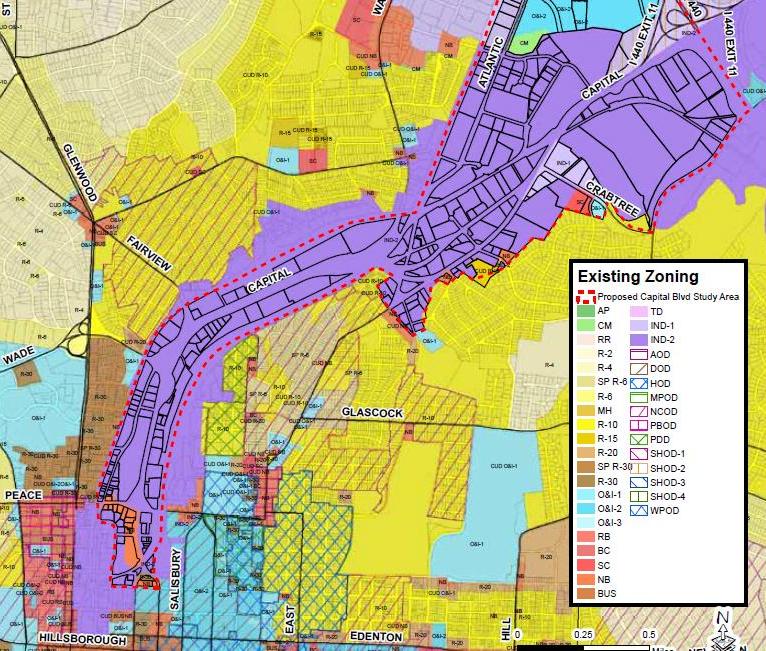 The map above shows the current zoning of the area, mostly industrial. (colored in purple) Looking at the history section of the briefing book, Capital Boulevard was planned to support Raleigh’s growth in industry along the rail lines. Here’s a quote from the N&O dated October 27th, 1955:

The project serves to create industrial sites and “should represent an added desirable feature in the development of local industries, employment and service to all citizens.”

So now that 55 years have gone by, how desirable is that area now?

Our group all agreed that Capital Boulevard was dominated by car travel and that the current bus service was a very poor experience. We also agreed that the greenway that runs through the area is an important asset to keep in future developments but was the only safe place to walk or bike. With all kinds of different transit options, I think Capital Boulevard should be redesigned to accommodate feet, rubber, and tracks.

A smarter plan for moving people up and down the corridor is to have walkable greenways, protected bikeways, and unobtrusive roads for cars and rail. It will take some finesse to lay out all these modes of travel efficiently but if done correctly, it could really help the future of Raleigh and perhaps provide an example for other developments to go by.

There are many ways to get around any city and I believe that if all modes are treated equally, people will use them all. If Capital Boulevard could provide us with a way to walk, bike, ride, and drive then it will give us all a choice in how we want to move ourselves through a part of Raleigh. Having that alternative mode of transit, yes walking is transit too, is so important for a city that is trying to grow up.

If you have any comments about the study area, please let the Project Manager, Trisha Hasch, know about them. The planning stages are going on right now so let them know what you think. Send an e-mail to trisha.hasch@raleighnc.gov