Photo taken on April 14, 2013 at the corner of Lenoir and Wilmington Streets.

A few days have gone by so I think it’s a good time to look back over the evolution of Charter Square now that the confidence level is higher and we may actually get a building on this site.

As far back as 2006, the city labeled this piece of downtown as ‘Site One.’ On top of site One was the former Raleigh Civic Center which previously bookended Fayetteville Street. But with the revitalization of downtown underway, the roof of the civic center was blown up, literally, and the site demolished to make way for the current Fayetteville Street, Site One, and the now open Marriott Hotel. 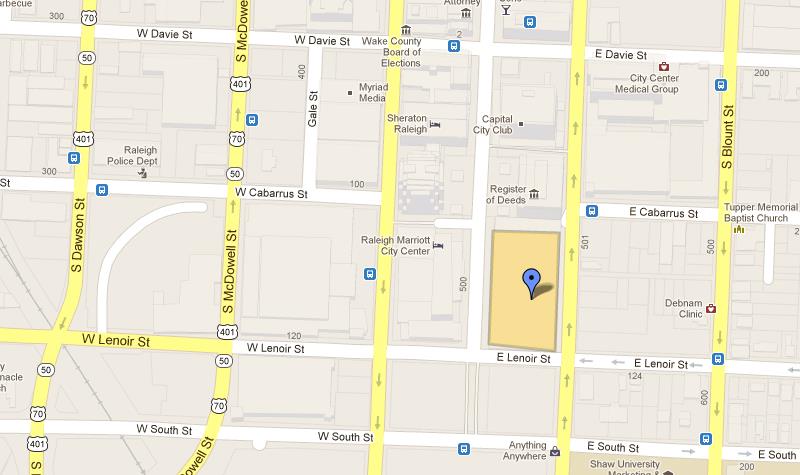 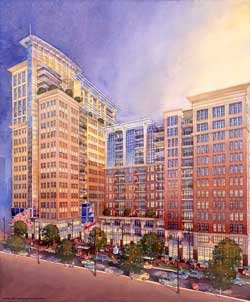 The first round of renderings, that I could find back in the photo vault, is the one above. Two towers were planned at Site One, an office tower on the north half and a residential tower on the southern half. With ground floor retail space, the project was mixed-use all the way.

The plan was to start building the towers after the city completed the underground parking deck that would support the Marriott Hotel and the new Raleigh Convention Center. 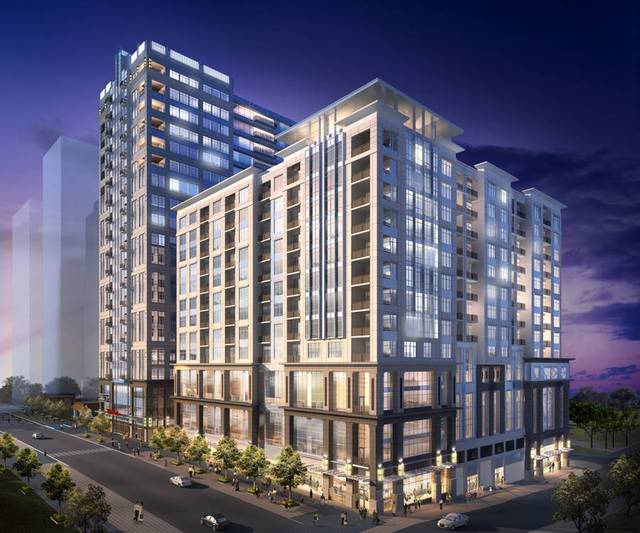 Things went quiet for a little while and in 2007, new designs popped up. The same two tower project was planned as well as a larger ad campaign to start leasing the spaces. The north tower came in at 358 feet over 20 floors and the south tower at 182 feet over 15 floors. Other towers were on the planning board for downtown Raleigh in 2007 and things seemed positive.

What was most likely due to the economic recession in 2009, Charter Square then stalled.

The underground parking deck was finished and the Charter Square block has been wrapped in a chain-link fence with advertising for almost four years now.

Last week, there was an announcement by Dominion Realty Partners and Charter Square that they were bringing a building to the site. The south half of Charter Square would consist of an 11 story, 225,000 square foot building with class A office space. The glass covered building will seek a platinum LEED certification and cost around $50 million.

According to the press release, 35,000 square feet has already been signed with a ground floor restaurant by Eschelon Hospitality, the good folks behind Sono, Zinda, and The Oxford. The press release also says, “Construction is scheduled to begin in Fall 2013 and be delivered in Fall 2014.”

Skyline fans first nit-picked the height of this tower last week but astute readers noticed that this tower is actually taller than the one previously planned for the southern site. The 11 story office tower will be 215 feet tall compared to the previous 15 story, 182 foot residential tower. Yes, office floors are taller than residential floors in most cases.

On May 2, the developers will submit their site plans to the city for approval. Here’s to smooth sailing until groundbreaking! 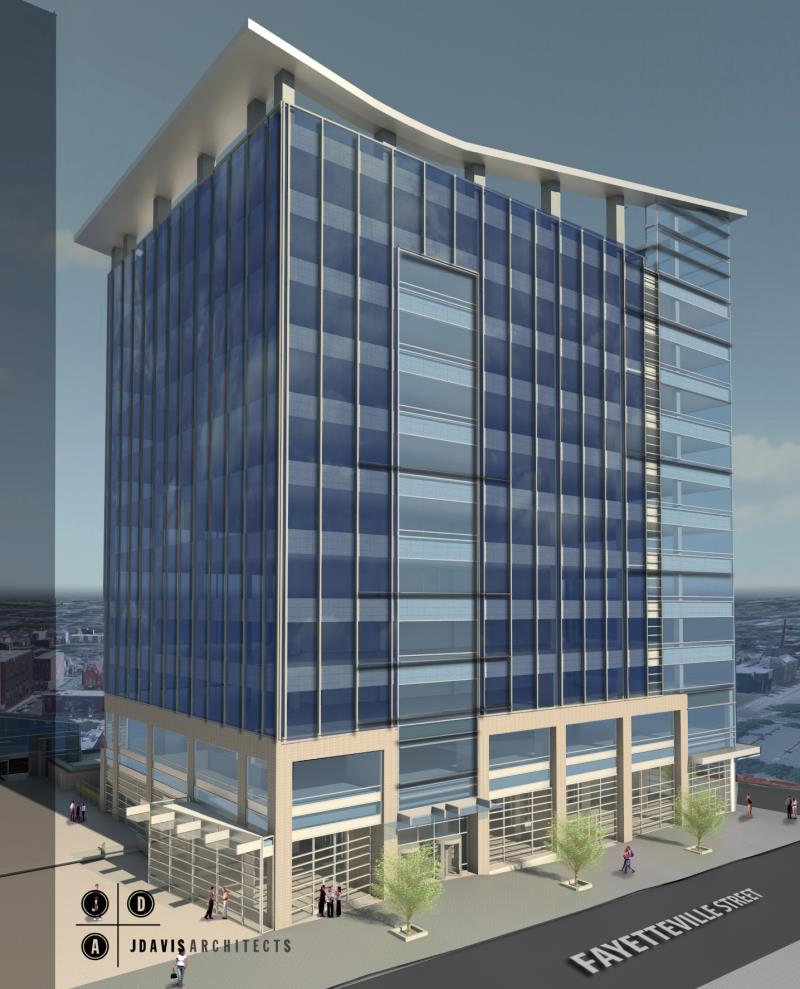 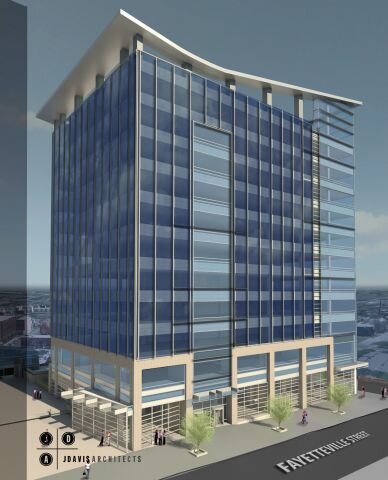 There’s some high-level info at the N&O and the TBJ but I’m sure more details will come out soon if, according to the TBJ, the groundbreaking is in the next few months.

I’m sure as most of you know, the era of little credit is upon us and recently it has affected the start of construction at Charter Square. The Raleigh City Council has given the developers an extension and ideas are being thrown around for temporary uses for the area on top of the concrete foundation. From the linked article in the N&O, some ideas are for an ice rink or for artificial turf to be laid across the concrete. Temporary use of the area while we wait for the economy to strengthen is a great idea because we have the flexibility to try new things. If they work, it can be moved to something more permanent. If not, it will result in only a small loss and good proof that the idea does not work in downtown. Here are some other inexpensive ideas that could be worth looking into while we have a fluid space before the towers are built.

A public stage could be set up for use by anyone. Think of a common area in a mall, there is always something on display or special event going on, in and around the elevated area. Groups could use it to gather around for outdoor presentations or to entertain Fayetteville Street pedestrians.

Like the outdoor art that is coming to City Plaza, the space could be used for outdoor art or could be an extension to what is on display nearby.

Set up some benches, a couple power stations, dedicated wifi, and we’ll have a hive of internet surfers relaxing outside. This is similar to what Toyota recently did as part of their Prius marketing campaign. Solar collectors were installed with benches and wifi to provide you power for your laptop and cell phone as you access the net outside.

If the artificial turf is laid out, we could go one step further. Paint some lines, set up two goals, and a mini field is born for pickup games of soccer or football.

The space could also be rented to the convention center. The crew running it could manage the land and use it for outdoor setups if clients prefer an outdoor, sidewalk atmosphere to being indoors.


City officials are also trying to figure out what to do in the near-term with the slab of concrete directly south of the Bank of America building. That is the future site of Charter Square, a two-tower project that has been delayed by the credit crunch…………..

Diaz wants to turn a portion of the Charter Square site into an ice rink for two months this winter. He’s hoping to find corporate sponsorship to cover two-thirds of the cost, a tough task in this economic climate. 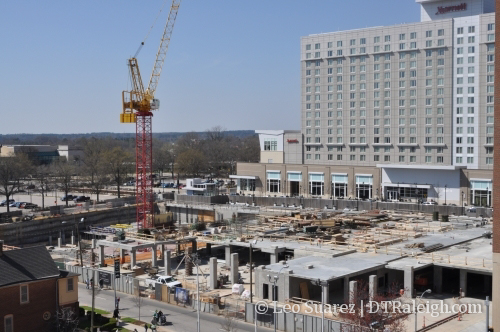 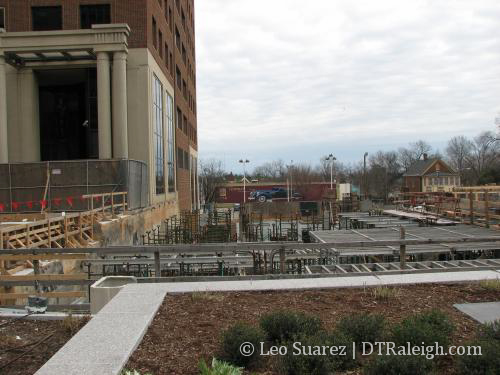 On Fayetteville St., two cranes loom out of a giant hole in the ground. Construction on the underground deck continues and is beginning to rise up to the street. Concrete has now met up with Wilmington and Fayetteville Streets, which are actually at different elevations on this block. Fayetteville St. is higher then Wilmington. See the side view picture below to get a better idea of it. The south parking deck does not have as much progress as the north so we’ll have to wait and see if Charter Square or more parking deck comes next. 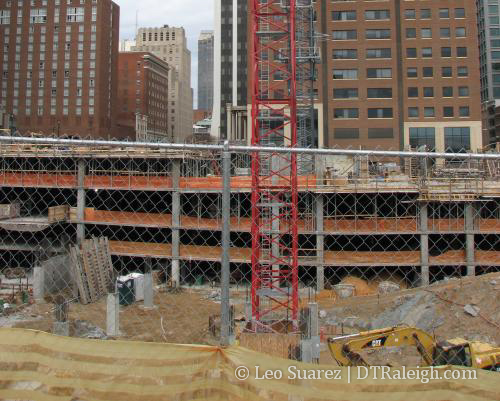 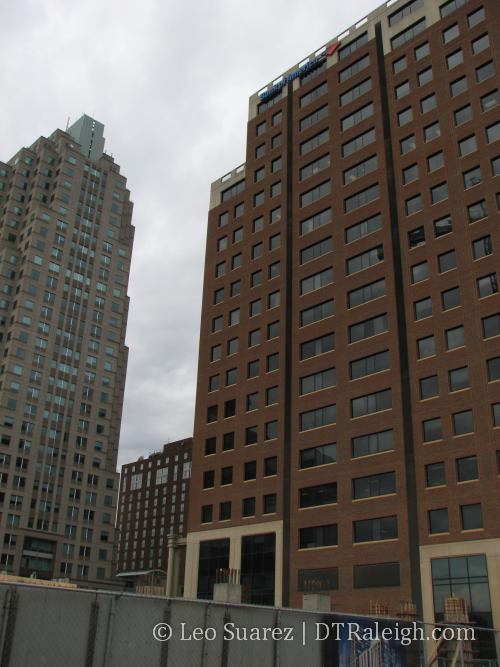 Heads up Bank of America, that sign will be blocked soon. 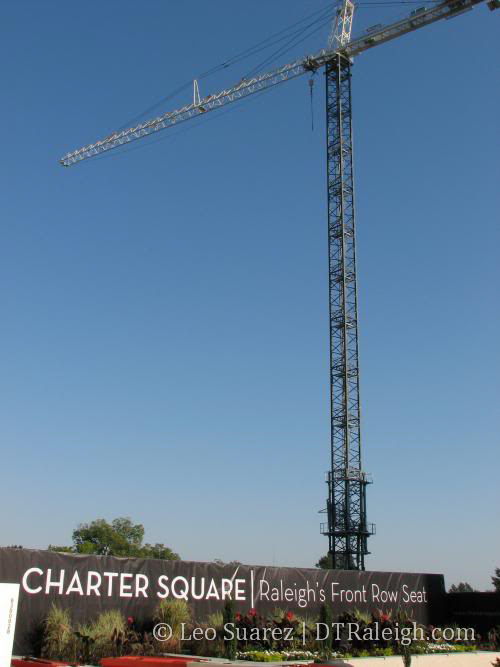 Charter Square will consist of two towers located on the southern end of Fayetteville St. across from the new Marriott Hotel. You can thank Craig Davis Properties for these beauties as they will have, from their website [Update: Broken link]:

…two towers, constructed of natural stone and glass. Building One will consist of approximately 405,000 square feet of office, retail and residential space on 21 floors. Building Two will consist of 30,000 square feet of retail space with 120 residential units above the retail. The buildings will sit atop a 690 space underground, city operated parking deck and approximately 600 spaces will be reserved for the building’s office tenants. The towers will be adjacent to Raleigh’s new convention center, as well as numerous restaurants, retail and cultural venues.

The underground parking deck is currently under construction so until then we can enjoy these renderings of Raleigh’s front row. 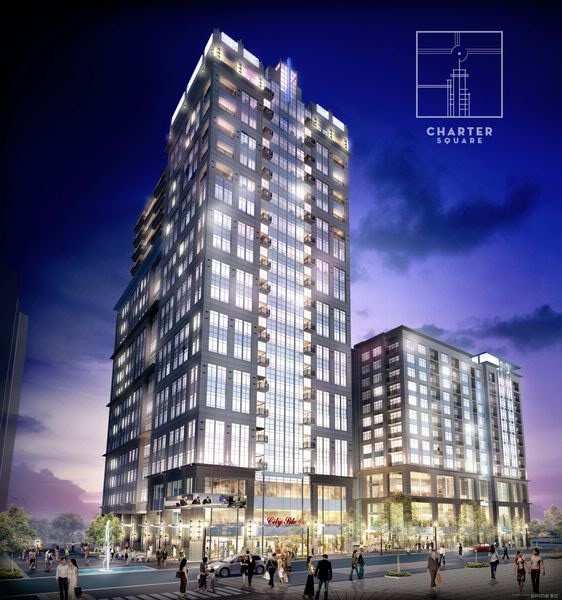 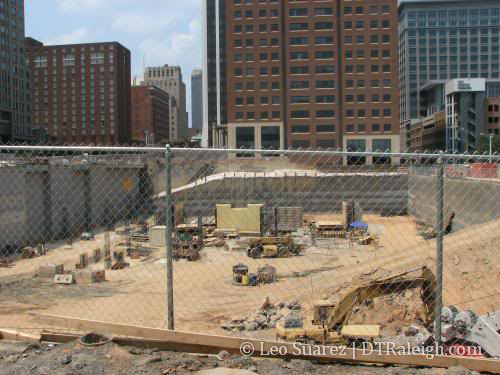 Construction starts on the parking deck that will be under the future Charter Square.