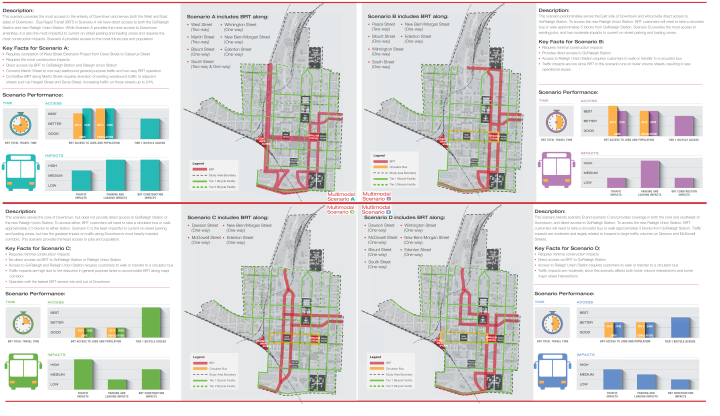 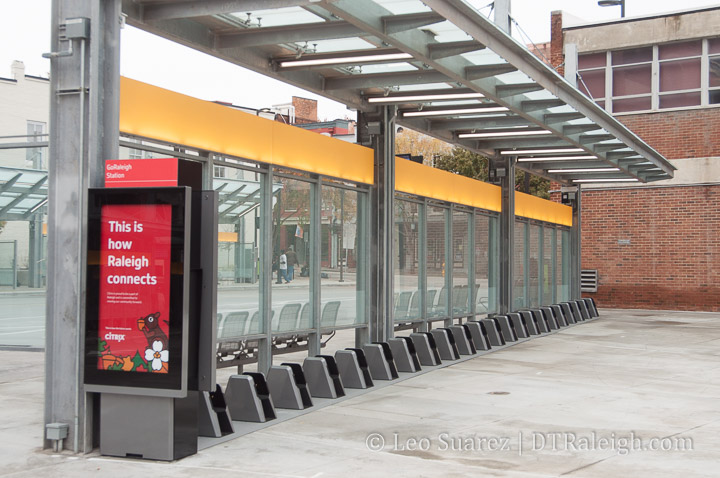 The first Raleigh bikeshare system, Citrix Cycle, is rolling out with stations being installed in multiple locations. Above, the station for GoRaleigh Station across from Moore Square is in place, minus the bicycles of course. The last update I heard is that the system should be available for use before the end of the year.

See more about the system including the full map of stations over at Citrix Cycle. 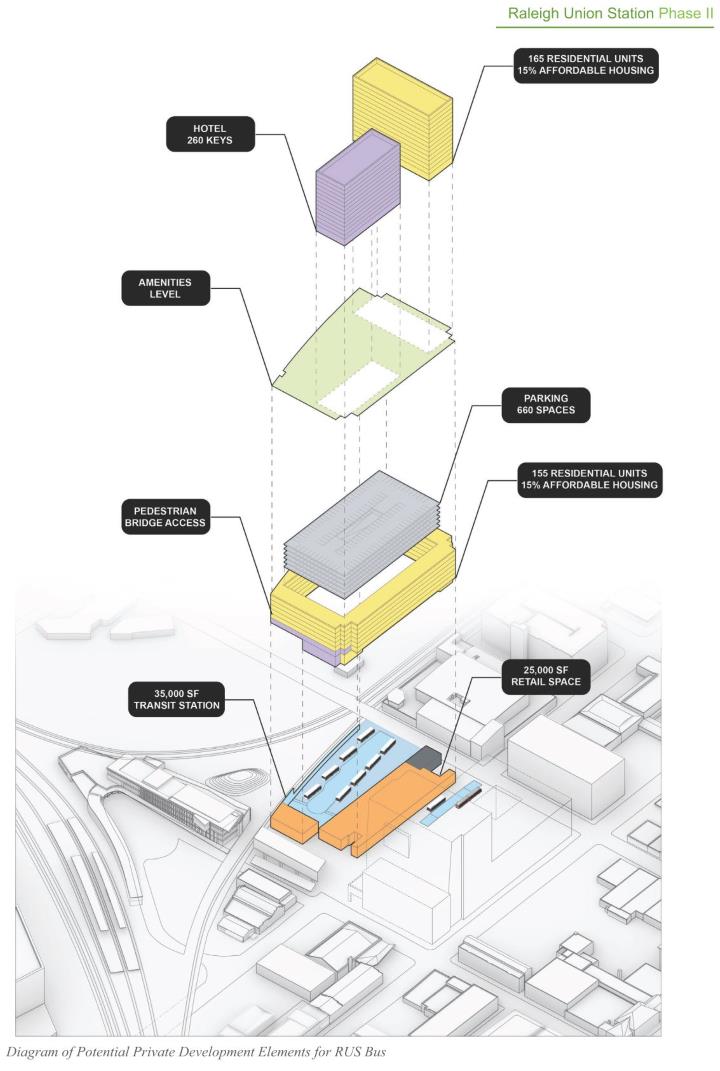 More of a rendering or cross-section this week. As I was looking through the RUSbus grant application, I noticed this diagram of how the mixed-use project could look like. Now this isn’t set in stone by any means but I take it as what the planners have in mind including market-rate and affordable housing, hotel, office, and retail space. Being a transit hub as well, this may be the most mixed-use project in downtown Raleigh. 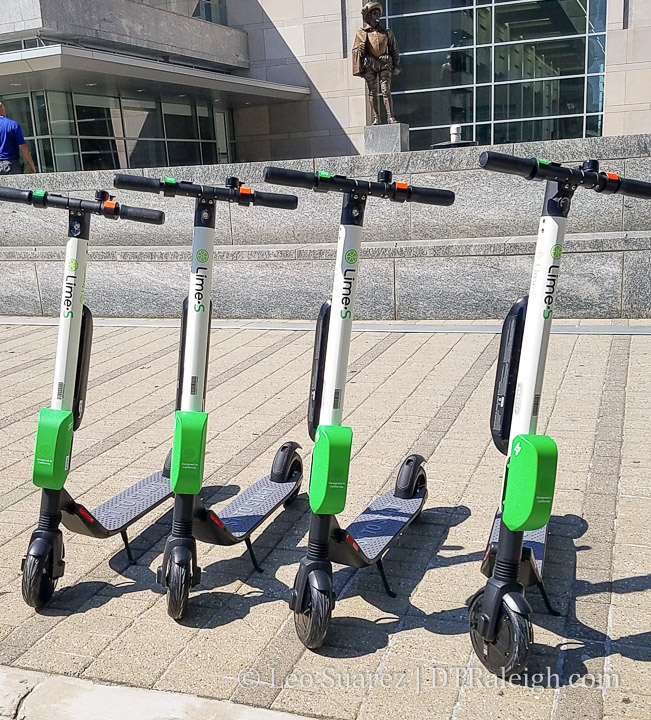 A second dockless scooter company is now operating in Raleigh. Lime has brought their electric scooters to the area and just like Bird have them concentrated in the downtown area.

Lime technically gets the award for the first dockless provider in Raleigh with the launch of their bikes around the NC State area. You might occasionally see them downtown but not reliably from my experience. That’s kind of by design since they were launched in a partnership with the university and not the city.

This makes two scooter companies operating in the area which expands the overall number of vehicles, providing more choice to the end user. As of this writing, the city is drafting dockless scooter regulations so the drama over this new form of transportation may not be over. 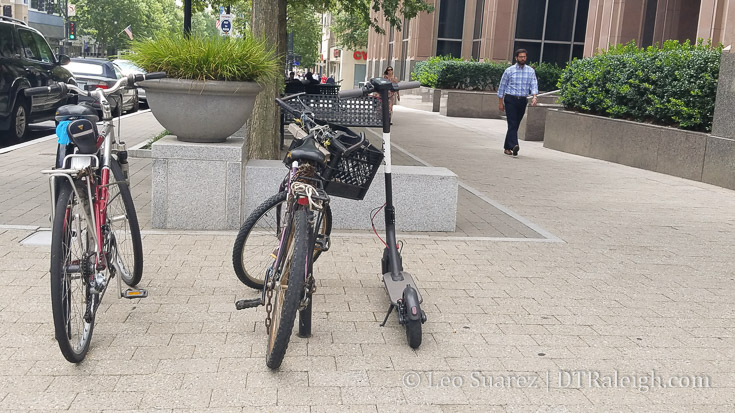 Ever since the electric scooter company, Bird, deployed in Raleigh everyone seems to have an opinion on this new form of personal mobility. Raleighites seem to be all over the spectrum but a recent survey run by the Raleigh DLA shows strong evidence that a majority of downtown residents and workers support e-scooters in downtown Raleigh but with some type of new regulation.

You can dive into those results here.

Mobility within Raleigh’s downtown has seen so much change since this whole revitalization thing started. I wonder if we’re getting closer to getting it right or still struggling with it.

Downtown Raleigh is too small to drive from one place to another yet big enough that walking from district to district feels far. (at least for most people I think) This presents a great opportunity for short-trip mobility services such as bikeshare, electric scooters, rickshaws, rideshare, and the R-Line circulator.

Personally, I love the plethora of options to move around. If I need to get from Seaboard Station to the southern end of Fayetteville Street, I could easily walk if it’s a nice day and I have the time, ride the R-Line for free and get there a little faster, ride a scooter for cheap and get there even faster, or request a ride in a car and be there quickly.

My impression of Raleigh right now is that no one is against having options. What the DLA survey suggests is that problems are arising when these options are conflicting with each other. It seems we have a city built for two speeds with a third speed emerging as a popular option and this new speed is struggling to find it’s space.

A combination of education and safer streets are probably the cure for this rising middle speed. Also, a part of me thinks that over time users will become used to using scooters that they’ll be more confident on the streets. (I’ve seen some very nervous looking scooter riders out there!)

The quick adoption of scooters in downtown Raleigh is what bicycle advocates have been waiting for. It’s brought the conversation for safer streets for middle speed users front and center. How our city responds will be telling as trends point to more and more of this coming.

The day of the bike lane is over. It needs a new name.

There’s lot of chatter about dockless scooter in Raleigh on the DTRaleigh Community. 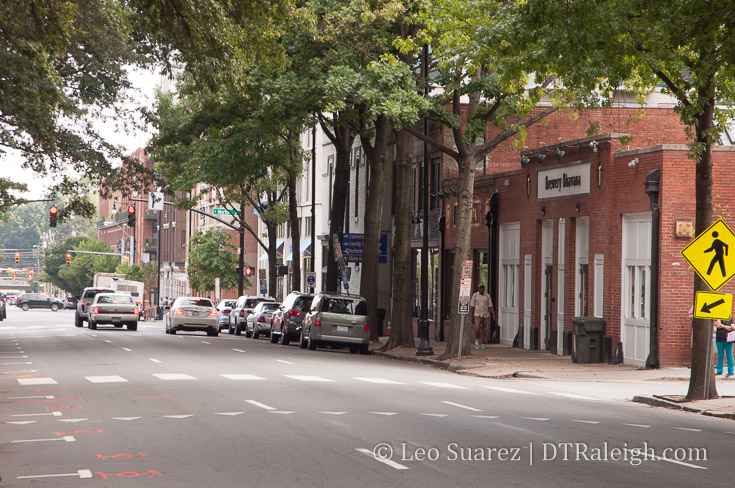 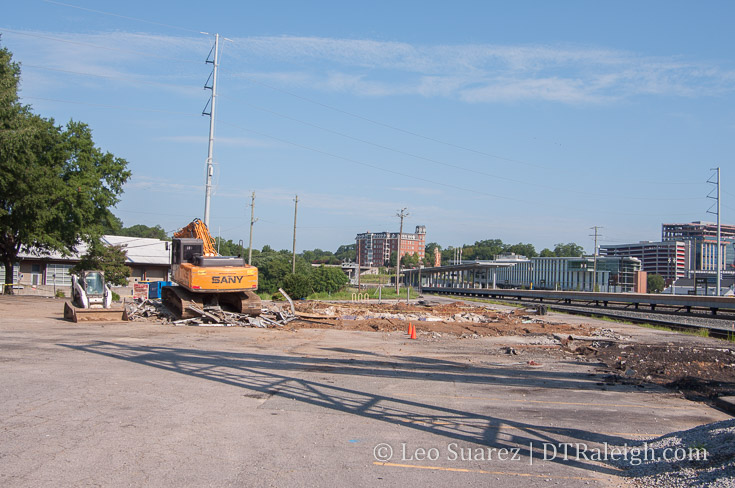 All the attention, rightfully so, is going towards our new Union Station. That has left the former station on Cabarrus empty for only a short while. It has now been demolished and cleared away.

Some pieces, including the benches and some of the wood canopy, were saved. Now the lot sits empty waiting the next development to make way. You can revisit the former station here in this photo gallery I posted in January of 2018.