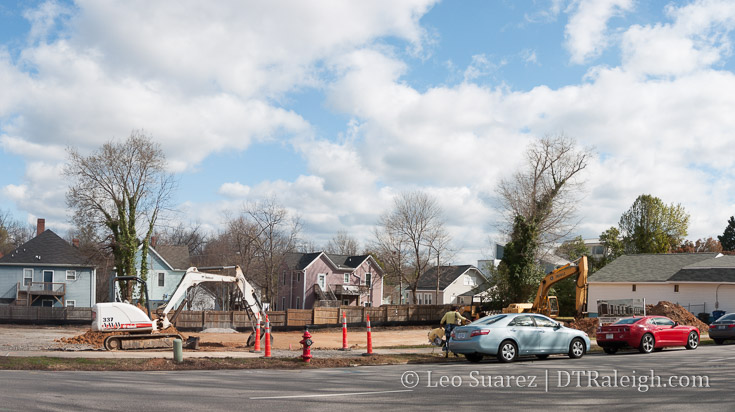 Just outside of downtown is an interesting project that I’ve been following. It delves into the affordable housing discussion a bit as well as showing our council’s interest in the topic.

To be clear, and try to keep things consistent, I like to separate two types of housing with regards to affordability. The first is affordable housing, that being government-subsidized housing. The second being housing that is affordable. This one consists of housing that is relatively lower than comparable supply nearby. The latter is mainly what this post is about.

Raleigh should be striving for housing prices that offer choices to all levels of the socioeconomic scale.

New Townhomes are Being Built Today

With that said, today, land is being cleared to make way for a new set of townhomes along the 500 block of New Bern Avenue. This is right across the street from the New Bern entrance to City Cemetery. Previously, the land contained zero buildings and some of it was surface parking.

The project is called 10 Arros and offers luxury, high-end units with prices starting around $485K. There will be ten, three-story units evenly divided across two buildings.

If you’re a regular reader, townhomes like this aren’t anything new, right? This project has a longer history though and it’s worth posting here in full as a bullet point in Raleigh’s “housing that is affordable” conversation.

Rolling back to 2016, plans to combine a few parcels together along New Bern Avenue were submitted to the city to build two-story townhomes. The plan was for a total of 10 units divided evenly between two buildings. A parking lot would be built behind the units who would have front doors facing the sidewalk.

Here is the location of the project then; it is the same location now. 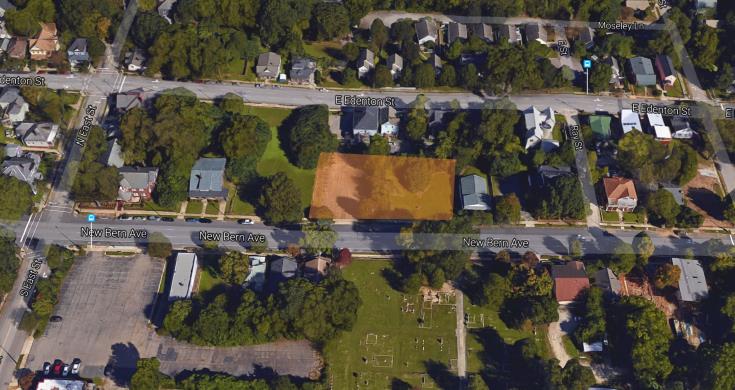 The developer, Stuart Cullinan with Five Horizons Development, wanted to target starting families with these townhomes. During a South Central CAC meeting that I attended, he reported that the townhomes would cost in the low $300k range. I have emailed with Cullinan about the project a few times in 2016.

While $300k-$350k is not a price point that exists for minimum wage workers, it does go against the trend of new single-family homes being built in this same area. New construction homes in East Raleigh in 2016 were being priced throughout the $400K-$500k range. A few were lower, and a few higher but that has been my experience as a resident in this area. 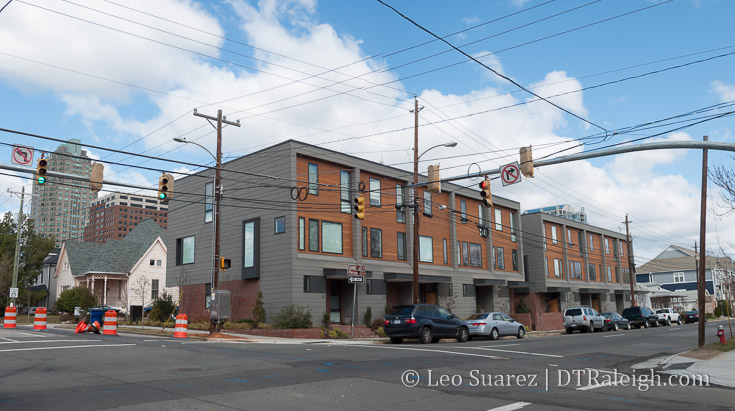 In my opinion, I consider Cullinan’s proposal as affordable. This is very similar to the townhome project on Person Street called The Ten, which we’ve covered here on the blog.

The Ten had units priced around $300k. Naturally, they were bought up very fast.

Welcome to the NCOD

Going back to Cullinan’s project on New Bern, there’s a small catch with the location of the property that limits what his company can do. It is located in the New Bern-Edenton Neighborhood Conservation Overlay District (NCOD for short) and the type of townhomes proposed are not allowed.

You can dive more into NCODs here on the city’s website. The New Bern-Edenton NCOD was formed in 1992, a result of a revitalization plan for the area that was worked the previous year. Basically, the intent was to encourage home ownership rather than a high rate of rentals and boarding houses, a big concern at that time..

Here’s where it starts to get tricky and if any readers in real estate are out there, I’m opening up this post to you to explain this in greater detail, with credit. 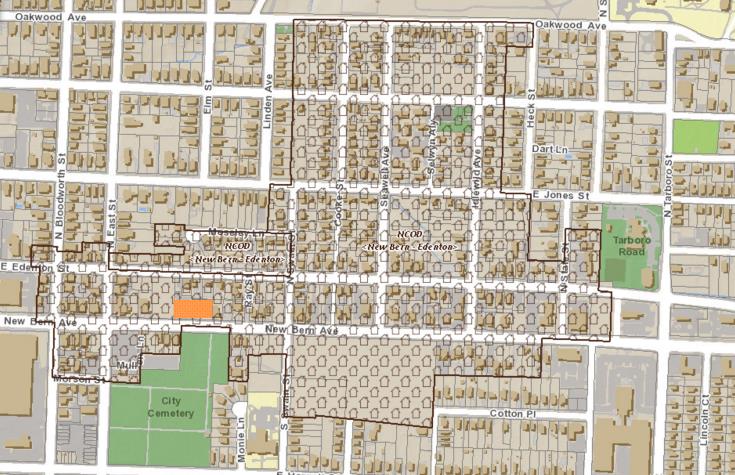 The NCOD’s regulations, particularly minimum lot size, 4,000 sq. ft., and minimum lot frontage, 30 feet, basically make it impossible for a fee simple townhome ownership structure to exist. Only condominium ownership can exist under those regulations. A report from the city (source #1) explains it further:

It is important to note that a building form that looks like a typical townhouse could be built today under the NCOD regulations. The key difference is the ownership structure; to meet the minimum lot size of 4,000 square feet and minimum lot frontage of 30 feet, the townhouses would be required to have a condominium ownership structure instead of fee simple ownership. Fee simple means that the property owner would have absolute ownership over both the building and the land underneath i.e., each townhouse would be on its own lot. Condominium ownership means that the property owner holds title only to the air space or building itself, not the land underneath.

The report goes on to say that the built character of the neighborhood today is very consistent with the regulations of the NCOD. No townhomes exist within this NCOD however they are not disallowed. It’s that ownership model that presents a bit of a problem.

Mr. Cullinan, who is also a resident within the NCOD, requested a text change to better align with fee simple townhome ownership. Presented as a compromise, the proposal would affect a subsection of the NCOD, mainly along New Bern Avenue and Edenton Street. 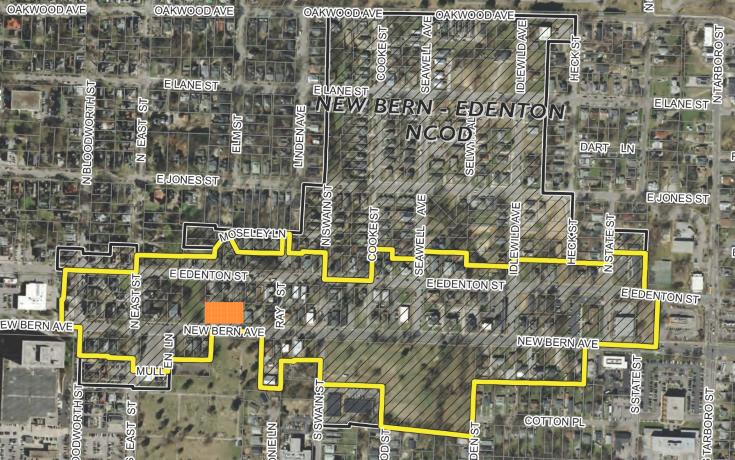 To the best of my knowledge, a fee simple ownership model allows for cheaper units. Compared to a condominium model, fee simple allows for less overhead and a different financing scheme, which keeps cost down. (Here’s where I’m looking for elaboration from our real estate readers.)

Now comes the fun part. Getting this approved.

The For, The Against, and the Council

We have a few players here in the NCOD including:

The Sept 6, 2016 council video is one to watch for yourself as Cullinan, well Cullinan’s lawyer, makes the case for the text change, along with dozens of residents in and near the NCOD who came out in support of it.

At the same time, those previously mentioned were there against the text change. If the video doesn’t show for you, watch it here on YouTube.

I know it’s almost an hour long but I consider this an important watch for any civic geeks who are reading. We have long established community leaders and historic preservationists up against a new Raleigh citizen that’s looking for something different. Here’s my rundown, with highlights, of the video for those in a hurry.

After that hearing, the council took it up for discussion.

To summarize, the council was squeamish on this one and seemed to have a problem with the way a change to an NCOD is taking place. They even had to ask if Cullinan followed the city’s process to apply for this change. It was followed correctly and the council recognized they had issue with that process itself.

Councilor Stephenson showed his concern over this text change and recommended an individual rezoning that was supported by only the immediate neighbors rather than a broad change affecting more than 100 properties. A conditional-use rezoning on the property itself would be better, in his opinion, rather than a large area change.

When Councilor Cox asked a question to staff about how a different NCOD came to be, among other info, it was stated that 51% of the property owners had to approve a rezoning for the NCOD to take affect.

The council then seemed to get hung up on the 51% figure. Councilor Baldwin proposed deferring the entire case so that Cullinan can get 51% show of support, from within the NCOD, before approving the text change.

The rest of the council didn’t buy it and instead denied it in a 5-3 vote. The motion was to deny the text change so the breakdown was:

We feel the right decision was made. Some of the reasons cited included: the change being initiated by a developer and not residents, parsing out a subsection of the NCOD for the change, pursuing a change for the entire NCOD as opposed to a specific parcel, and the precedent of chipping away at long established NCODs. Additionally, we are pleased because by not changing the lot width from 30ft to 16ft, we avoid the potential risk of tear downs of historic properties not protected by historic district designation.

Fast forward to today and modern townhomes with a higher price tag are being built on the property along New Bern.

Why do I feel like we missed something here?

It’s as if government-subsided, below market rate housing is acceptable as well as high-priced new construction that “maintains character” but nothing in between.

The change was to allow a different ownership model, not building type. Instead of fee simple townhomes, we now have condominium townhomes. I don’t know the intricacies of the differences but by fighting against this change, you’re supporting a higher priced product in today’s market.

I don’t have the experience or training to be able to think what the change might have caused. There may have been unintended consequences if the text change took place. We may never know unless we try.

However, we now have a real-world example of our city shooting down private sector attempts to fill the “missing middle” housing in Raleigh.

As a side note, this isn’t Cullinan’s first attempt. You should look into his other project, 1335 Courtland, which was shot down by the Mordecai neighborhood. Read more about that on the Raleigh Public Record.

At the end of the day though, the 10 Arros project is the path of least resistance. I place no blame on the developer. I applaud him for all the work he’s done to present this issue and make some noise about it.

To just work within the limitations of regulations presented to you seems easy. To go against it means you have to herd cats and that is awfully time-consuming.

Putting politics to the side, the impact of ten units priced near half-a-million dollars may not seem like much but as more continue to pop up onesie-twosie, downtown loses more of its mixed-income character and limits access to those that can’t afford it.

Is that the downtown we’ve planned for?