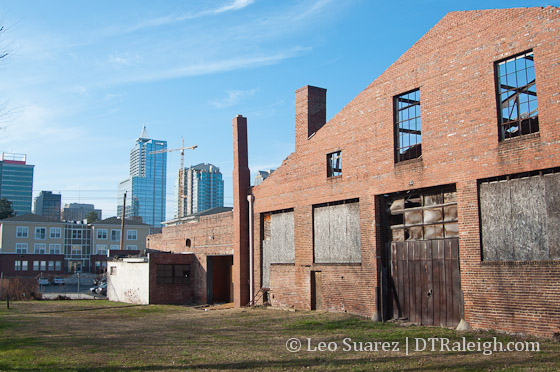 Just outside of downtown Raleigh is a site that’s getting a lot of attention lately. The block containing what is called Stone’s Warehouse at 500 East Davie Street could see a major renovation and new development in the near future.

This city-owned property could be sold soon and transformed into a destination for a mix of uses. I wanted to introduce this project as well as dive into the current topic of affordable housing, a criteria the city has listed for potential developers of the site to comply with.

Stone’s Warehouse
An old bus repair shop, the warehouse has been around since about the mid-1920s. The Carolina Coach Garage and Shop outgrew the space and moved out in 1939. After a variety of uses, it was eventually acquired by the city in 2001 and has been empty since.

In addition to the empty warehouse, the site also includes the currently open Rex Senior Health Center. The parking lot and some open land rounds out the rest of the site.

The city has slowly acquired the majority of the block, not including a few houses on the southern end. They intend to use it for community development and have put the site up for sale to developers. A long list of criteria has been put together and today we have three developers in the running for the sale of the site based on their proposals.

According to an article in the N&O, here are some of the details of each plan:

As of this writing, Raleigh city staff and the Budget and Economic Development (BED) Committee recommend that the proposal by Transfer Company LLC be selected for the site.

For more reading see these articles:

Affordable Housing and the Scattered Site Policy
The most controversial and discussed topic with Stone’s Warehouse, and sometimes with downtown Raleigh in general, seems to be the affordable housing topic. Take note that the BED committee recommended a plan that does not include affordable housing.

I think we first have to recognize that the term “affordable housing” means different things to various people. The first place I looked for a definition is our city’s adopted 2030 Comprehensive Plan which explains it nicely.

The terms “affordable housing” and “workforce housing” mean different things to different people, and a variety of definitions have been advanced by various groups. For the purposes of this plan, housing is “affordable” if the cost of occupying it does not consume more than 30 percent of household income—the definition promulgated by the U.S. Department of Housing and Urban Development (HUD). HUD defines housing costs as contract rent plus utilities for renters, and monthly payment (mortgage plus taxes and insurance) for owners. Affordable housing refers to housing affordable to households with incomes at or below 80 percent of the HUD-estimated Area Median Income (AMI) for owners, and 60 percent for renters. Workforce housing is generally thought of as housing affordable to essential public- and service-sector employees such as teachers, fire fighters and nurses. It is defined here as housing affordable to households with incomes up to 120 percent of AMI. As of February 2012, the HUD-determined AMI for a family of four in Raleigh is $79,900.

I hear a lot of commenters on this blog, people around town, in the media, all over say that affordable housing is important. But which one do they actually mean? We have:

Both may or may not be related. The housing section of the 2030 Comprehensive Plan has a lot more on this and should be your next stop for more information.

As recently as early 2014, the policy was under review. The Raleigh Public Record has a write up, including a map, about the conversations that took place.

Areas of the city are broken up into four priorities: Priority One being areas are those that lack affordable housing; Priority Four areas have heavy concentrations of low-income and minority residents.

The Scattered Site Policy is mentioned several times in the 2030 Comprehensive Plan. Updates to it should certainly be looked at but following it is a strong recommendation of the plan.

How is Raleigh Doing?
We have some figures here in order to make some generalizations. Using the 2012 data point of $79,900 AMI for a Raleigh family of four, we have:

I see this as kind of a range here in order to give us some context with the definition of what is and isn’t affordable. At the same time though, more detail is probably needed to account for taxes and of course everyone’s situation is different. 30% of the $79,900 figure is $23,970, or $1997.50 a month. Is the message that a $1900 a month mortgage payment is affordable to a family of four pulling in $79,900? More details are definitely needed. (for a follow up post perhaps)

When it comes to the locations of affordable housing in Raleigh, there is some data available showing the mapped locations. I’ve had a list of sites in Raleigh which include Raleigh Housing Authority developments, HUD subsidized projects, and NC Housing Finance Agency projects. I went ahead and mapped them which you can see below.

NOTE: Data is dated December 2013. City-owned rentals are not included in this map. Some projects may also be paid off and are no longer considered affordable.

Another map to show is this one below, showing subsidized affordable rentals on top of the scattered site policy. This map is dated December 2013 and shows the entire city. For finer viewing, I recommend downloading the pdf. 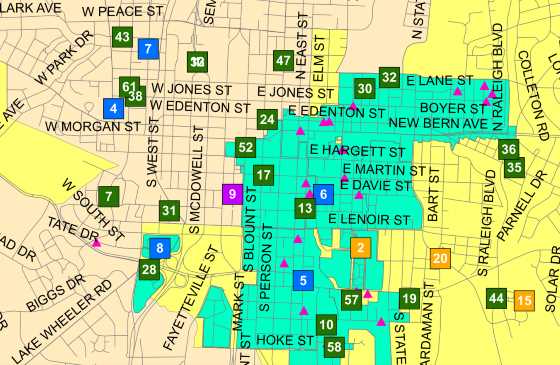 So with all this presented, here is the controversy. The adopted Scattered Site Policy is not being followed. The maps show a higher concentration of affordable housing projects in the low priority areas and very few units in high priority areas.

For Raleigh to be a diverse city with as much equal access across a variety of socioeconomic lines, a quality of a true 21st-century city by the way, communities of mixed-income must exist.

How can Raleigh find the discipline to push against the trend as the city council approves again and again more affordable housing in priority 3 and 4 areas of Raleigh?

Back to Stone’s Warehouse

Let’s swing back to Stone’s Warehouse.

There’s a strong argument for the need for more housing that is affordable in our city. The comprehensive plan proves the demand and how the amount of residents burdened by housing costs has been rising over the last few decades.

However, demanding that affordable housing be included with all projects at the expense of nearby incomes is short-sighted. To create truly mixed-use, mixed-income communities Raleigh should place higher priority on delivering services, amenities that don’t exist. 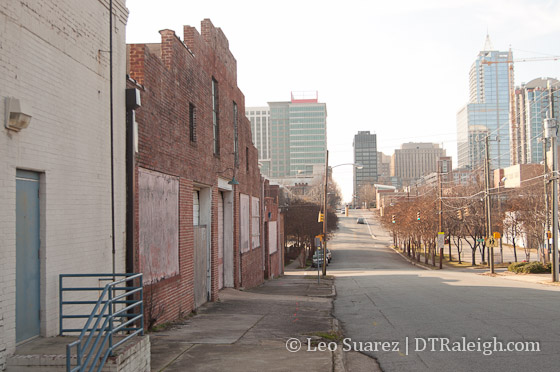 That’s not a blanket statement, sure, but let me paraphrase a woman I heard at a South Central CAC meeting that stood up and kindly commented about the Stone’s Warehouse presentation.

More housing? I feel like we’ve got plenty of housing. We need retail and economic development in our neighborhood.

Stone’s Warehouse is in the middle of a sea of affordable housing projects. It’s also in the middle of a food desert. With a potential grocery store at the site, it’s possible nearby residents would benefit from access to healthy food, a close location, and possibly a nearby job.

With the warehouse being saved, the project should draw huge respect from the neighborhood for the efforts to save the history. Economic development could bring an even more impactful benefit compared to affordable housing at Stone’s Warehouse. Let’s not let a hot, politically-charged topic sway the real need in this location.