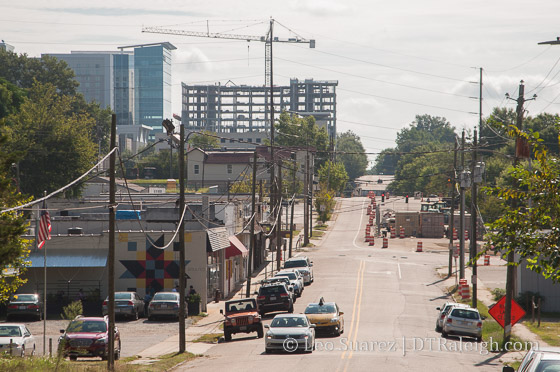 On a warm Sunday morning, I took a walk along South Street, an area of downtown Raleigh that has a lot to talk about. South Street used to be the original southern boundary to the entire city.

Today, you could argue it’s the southern boundary of downtown but generally Western Boulevard/MLK Boulevard holds that title. South Street could just be the boundary of the “walkable downtown” as points south of it have no real business concentration and the area transitions to neighborhoods and wider streets.

The main point of the walk was to get a sense of the two-way street conversion that is currently under construction. With it’s pair, Lenoir Street, the streets have been pointing people in one direction for a few decades. The change may have a significant impact on the area.

Below is a map of points of interest and spots mentioned in this post.

If you don’t see the embedded map, click here. 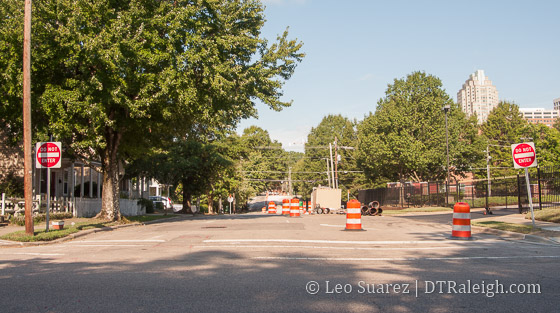 Going east to west, South starts at East Street in the South Park neighborhood. (You guessed it, the southeastern corner of the original city) There is a mix of single-family homes, some newly renovated with others in varying states of age.

Nearby Lenoir Street makes for a great entrance to Chavis Park. When the two-way conversion of Lenoir is finished, eastbound traffic can come from downtown and into the entrance along Lenoir. Bicyclists can also exit the Little Rock Trail on Lenoir to get into downtown, and vice versa. It’s just a more direct route.

The pull of the park should increase over time as the master plan is carried out. You can read more about it on the project page on the city’s website. While Dix Park is exciting and getting all the attention, Chavis Park will be downtown Raleigh’s true park in my opinion. 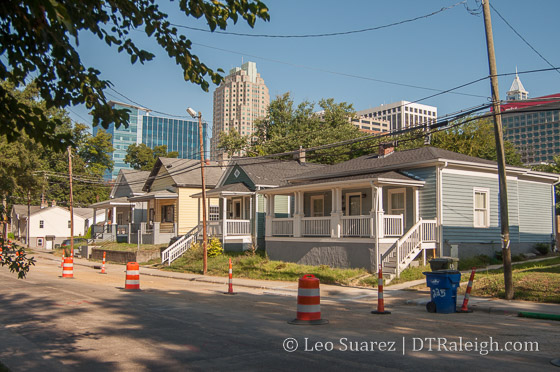 Walking along, the area transitions into Shaw University and for a few blocks, there is a mix of single-family homes and collegiate buildings. Renovations on housing continue here as well with Shaw working on internal changes at the moment.

Recently, Shaw has shown positive signs of getting their books in order as this TBJ article (subscription required) states that employee pay is going up. I wrote about Shaw for Raleigh Magazine as well if you are interested in additional reading on the subject.

As you head past Shaw, you start to enter the Downtown Overlay District according to our development ordinance. While not quite exciting at this time, the area is zoned for urban development at much higher heights.

Standing on the edge of the district at Wilmington Street is a McDonald’s restaurant. I think it’s worth mentioning here as our newest development ordinance may make a big change here.

This particular McDonald’s hasn’t been updated like the ones in the rest of the city and I want to think I know why. If I recall correctly, the owner of this McDonald’s was against the new development ordinance, seen during the public comment period last year, and claimed the ordinance would prohibit him from making renovations.

Snapshot of the UDO and zoning of the area from iMaps, August 2016. Click for larger. 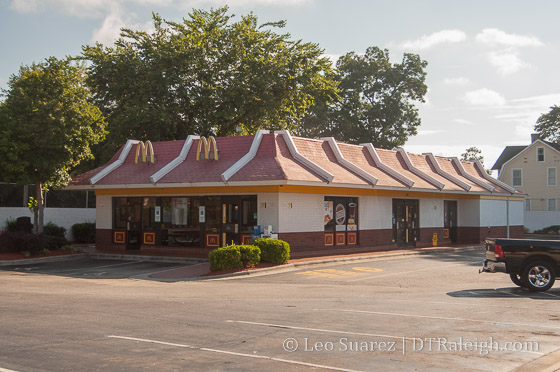 The “Urban Limited” designation of that property dictates that parking is not allowed between the building and the street. I guess you can’t level the building and bring in a “McDonald’s in a box” like others have in Raleigh.

For now, we have an antique at the corner of Wilmington and South until an entirely new development comes about. I’m sure there are other examples of this coming change on the fringes of downtown due to the new development ordinance.

Next, you have the city-owned parking lots in front of the performing arts center. The city is thinking about how best to dispose of or use these properties, along with many other ones in downtown. Raleigh Agenda was at a recent public meeting about this and has more:

The most enviable property the city owns downtown may be the two-and-a-half acres at the south end of Fayetteville Street. Now a parking lot, the site sits directly across the street from the Duke Energy Center for the Performing Arts. It is zoned for forty stories.

The same conversation also includes some of the gravel parking lots around McDowell and Dawson Streets. All I’ve seen them used for now are parking for amphitheater events, storage for convention center events (trailers, etc.), and fireworks viewing during July Fourth and First Night.

Here are all the properties that the city owns in this area. 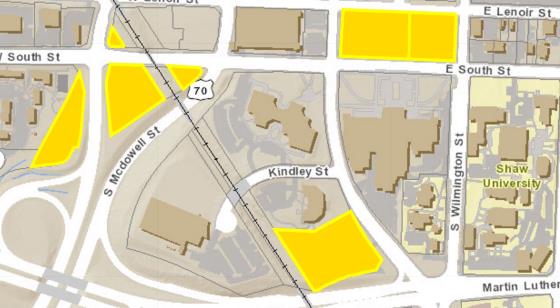 No surprise to frequent readers but the Residence Inn hotel along Salisbury Street has topped out and is moving right along. I’m sure it will support the convention center but being under the 400 room magic number, it may or may not help book very large conventions. 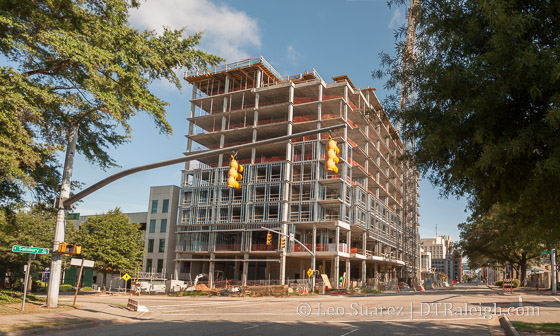 Continuing east, the view of downtown from South at Dawson Street starts to get more and more prominent. You start walking uphill and the view is really photogenic. 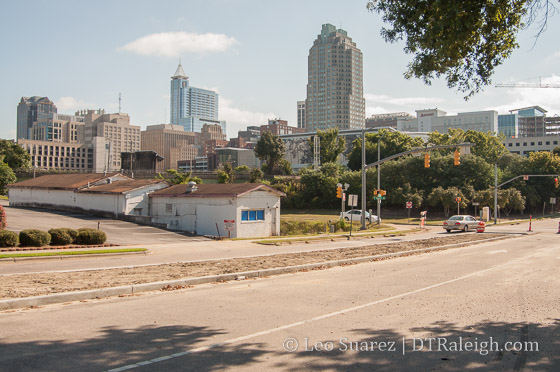 The Heritage Park neighborhood spans from Dawson to South Saunders here along the southern end of South Street. Across South, long-time businesses and buildings have been operating. The South Street two-way conversion is taking a very wide South Street and adding bike lanes and landscaped medians here.

The TBJ reported earlier this month of a new development. NitNeil Partners, a builder of high-end storage, plans to put a four-story building where Rose & Sons Auto Service is currently located. The article states that they want to break ground this Fall.

The property is actually quite large and also faces Lenoir Street. The new storage facility will certainly have a major presence on this block. 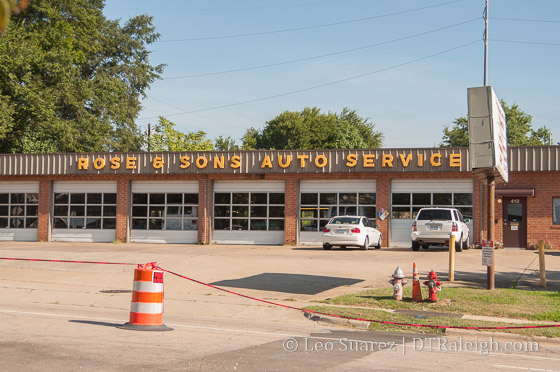 Hopefully you’ve gotten a lesson on our historic street names as South West Street then intersects with West South Street. (The southwestern corner of the original city)

Around the intersection with West Street, older buildings contain convenience stores, a tattoo shop, and a club. Land is being cleared for 12 new townhomes along West between South and Lenoir. According to the site plans, there will be three four-unit buildings on the site with vehicle access to the alleys on Lenoir Street. 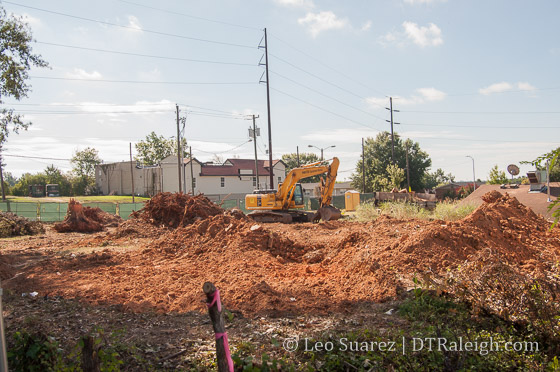 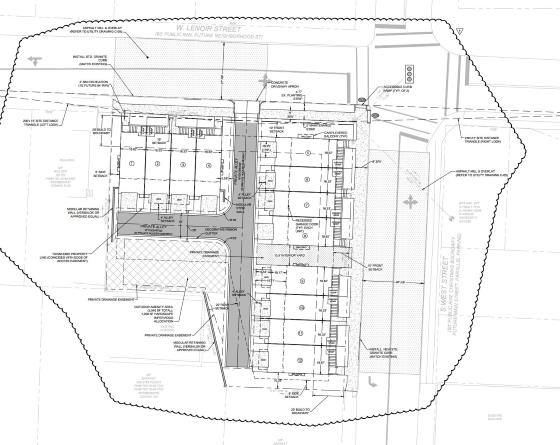 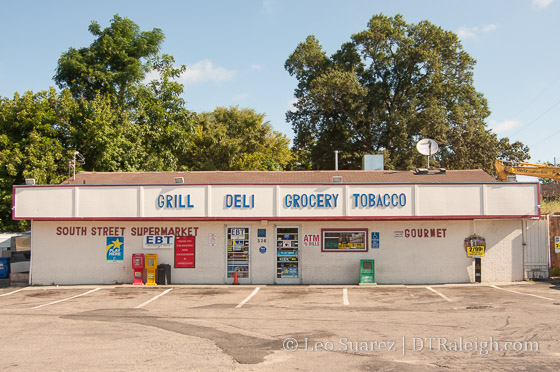 The hub of West South Street is probably found at Saunders and South, where a line of urban-facing buildings create a cluster of retail space. Shops such as Holder Goods, Boulted Bread, and Artikle 74 have moved in recently creating some neighborhood urban-scale activity. 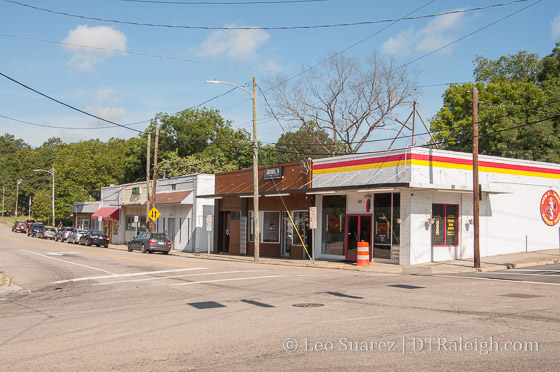 The walk finally ends as South Street heads into the Boylan Heights neighborhood, the western bookend to South Park’s eastern bookend. The view looking back is the header image of this post.

South may become a strong artery for neighborhoods to get into and out of downtown. The residential elements already seem to be there with some institutional aspects, like Shaw, adding a different element that other streets may not have.

There’s certainly a lot to follow on the southern edge of town.