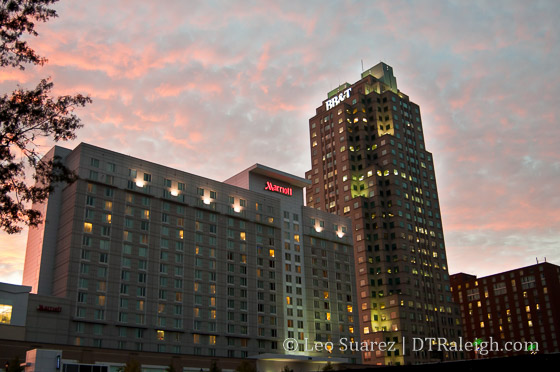 In December 2014, the city started the process on a downtown hotels feasibility study. These efforts were to understand the Raleigh hotel market better and determine the benefits of going after another large hotel in the downtown area in order to support much larger conventions than we have today.

It has been widely talked about how lacking downtown Raleigh is with respect to the quantity of hotel rooms there are but the study would take this conversation one step further. Is another hotel the size of the Marriott, for example, really needed and if built how would it perform?

The results of the study are posted here and I’d like to go through it.

The study starts off by saying that the Raleigh hotel market is at a record high this year, recovering from and surpassing prerecession levels now at a 73% occupancy rate. Downtown, including nearby, hotels are working with an average $135 daily room rate. The business community are our biggest visitors, making up 46% of the demand. The Marriott is currently leading with per room revenue at $108 each and the Hampton Inn has the highest occupancy rate.

In terms of supporting the convention center, the Hampton Inn, Marriott, and Sheraton are the biggest supporters. The Holiday Inn, formerly Clarion, was the weakest but the report suggests that the recent change should help improve that. 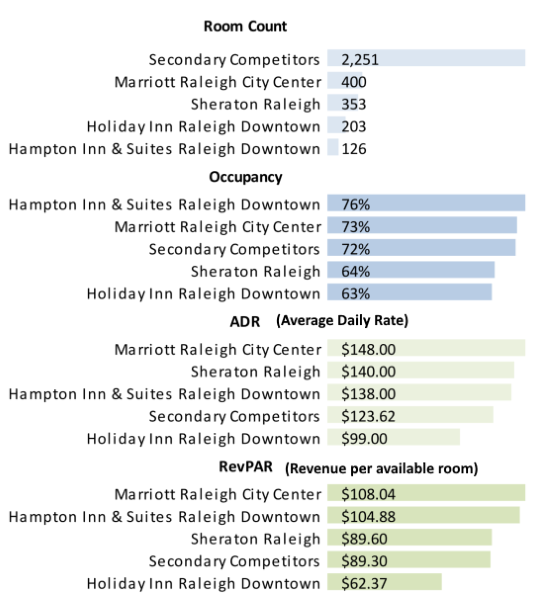 The report breaks down the current hotel demand into three main categories:

The market benefits from a healthy mix of demand sources. Commercial travelers make up nearly half of all room night demand. Local businesses such as Citrix, Red Hat and PNC Bank drive much of this demand. The Raleigh Convention Center and hotels with function space attract meeting and group business, which makes up nearly one-third of occupied room nights. Leisure demand drives business on weekends and holidays.

Seasonal demand does fluctuate with Spring and Fall being strongest, a dip in the summer, and the lowest hotel demand is in December and January. During the week, Tuesdays and Wednesdays are strongest because of that large commercial demand. After that, the leisure visitors are filling rooms on Friday and Saturday. Not surprisingly, Sunday is the lowest. 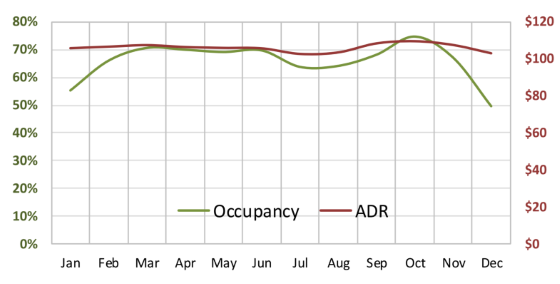 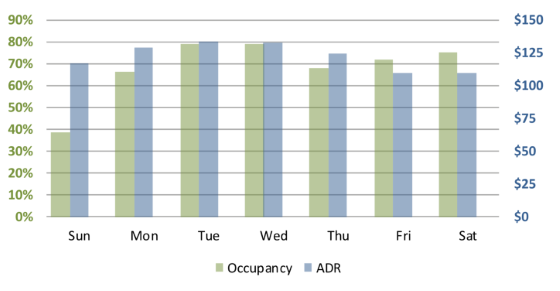 A part of the report analyzes responses from a survey that was taken by event planners. 116 responses from planners in and out of North Carolina were put together to bring us the following messages:

From the survey responses, some strengths and weaknesses were extracted. Our two biggest strengths were the amenities of downtown and the ease of access while our biggest weaknesses were due to inadequate hotel packages and limited air service. 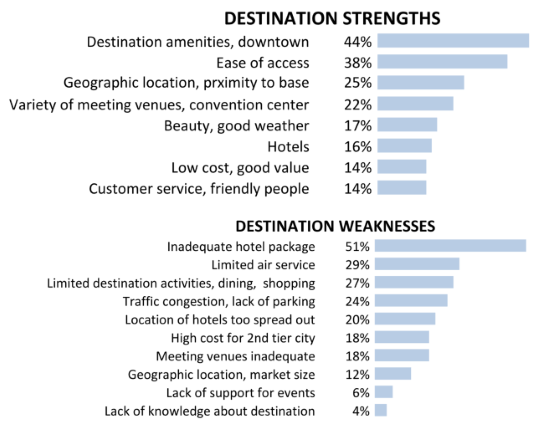 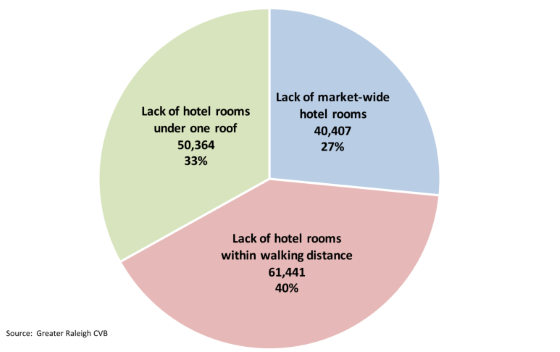 The air service weakness, while being the second biggest, is still far behind the hotel package weakness so looks like this one needs to be addressed. The others are low enough to the point where we maintain them at those levels or better.

It looks like we’re also losing bookings due to the amount of rooms in one building. We don’t have a hotel where one can book a large block to support an event. With the Marriott being the biggest at 400 rooms, if this data point increases over time that might justify a hotel with more rooms in one location in the future.

Walking distance hotels are also very important with two-thirds saying it is a must.

From an event planners point of view, it looks like we have some work to do. 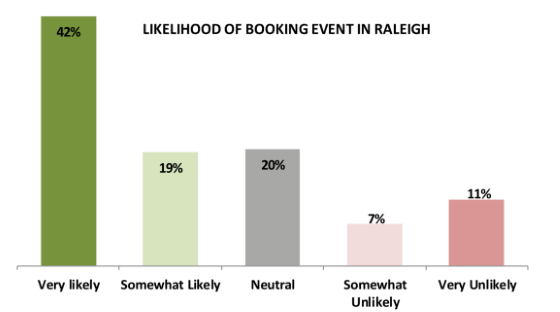 Market Outlook
The Market Outlook section focuses on upcoming projects that will provide a new supply of hotel rooms. About 750 new rooms are projected to be in Raleigh by 2018.

In downtown, we can look to this blog and elsewhere for news of projected hotel projects.

I’m getting a sense from this report that a couple of factors are tightly coupled. Occupancy rates will fall if we are building faster than demand which will cause the prices to drop. (ahem, and revenue) However, at this point, it seems that a larger hotel (400+ rooms) than we have available today is what is needed. It also needs to be near the convention center.

The report assumes that the planned 750 rooms through 2018 are going to be built and shows us what the occupancy rates would look like if we added an additional 400-room hotel to the market. 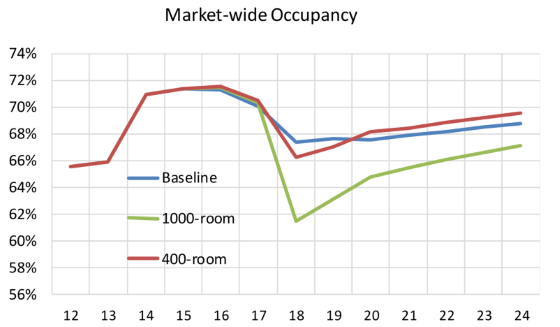 In 2020, we would see a higher occupancy rate in Raleigh with a 400-room hotel versus not having it or even getting something as big as a 1000-room hotel. It looks like a balancing act here for sure.

To get a hotel of this nature, public incentives could be looked at by the city. These include tax incentives, federal programs, infrastructure investments, or even straight cash. The report lists out what Durham has done in their downtown including $1.2 million from the city and county for The Durham Hotel and $1.3 million from the City of Durham for the Residence Inn.

The report then ends with some projected impact statements about what a new, 400-room hotel would do to the convention center. It would cause 31,000 new room nights per year, would result in an additional 30 events per year and an additional 51,000 attendees.

What I’m seeing here is that from a hotel market growth point of view we’re doing just fine. Hotels are being built in downtown as well as around the city. These are 100 to 200 room hotels that are considered limited service or boutique.

However, another way to look at this is how that hotel growth in Raleigh is supporting our convention center. It is likely that it will not and according to the projections, the convention center has plateaued versus seeing steady growth year-after-year. If Raleigh wants to compete in the convention business we’ll have to seriously consider adjacent, larger hotel development. (larger being the key word)

The report also makes some interesting statements about impediments to downtown hotel development:

I really like that second one. Why is our development code saying that a downtown hotel needs to have one parking space per room when almost half those staying are here for business? They most likely came in to the airport, got a cab into downtown, and can be perfectly fine without a car. This needs to be rethought, among other things.

Now, me personally, am wary about Raleigh’s plans to grow the convention business. Convention-dominated downtowns are pretty stale and lack the diversity of uses that I would like to see here at home. The convention business is also a pretty crowded one, with a huge list of competitors out there.

I would really like to see us find other ways to make the convention center more attractive versus just following the standard downtown convention playbook that all other cities are reading. What impact would a premier downtown museum, Dix park, or a hip shopping destination bring to the table?

It’ll be interesting to see where the city goes from here.