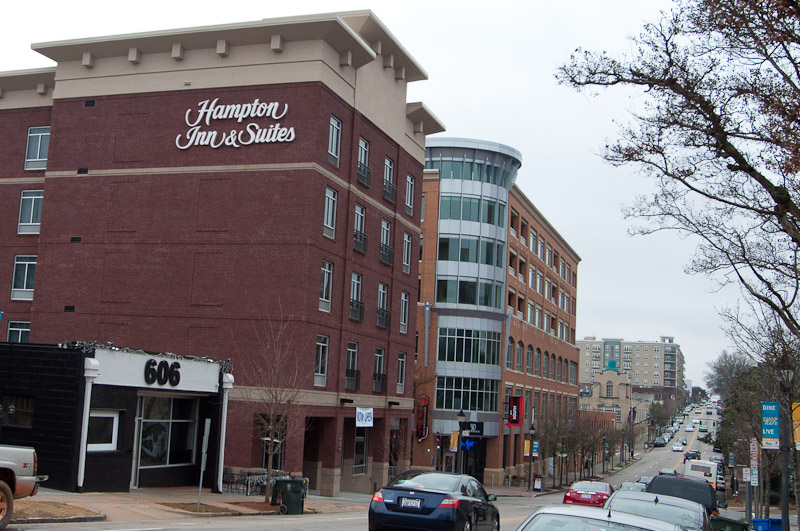 The Hampton Inn in Glenwood South

During this week’s Raleigh City Council meeting, money was approved to go towards a Downtown Hotel Market Feasibility Study. The city’s press release sums it up.

Downtown Raleigh has changed dramatically since the last hotel market study for the area was completed in 2003. The rebirth of the center city has included a return of vehicular traffic to Fayetteville Street; the openings of the Raleigh Convention Center, City Plaza and Red Hat Amphitheater; and new quality housing, office, retail and dining establishments.

The City of Raleigh considers that these new developments warrant an updated hotel market analysis for Downtown. The City Council voted unanimously today to partner with the Greater Raleigh Chamber of Commerce, Greater Raleigh Convention and Visitors Bureau, and Downtown Raleigh Alliance on funding a new Downtown hotel market feasibility study. The City will contribute $20,000 toward the $55,000 study; the remaining $35,000 will come from the three partnering agencies.

The hotel market feasibility study for the Downtown area will include site analysis, a review of rooms and public space needed, hotel type and quality recommendation, impact on the Convention Center complex, and analysis of public/private partnerships existing in the industry.

In addition to funding the hotel study, the City of Raleigh, Chamber of Commerce, Convention and Visitors Bureau, and Downtown Raleigh Alliance will design a request-for-proposals (RFP) to recruit a study consultant and analyze the results and recommendations of the study. The City plans to work with representatives of the partnering agencies in forming a steering committee to develop the RFP and work with the selected consultant to complete the study.

The Downtown hotel market feasibility study is expected to begin in March. It will take approximately four months to complete the project.

Outside of the actual buildings that the hotels are in, there hasn’t been much discussion yet on this topic so I thought it would be good to kickstart that a bit.

Let’s start with what we have so far:

That is a total of 1,127 currently active rooms within the generally accepted downtown Raleigh borders. An upcoming project to add to that is:

The Residence Inn is the only hotel project that I know of that has any real traction. That brings our total to about 1270 rooms.

Small, but growing, is the amount of Airbnb spaces in and around downtown Raleigh. The online space-rental service is rapidly growing across the country and a quick search for Raleigh shows some options in downtown.

I bring this up as the city is currently wrestling with how to properly regulate this service. From an N&O article:

The city won’t be punishing people who offer their homes for rent on Airbnb just yet, but some members of its governing council have dug in against the Internet-powered room-rental service.

A debate on Airbnb in Raleigh could be its own blog post but you could argue that there are mixed messages going on here. For years, city council has said that more hotel rooms are needed in downtown Raleigh. Along comes an innovative service (we’re an innovative city right?) to offer more staying options for visitors and we’re stumbling over how to handle it?

It could just be as simple as a liability discussion really but I’m not an expert on this topic. Currently Airbnb options in downtown Raleigh make up less than 2% of the available room inventory from browsing the website.

The last hotel tidbit I want to mention is the historic Sir Walter Raleigh building at the corner of Fayetteville and Davie Streets. Opened first as a hotel in 1923, it was the premier hotel for visitors in Raleigh for decades before being converted to apartments in the 1970s.

Talk of converting it back to a hotel is not new and there is a 2008 Triangle Business Journal article that describes a failed attempt at doing this:

Hopes of returning the historic Sir Walter Hotel in downtown Raleigh back to its original splendor as a showcase inn have fizzled out.

Alas, the project was contingent on HUD agreeing to transfer the rent subsidy vouchers from the Sir Walter to Saint Aug’s. Despite a letter-writing and lobbying campaign by Raleigh leaders and several members of North Carolina congressional delegation, HUD never approved the swap.

I imagine the Sir Walter could be a very unique boutique hotel, something entirely new in downtown Raleigh at this point. The hotel market study could shed some light if downtown has enough pull to sustain a boutique hotel compared to a national brand.

Building a new hotel is probably much easier than renovating an existing one, like the Sir Walter Raleigh, but the end product could probably not be matched by any new construction for years to come if done right.