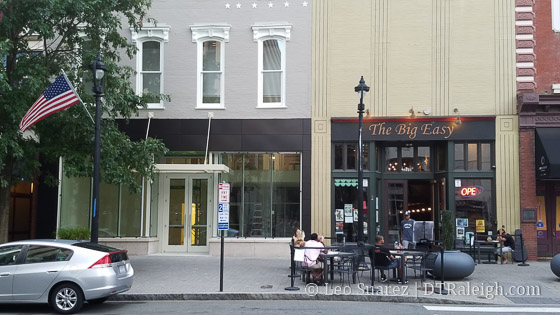 This is a shot of 224 (left) and 222 (right) Fayetteville Street. 224 Fayetteville Street, or the Lewis-Woodard Building, has a fresh new front door. This is a huge contrast to the white marble, colder feeling version it had before. You can see the previous version in this April 2015 Google streetview.

A little background on the building from the Fayetteville Street Historic District registration form.

The three-story, Italianate style building has a brick exterior and extends the full depth of the block from Fayetteville Street to S. Salisbury Street. The facade has a remodeled storefront with original wall treatment surviving at the upper stories and at the cornice. The ground floor has a deeply recessed entry at the south end and a similarly recessed display window at the north end. Elsewhere, the ground-floor facade is covered with large tiles of white marble. The identical second and third stories are four bays wide with one-over-one, doublehung, segmental-arched wood sash windows. Decorative metal window hoods feature keystones and corbels. The elaborate bracketed pressed metal cornice has dentil molding and scrollwork with the same lionshead elements seen in the keystones on the Briggs Building. The three-bay-wide S. Salisbury Street elevation was also remodeled in 1985, when white marble panels were applied to the brick-clad building at the storefront, rising in vertical bands on either side of the center bay, and across the top of the third-story windows. Six-oversix double-hung wood-sash windows remain at the second and third stories; the first floor windows and centered
door were replaced in 1985.

The building appears as two separate structures on the 1884 Sanborn map: a three-story hardware store and office building fronting Fayetteville Street and a two-story tin shop and warehouse fronting S. Salisbury Street. Partners Julius Lewis and Nicholas West had purchased the parcel in two transactions in 1881. Lewis and West ran a hardware store located a few parcels north and across the street at 219 Fayetteville Street that had been in business since at least 1875, according to Raleigh City directories. The business remained at that location until 1883, when it moved to the 224 address, likely into a new building that Lewis and West had erected since their purchase. Lewis became the sole owner of the property in 1894; in 1906, he sold it to Moses Woodard, a local businessman. The building briefly housed the F. M. Kirby and Company Five and Dime before the F. W. Woolworth Company established a store in the building in 1913. Woolworth’s made alterations to the S. Salisbury Street elevation around 1925 and to the storefront on Fayetteville Street in 1957, merging it with the storefront of the Lumsden-Boone Building next door at 226 Fayetteville Street. Woolworth’s moved out of the building by 1972. In 1985, more changes were made to the building to house new owner Raleigh Federal Savings and Loan and other commercial tenants.