The end of Kindley Street, June 2016. Click for a larger, wider view of the site.

I wanted to turn our attention today to what is being called downtown’s Gateway Center. The Downtown Plan calls out the area around the Performing Arts Center and the Raleigh Convention Center as a possible “catalytic project area” and sums it up as:

Coined the “Gateway Center,” this area is the only part of downtown capable of accommodating multiple blocks of large-footprint mixed-use development. Its proximity to the Convention Center and Duke Energy Center for the Performing Arts will naturally lend its future to expanding tourism and entertainment-related uses, such as a large-scale sports and/or cultural facility, additional hotels, or a campus of related businesses.

Regular readers are probably familiar with this already because of the plan’s two concepts for this area, one of them includes a sporting arena. Let’s revisit those two concepts from the plan. 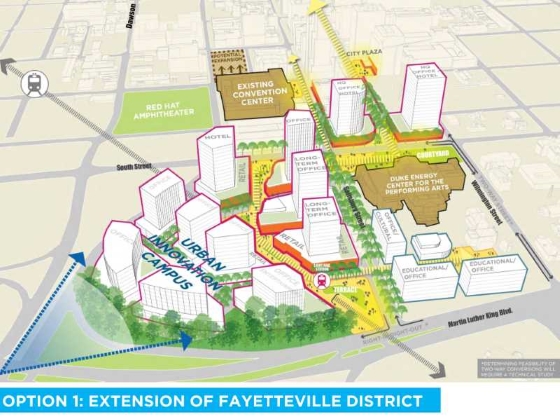 This concept imagines space to develop an Urban Innovation Campus for a new anchor employer or cluster of businesses. With easy access to several forms of transportation and close proximity to Fayetteville Street, the Warehouse District, and the heart of downtown Raleigh, this location has much to offer. New landmark structures provide the missing link between the Duke Energy Center for the Performing Arts and the rest of Fayetteville Street. These buildings could be linked to the Urban Innovation Campus, home to another employer, or even a hotel.

In this concept, the heart of the district is a new citywide destination. Either cultural, entertainment, or sporting in nature (or a mix of all three), the center anchors the district and provides a new draw for the city as a whole. The specific location for this use in the southwest corner
of the district is advantageous for several reasons. Positioning any large-footprint building towards the southwest corner of the district allows its architecture to frame the new southern gateway. The rest of the site is arranged into walkable city blocks that link the new district back to Fayetteville Street. In this way, a single entertainment or cultural use acts as a magnet to draw visitors to and through the district without becoming a barrier to walkability. Siting the largest development at the edge also capitalizes on the site’s natural topography, allowing the potential for underground parking easily accessed from main roads around downtown. Throughout the district, active ground-floor uses and building setbacks help break down the scale of larger buildings.

There’s more in the Downtown Plan which I recommend you download and take a look.

I also want to give some love to one of the most popular posts here on the blog. Reader Will imagined a baseball stadium in the Gateway Center and submitted some sketches. Check them out once again.

It’s important to note that the focus in the Gateway Center, at least according to internet chatter, is around where this possible stadium could go, the southwestern tip. The actual focus area does include the convention center, performing arts center, and the southern end of Fayetteville Street.

However, it’s that southwest tip that I want to zoom in on with a Google map showing the four properties there.

Exploris has been a middle school for some time, located on Hillsborough Street. Two years ago, the elementary school opened in a temporary home on New Bern Avenue. The school has been looking for space to consolidate it all.

The former home of a data center for Duke Energy, the property actually looks perfect for a school campus. The lot has surface parking, an open field, and more room than Exploris needs. Plans call to renovate the extra space and lease it out as office space.

At this point, you, especially the skyscraper fans, may be noticing an incompatibility. This doesn’t seem to match the vision laid out in the Downtown Plan. It may stifle dense development in this area of downtown.

I think you are right but I’d like to lay out a different, more positive perspective.

Let’s look at the timing of things. The Downtown Plan was adopted in late 2015. Exploris has been looking for space since 2014, maybe even earlier. With the plan being a 10-year vision, we shouldn’t expect announcements for multi-building clusters in the south of downtown not even one-year into the plan.

We have until 2025 to really see the Gateway Center blossom and we can’t assume that Exploris is going to stay in this space forever. Like any other business or institution, they may outgrow the space or move into the new development of the future.

For me, I’ll take a progressive school like Exploris here than a monolithic infrastructure company like Duke Energy any day. I see Exploris “cracking the mold” to that site in a way.

One factor that I believe greatly ties into Gateway Center is Dix Park. These two areas are so close and Gateway Center could really be the connection between downtown Raleigh and Dix Park. Planning is in the infant stages as this year’s city budget, recently approved, starts the purchasing process for the land.

The MLK/Western interchange with McDowell and Dawson Street limits connectivity but it could be a great challenge for the future with respects to tying Dix into the downtown fabric.

The city also has a Southern Gateway Corridor Study underway with a final plan expected by this Fall. This is the area from MLK/Western to about I-40.

The City is exploring ideas for land use and transportation improvements along the corridor that will benefit businesses, residents, motorists, transit riders, pedestrians, and bicyclists.

The study even highlights Gateway Center in their map!

With more development taking place back in downtown, there are a lot of moving parts here. The Gateway Center and the vision laid out in the downtown plan still have a great shot at coming to life.