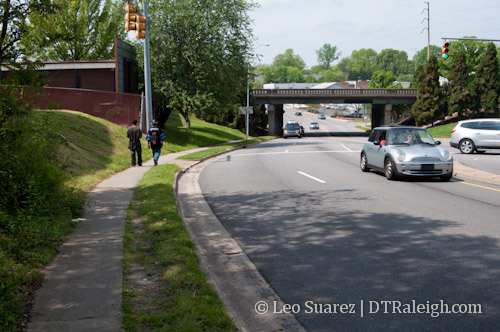 There’s a new project that’s growing some legs in downtown Raleigh. Link Peace Street is a vision from Raleigh residents for a more walkable environment on Peace Street. It coincides with the Capital Boulevard Corridor Study and hopes to put another alternative onto the table that is currently not being considered. I’m helping out with the effort and the core focus of it revolves around creating a plan for an at-grade intersection at Capital Boulevard and Peace Street.

Over the next few days, more information will be put onto the vision website of Link Peace Street so I encourage readers to check out the site we’ve built and sign up for updates.

The Capital Boulevard Corridor Study, taking public comments at this time, targets private investment in the area using several projects. Some of those include an expanded greenway, a park at the old Devereux Meadow site, and multiple tweaks to Capital Boulevard itself. We’ve mentioned here before that the state of North Carolina is going to replace the bridge over Peace Street within a few years. The study wants to piggyback on that project and is considering some alternative routes to getting on and off of Peace Street. You can read about those alternatives on the Peace Street Vision document in the sidebar on the city’s website. These ideas are what planners think will help spur private investment in the area.

All plans being considered so far include the new NCDOT designed bridge and Link Peace Street wants them to consider the ‘no bridge’ option. We feel that the upgrades to Capital Boulevard, outlined in the study document, only promote more speed and will continue keeping vehicles moving through the area rather than stopping at a destination. Peace Street is the northern border of downtown Raleigh but most people don’t see it that way as the built landscape is not meant for a downtown at all. It’s possible that an environment that balances pedestrians, cyclists, and vehicles can promote development that is appropriate for downtown Raleigh and is a much better use of land.

With vehicles speeds kept the same and not increased, a walkable Peace Street will connect the neighborhoods rather than be an obstacle between them. In March, the Blount Street Commons project was asking the Raleigh City Council for a zoning change to allow for more density. At the same time, there is an apartment boom near Glenwood South. Both neighborhoods are so close yet feel much farther because of the uneasy walk down Peace Street in its current state.

It is a half mile walk from the Mellow Mushroom to Tyler’s Taproom yet so few people make that walk. In comparison, Fayetteville Street from one end to the other is a half mile. Peace Street may never have the towers and historic structures of Fayetteville Street but we think that we can atleast set up Peace Street for the same walkable experience. To have it, it starts with people and not vehicles.

The 2030 comprehensive plan specifies that this area is in the Core Business District category. It states:

This category applies to the Raleigh Central Business District, and is intended to enhance Downtown Raleigh as a vibrant mixed use urban center. The category recognizes the area’s role as the heart of the city, supporting a mix of high-intensity office, retail, housing, government, institutional, visitor-serving, cultural, and entertainment uses. Multiple zoning districts apply within the CBD, corresponding to the different character and vision for its various neighborhoods. The maximum residential density in this area would be 320 units per acre with densities tapering off towards edge areas adjacent to established residential neighborhoods, but not falling below 40 units per acre.

The Capital Boulevard study wants to widen lanes and help the flow of traffic. This does not fit with the description above and Link Peace Street feels that goes against the plan adopted just a few years ago.

How can we continue to do what we’ve been doing here in the corridor and expect different results?

Insanity: doing the same thing over and over again and expecting different results.

We’re hoping to build support for the idea before the study is brought to the city council before the May 1st meeting.