What stands to be a great example of smarter development for downtown Raleigh, the still to come The L Building has been on hold for almost two years now. This office over retail project has suffered the same financial difficulties that other canceled or on hold projects have faced.

The L building, in its current plan, will wrap the Wake County parking deck that sits on McDowell Street, shown in the picture above. The deck, built to support the new county Justice Center now under construction, is open and currently in use. While the publicly funded parking deck happened, The L site now lays empty and the developer continues to ask for more extensions to get the books straightened out.

The L, if built, will hide the parking deck along McDowell and Davie Streets but for now we have a rather large gray wall. For almost two years, this wall has been naked but that should change soon.

The latest extension, until May 2013, was approved by the Wake County Board of Commissioners in their December 6th, 2010 meeting with certain conditions. Looking at the meeting minutes, here are some of the more interesting of those conditions:

To the best of my online search abilities, the banner discussion has not made it to the city yet. The relationship with the city and Empire properties is a solid one so there is a good chance it will be approved by them as well. Below is a rendering of the parking deck with the proposed banners. 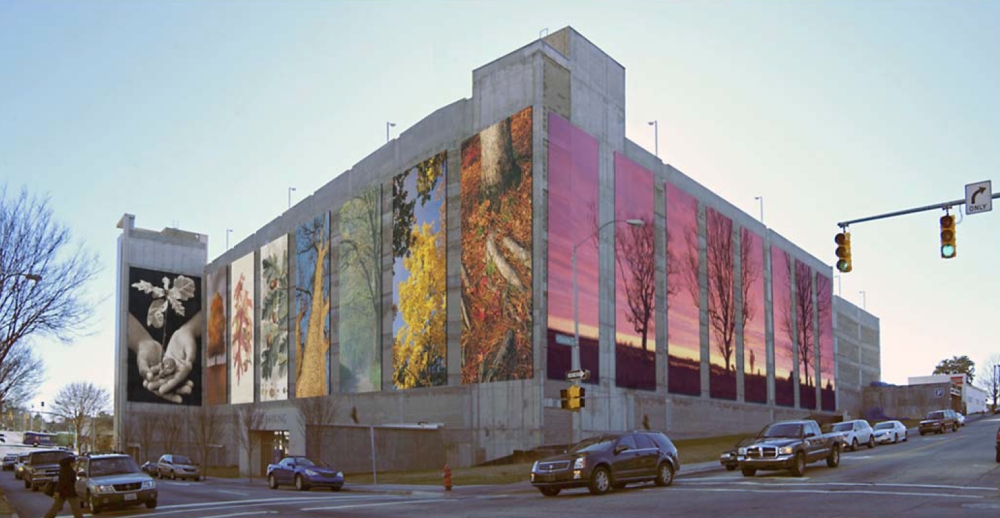 Expect the naked wall to be covered up in time for Spring this year.

See more posts about The L.