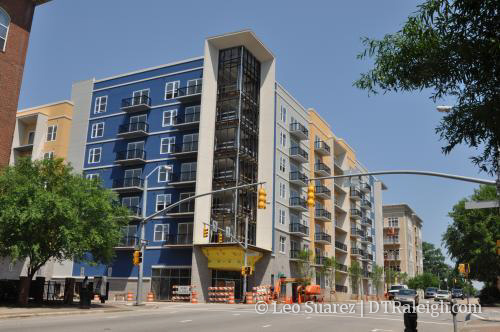 It does not take a scientist, or some fanboy blogger, to tell you that more people are spending time downtown. Overall, more restaurants are opening up and being patronized by people outside of the nine to five work week hours. It still takes a major event to bring more people downtown on a weekend day then a weekday but the once sleepy ghost town has recently found new life. Visitors are on the rise because of the options on nights and weekends and the amount of downtown residents have slowly risen as well. I’ve always thought that downtown is at an interesting point with new businesses and new residents. New places may not open because of the lack of residents living close by. At the same time, people may not want to move downtown because of the lack of available shops and convenience stores. Slowly, downtown Raleigh will break this cycle when it reaches a certain amount of residential density and I see potential in Dawson St. leading the way.

I want to mention The Hue condo building and how it may be a key boost in residential density in downtown. The Hue and its neighbors, Park Devereux and The Dawson, form a cluster of people living close to each other unlike any other area. According to the Downtown Raleigh Alliance, these three buildings have 319 units between them. Spanned across only two blocks, this will be the densest residential area when The Hue opens. (dense by Raleigh standards) Putting their look and architecture aside, I think I like what has been built here. The five to seven story buildings do not feel overwhelming and create a more livable environment compared to a corridor of twenty plus story towers. If another condo building in the seven to ten story range was built across the street from The Dawson, we may have a condo neighborhood district forming.

With a couple hundred or even a thousand homes so close to each other, new types of restaurants and shops may pop up. This location, away from the more ‘touristy’ centers of Fayetteville St. or Glenwood South, should see neighborhood style cheap eats, convenience stores, and could support a small grocery store too. I’m not knocking on some of the great places to eat and drink around Fayetteville St., I spend most of my time there right now. The only problem with the core downtown area is the higher cost, resulting in much higher rents. The places that are now open need to draw in people from outside of downtown and become a destination to be very successful. They also rely heavily on pedestrian traffic. Downtown Raleigh will really reach a new level when we have businesses that can solely survive by the condo-dwellers that live within a few hundred feet around them.

I’d be curious to know if the Urban Design Center has any plans or strategies to encourage this kind of density. 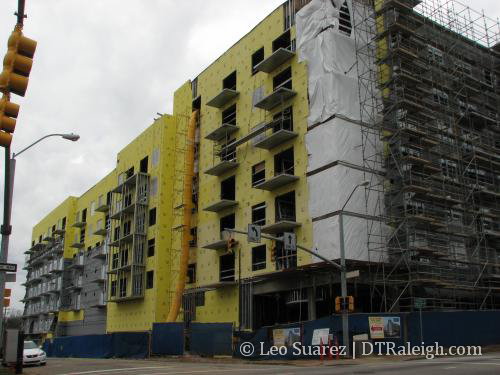 The Hue is moving along just fine. There is a ton of scaffolding on the exterior but one side is starting to show the yellow/blue/gray colors that will cover the building. The ground floor retail space is a big welcome to this area. The parking deck looks complete so can we call a 2009 completion date? Maybe. 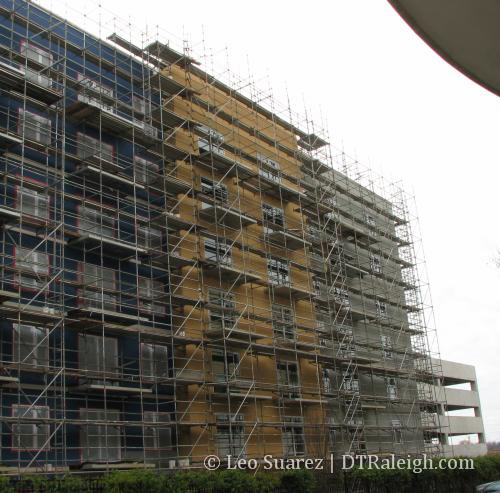 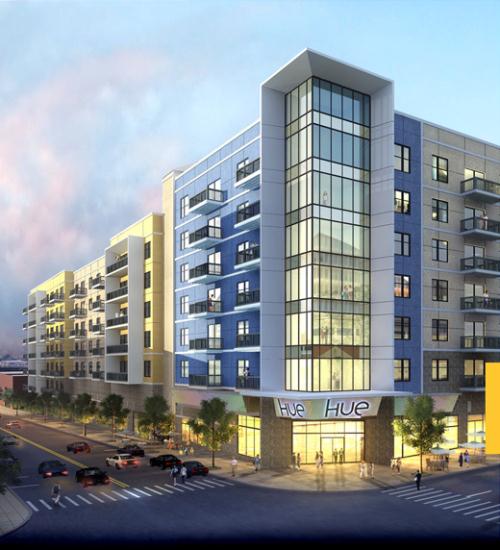 Wide view of The Hue construction. 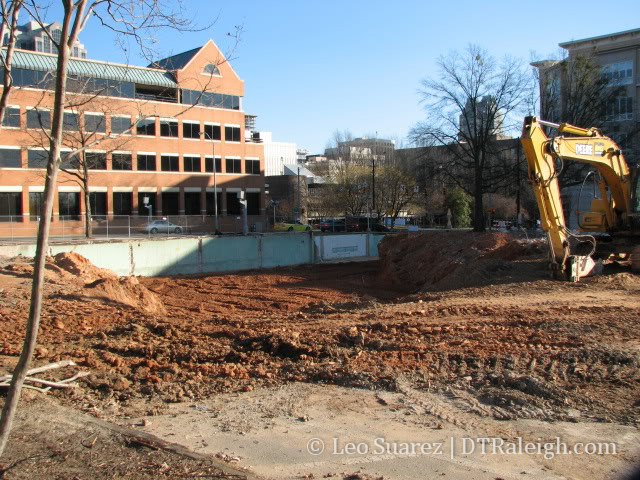 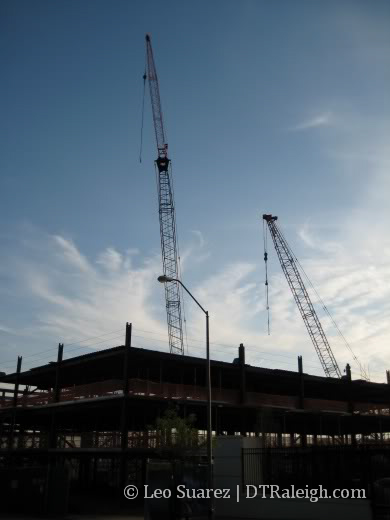