Email readers: This blog post has a virtual reality image. Read the post on the blog to see it.

One day, I was riding south into downtown on Capital Boulevard and caught a glimpse to the west towards Glenwood South. The clearing of so many buildings just struck me and I had to come back to take some photos. This would have really been nice to have a drone for this post but either way the photo above attempts to show how much has been cleared.

Between Johnson and Peace, Capital and West Streets almost all buildings have been demolished this year. With the help of iMaps, I estimate about 6.5 acres have been cleared in just this area.

Well, probably not. A residential neighborhood, the late Smoky Hollow, isn’t being cleared again but the state is still flexing its eminent domain muscle for highway improvements. Let’s hope this time it sticks. 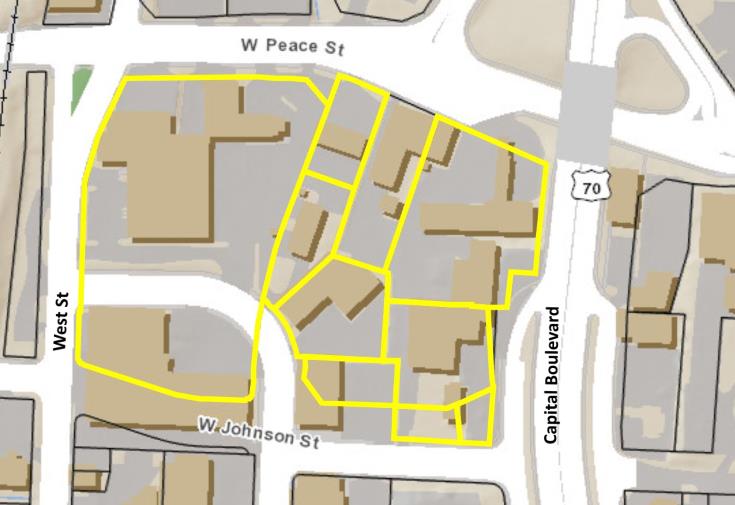 Click for larger. Note the new Johnson Street connection already planned for. Next, the Harrington connection to Peace.

The photo is from the west side of Capital Boulevard with the new bridge over Peace Street directly to my right. I will probably not be able to get an exact after-shot once that project is complete but I’ll certainly try. (safely)

First to watch is the 12-story residential tower called Peace, formerly Smokey Hollow, at the corner of West and Peace Street. It was announced that a Publix grocery store would anchor the ground-floor space of this project. I bet that’s a huge selling point for more development in this area.

That’s all that’s confirmed at this time but I’m sure there will be more coming and with it all currently zoned for a maximum of 12-stories, an entirely new neighborhood (dare I say Smoky Hollow?) could be created with that kind of density. (by Raleigh standards anyway)

For more views, here’s a VR shot I took while up there. If you can’t see the embedded VR view, try seeing it directly on the blog.

[UPDATE: 12-19-17, a RalCon reader has submitted a different view of the area from the 510 Glenwood building.]