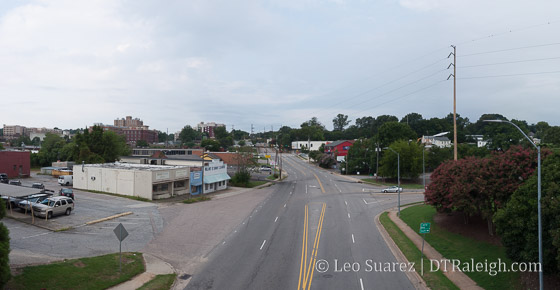 What would it take for a Raleigh neighborhood of the 1900s that was completely wiped out, literally paved over, to come back? It seems naming a new development in the 2000s after it would be a start.

A quick aside, I’m hung up on the spelling for some reason but to the best of my knowledge, the name of the neighborhood that was in this area of downtown Raleigh was Smoky Hollow (smells like smoke) and not Smokey Hollow. (the proper name of Smokey) As of this writing, Smokey Hollow will be the new development that is planned and Smoky Hollow will be the neighborhood that once existed in this area of Raleigh. (I’ve also tweaked previous posts to try and be consistent)

Now that I’ve got that out of my system, I’d like to dive back into the history of the area and how Smoky Hollow was cleared out by the State of North Carolina and their drive for what was called “urban renewal” in the 1950s and 1960s.

As part of a former project (Link Peace Street) that I was a part of, active in 2012, I have polished off this Google Map for reuse. Below is the map containing the old Smoky Hollow boundaries as well as former streets. There are also historic and present day photos.

As for the history of the neighborhood, Anna at her blog Reinvent Your Wheel has a great take on the area’s change in her blog post, “Capital Blvd: Raleigh’s Great Divide.” I’m posting a piece of the post with permission.

Smoky Hollow (which I’ve also seen spelled as “Smokey” Hollow) was a blue-collar neighborhood in downtown Raleigh prior to the construction of Capital Blvd in the 1950s. Everything I’ve found hints the it was a racially mixed area with both black and white residents which would have been somewhat unique to that time period. Its boundaries were roughly Peace St to the north, West St to the west, North St to the south and Wilmington St to the east. The residents of Smoky Hollow worked primarily for the railroad, mill, or other industrial businesses in the vicinity.

Children growing up in Smoky Hollow entertained themselves by playing on the train trestles and in the Pigeon House Branch creek, which has now been mostly buried. It was a solid community although it seems like it was considered to have been a little rough around the edges. The construction of Capital Blvd, with the addition of other projects, brought about the end this unique piece of downtown by the early 1960s when almost all the residents were forces to relocate. Only a few pieces of the Smoky Hollow neighborhood remain, including Finch’s Diner on Peace St and the store fronts found to the west of it. 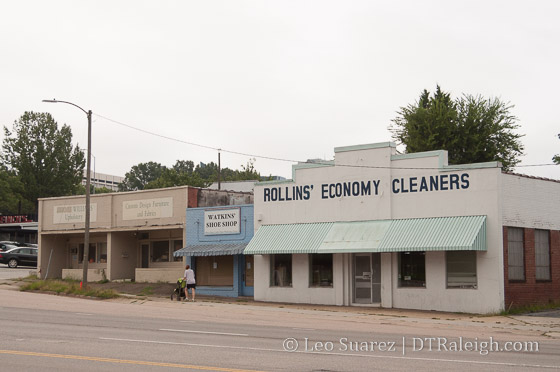 Anna’s post also has a pair of maps, showing the before and after effects of Capital Boulevard punching through the Smoky Hollow neighborhood. In short, a grid of streets was removed resulting in two anti-urban hits to downtown Raleigh; a fast moving highway and the state government complex.

A neighborhood faded away as well as a baseball park. The Devereux Meadow ballpark, which has been mentioned on this blog before, predates capital boulevard, as shown in this 1952 aerial photo taken by the News & Observer. 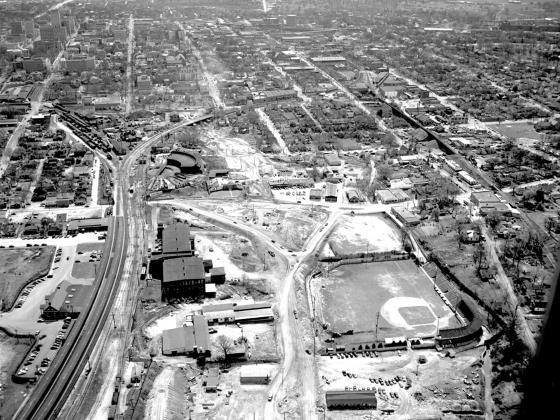 Reprinted with permission from The News & Observer. Click for larger.

This photo shows Capital Boulevard (then known as Downtown Boulevard) under construction in 1952 or so. The project was finished in 1953. The view is looking south. This photo shows the intersection of Peace Street and Capital Boulevard. The ramps for the bridge have been graded. Devereux Meadow ballpark is in the foreground and across the left field fence is the Raleigh Cotton Mill. Across the railroad tracks from the mill is the Seaboard Passenger station. In the center is the Seaboard half-roundhouse adjacent to the rail yards. To the right of the roundhouse is Finch’s with cars parked in front. To the right of Finch’s is a collection of storefronts including the dry cleaning building. These are among only a handful of buildings still standing in the former Smoky Hollow neighborhood. At the right, you can see the Norfolk Southern tracks and trestles including the one that passes over Peace Street. The boundaries of Smoky Hollow were basically that area between the Seaboard railroad yards and the Norfolk Southern Railroad tracks, and between North and Peace streets.

Let me add that you can still see some of the Smoky Hollow houses along West and Harrington Street.

The finished product can be seen below in this November 1964 photo, again from the News & Observer. The neighborhood is gone at this point. 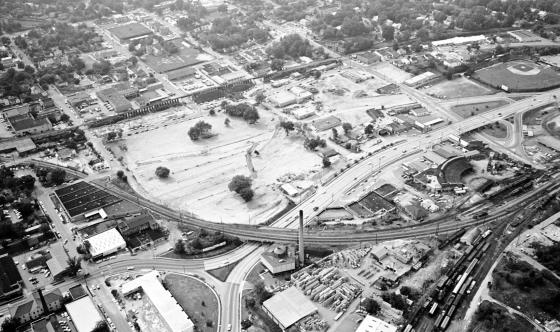 Reprinted with permission from The News & Observer. Click for larger.

Over time, the area has filled in, mostly with state and county-owned properties. Economic development? I’m not convinced that was a successful result of the Capital Boulevard project of the 1960s.

Moving to the present, the original area of Smoky Hollow hasn’t seen any real movement lately except for the West at North tower. Located at, you guessed it, West and North Street the 17-story residential building opened in 2008 and is probably the anchor to any West Street activity near Glenwood South.

With a lot coming to West Street, the announcement of the Smokey Hollow project, artist’s sketch below, shows that we may be putting the pieces in place to bring back residential to Smoky Hollow once again. 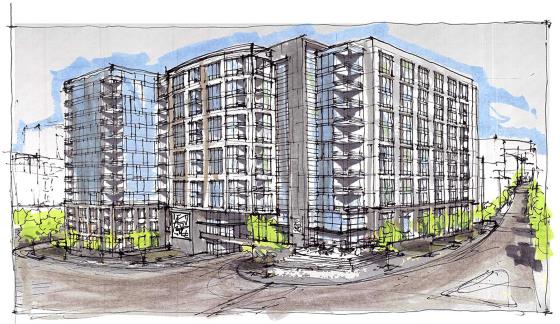 Smokey Hollow, planned for the corner of Peace and West Street. Click for larger

It may not look the same as 75 years ago but the Smoky Hollow of the future may exist in mid-rise apartments with ground floor retail.

In a future post, let’s take a look at some of the factors supporting this residential drive in Smoky Hollow. The pieces are all there including a creek, a new park, and calmer, better connected streets.