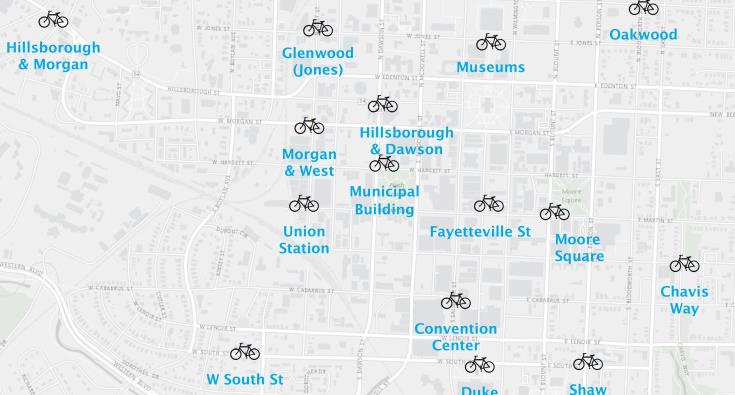 The city has posted their first map of proposed stations for the upcoming Raleigh Bikeshare system. Jump over to bikeraleigh.org to see the whole thing.

The system plans for 30 stations and 300 bikes. Planners want the system running by Spring 2018. This map is the first draft of proposed stations and further work is needed to finalize them.

The system has stations as far out as the North Carolina Museum of Art, the Walnut Creek Wetland Center, and St. Augustine’s University. Dix, Chavis, and Pullen Parks get stations with the majority being in and around downtown and NC State.

Basically each district in downtown has one or two stations as well as the nearby neighborhoods like Oakwood, Person Street, Seaboard, and South Street.

I imagine that with planning a bikeshare system, and only having 30 stations, hard choices need to be made. You can’t spread them out too much, making the system less useful. At the same time, they can’t be too close together which makes the system lack coverage.

I want to guess that spots like Fred Fletcher, Five Points, and Centennial Campus were on the fence as these locations are outliers on a map with little to no bike paths or greenways in their direction.

Next up comes finalizing the station location and announcing rates. Also, I’m hoping there are plenty of e-bikes in the system cause if I didn’t have to actually pedal, you know, that would be great!