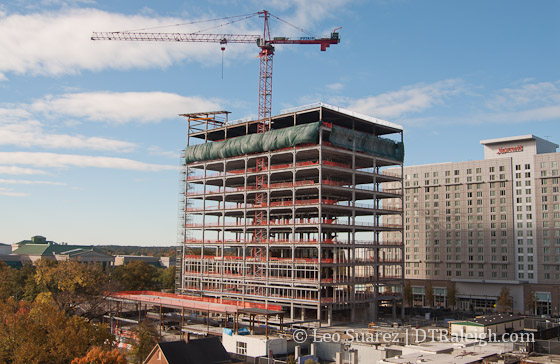 Here’s a nice Fall photo of the Charter Square construction site on the south end of Fayetteville Street. The southern tower has topped out and siding is starting to rise up along each side. You can also see the space for the future northern tower to the right in the foreground.

What I kind of wondered about was the low-rise section being built along Wilmington Street. In the past, I had actually assumed that the building footprint was to go from the Fayetteville Street sidewalk to the Wilmington Street sidewalk but that’s not the case here. I’ll admit to overlooking this when presented with the one rendering back in 2013.

Digging out the site plan from the city’s website we have this screenshot below. 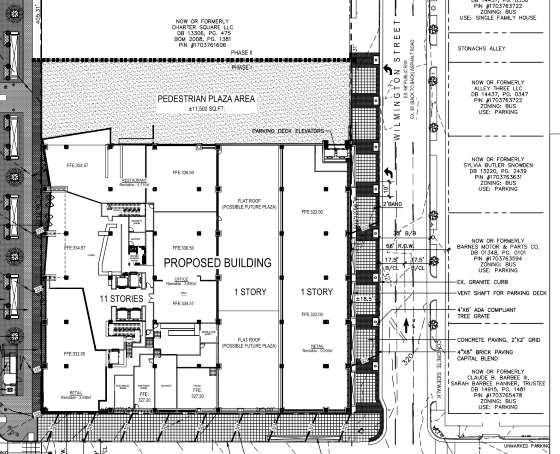 This site plan shows that there will be a one-story building along Wilmington Street with about 9,000 square feet of retail space. Between it and the southern tower of Charter Square would be open space. The text on the site plan calls it “Flat roof (possible future plaza)” Indeed when looking at what is being built now, a roof seems to be going in.

To the immediate north of the tower and retail spaces is a pedestrian plaza cutting the block in half. The northern tower, which is still in the planning phases as of today, would complete Charter Square.

The plaza adds some nice complexity to this block as it aligns with the existing Fayetteville Street crosswalk and the pedestrian entrance to the Marriott hotel. The site plan also shows retail/restaurant space on the northwest corner but mostly facing the plaza. I wonder if this is the space where Eschelon Experiences’ new restaurant may go?

The building should be done by Summer 2015.