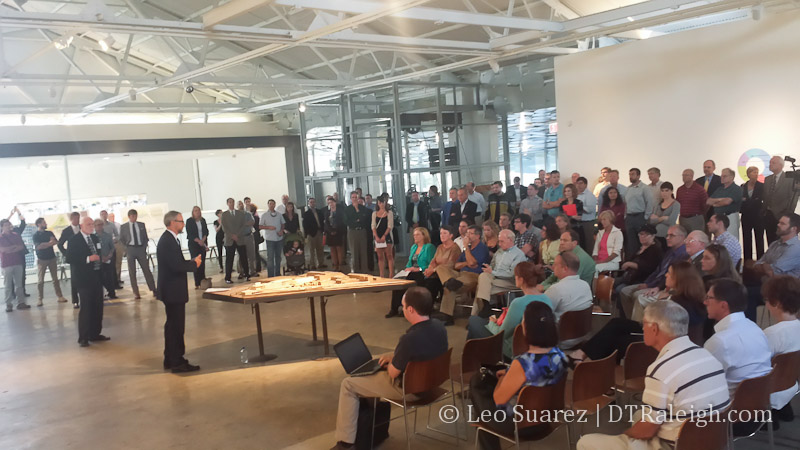 I’m at the Raleigh Union Station meeting and wanted to get this out. The mayor announced a groundbreaking for March 21, 2015.

The meeting tonight was more open house than new information. The groundbreaking announcement was the biggest piece of news and the March 21 date is not an accident. March 21, 2015 is the 175th anniversary of the first train to arrive in Raleigh.

In addition to the already posted renderings, a fantastic model of the Union Station site was on display. 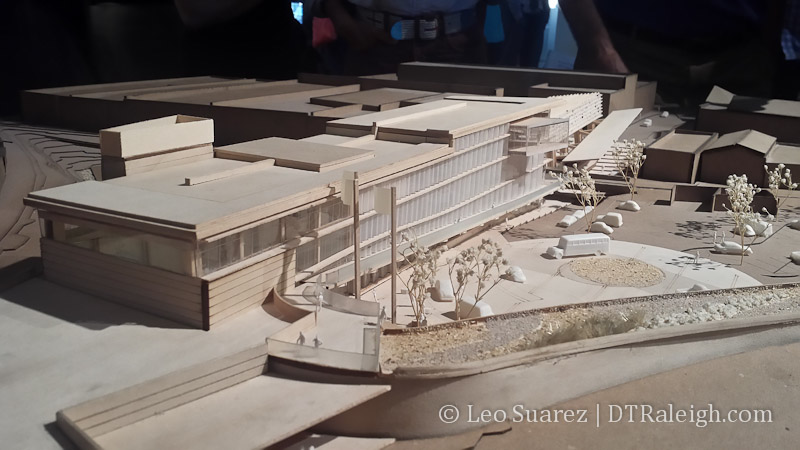 They estimate about two years for construction so look forward to the new station opening sometime in 2017.

[UPDATE: 9-11-14]
For posterity I’m copying the city’s press release on the topic that came out after this event.

On March 21, 1840, the people of Raleigh were witnesses to history. On that Saturday in the spring, a train rumbled into Raleigh for the first time. Over the next century, the era of the locomotive would dominate transportation in the modern world. Eventually, cars and planes would supplant the locomotive. But few inventions shaped the physical destiny on nations like the train.

On March 21, 2015, the people of Raleigh will once again have the opportunity to witness history. On that Saturday, officials will break ground on the first phase of Raleigh’s Union Station, a joint initiative of the North Carolina Department of Transportation Rail Division and the City of Raleigh. The estimated cost of the first phase of the project is $73 million. Current funding for the project totals $66.25 million through a series of federal grants, and state and local matches. The City’s contribution to the construction is $5.75 million. The first phase will include the renovation of the Dillon Supply Company Warehouse at 510 West Martin Street into a passenger rail facility.

Once completed (estimated date of 2017), the station will transform the transportation infrastructure of Raleigh. Not only will the station serve Amtrak passengers, the station will add new retail and commercial office space to its warehouse district location. The station will feature three levels of restaurants, shops and offices, and offer visitors a rooftop view of the Downtown Raleigh skyline.

Throughout the design process, architects from Clearscapes sought public feedback on the aesthetics and amenities. The firm strove to honor the City’s railroad heritage while looking at how other cities have reused warehouses. Planners envision a vibrant, active and economically viable space that benefits rail passengers and creates a new Downtown destination. Upon full-build-out, Raleigh Union Station will serve as a transportation hub for local and regional commuter and passenger rail, buses, taxis, bicyclists and pedestrians.

On September 9, the final public information session at the Contemporary Art Museum gave people a last chance to look at the designs and scope of the project and ask questions of the designers.

“Creating great public spaces, both interior and exterior, are significant goals for this project,” said Steve Schuster, the designer of the project for Clearscapes, PA. “That is very much in line with having this facility be authentic, memorable, and unique. We were very pleased when the national Amtrak architect spent the day with us reviewing the project and remarked at the end of the day that the Raleigh Union Station is, in his view, the most exciting rail station project happening in the nation.”

In 2012, Raleigh’s Amtrak Station served 164,000 passengers, making it one of the busiest Amtrak stations in the southeast. But the location and size of the current train station cannot accommodate the expected increases in ridership. Additionally, the current station only has 1,800 square feet of passenger waiting space and only 54 parking spaces.

“This design solves a lot of longstanding problems associated with this large railroad junction, and does so in a way that creates new opportunities,” said City of Raleigh Planning Director Ken Bowers. “The design respects and builds on what’s special about the warehouse district. The reuse of existing industrial building will result in a unique and dramatic space. The echoes of the area’s rail and industrial heritage are reflected throughout the design. The new plaza creates a signature open space at the terminus of Martin Street that will serve as a focal point for a growing arts and innovation district, and connect pedestrians into the Downtown core. The result will be a gathering place that will be a magnet for not just travelers but also area residents, workers and visitors.”