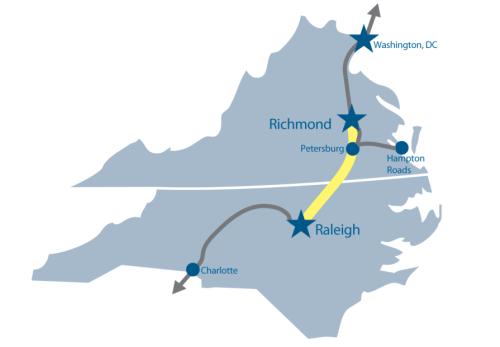 First, let’s start off with the city’s press release:

The North Carolina Department of Transportation (NCDOT) and the Virginia Department of Rail and Public Transportation (DRPT) have released a report recommending to the Federal Railroad Administration (FRA) the preferred rail alternative for each of the 26 sections of the Southeast High Speed Rail (SEHSR) corridor between Richmond, Va. and Raleigh, N.C. (R2R).

The report alternatives are based on considerations concerning the human and natural environment, costs, and operability/constructability. Also considered were the public, local government, and agency comments received following the May 2010 publication of the SEHSR Tier II Draft Environmental Impact Statement (DEIS) for the R2R portion of the SEHSR. Eight public hearings were held in July 2010 to provide information on the alternatives and obtain public input, and several alternatives have been redesigned based on comments received from the public.

Once approved by FRA, the preferred alternatives will be presented in the forthcoming Tier II Final Environmental Impact Statement (FEIS), anticipated to be published in early 2013, followed by a Record of Decision from the FRA and a second round of public hearings.

The SEHSR project proposes to implement approximately 162 miles of high speed rail as part of an overall plan to extend high speed passenger rail service from the Northeast Corridor (Boston, Mass. to Washington, D.C.) southward through Virginia to Charlotte, N.C. and Florida.

A lengthy process but another milestone achieved in this plan to better connect North Carolina’s cities to Richmond and points north. For more posts about the Southeast High-Speed Rail project and how it relates to downtown Raleigh, dive into the archives tagged SEHSR.

Looking at the draft recommendation report, there are sections that go over the public hearings that took place starting in 2010 as well as an overview of the comments received. I pulled two of the charts from the report and have them below. 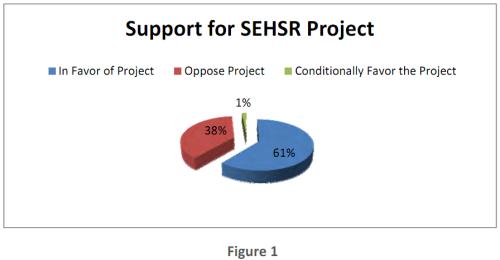 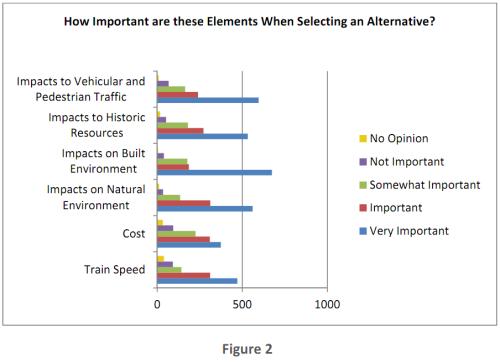 There are a couple of interesting points in the second figure. The exact numbers aren’t provided so based on the graph we have:

Without deeper surveys, the results can be interpreted in different ways so take it for what it’s worth.

Continuing through, the document then explores each of the twenty-six sections of the route with an overview of alternatives and the final pick of the preferred route for this section. The North Raleigh to Downtown Raleigh piece is the last section mentioned, section V.

The report recommends the NC5 Alternative. We’ve analyzed the NC5 plan back in September 2011 when it was announced. From the document:

The recommended preferred alternative in Section V is Alternative NC5.  This decision is based on the fact that it minimizes impacts to neighborhoods, freight operations, and historic resources, and was endorsed by the Raleigh City Council on October 4, 2011.  Exhibit 56 shows that NC5 has the least impacts to streams, no residential relocations, fewer business relocations compared to NC3 (but greater than NC1 and NC2), and only one severely impacted noise receptor (compared to 40 for the other alternatives). Additionally, apart from the impact to the historic Raleigh and Gaston Railroad Corridor that is common among all alternatives, Alternative NC5 has no additional impacts to historic resources.  Each of the other alternatives (NC1, NC2, and NC3) would have an adverse effect on at least one resource protected under Section 106 of the NHPA, and also require a Section 4(f) use of those properties.

To see the figures and maps, as well as information on each section, download the report.