Tonight is the public hearing for the Southeast High Speed Rail (SEHSR) Tier II environmental study. In short, this study breaks up the rail path from downtown Raleigh to Richmond, Virginia into subsections. Most subsections have a few alternate plans and tonight’s event is an opportunity for you to comment on them. The event starts at 5:00pm and anyone will be able to leave feedback or ask questions about any part of the rail line. At 7:00pm, several people will speak about the project and present material to the attendants. Here’s the event info:

Read more about the event at SEHSR.org

We have already discussed the planned options on the table relating to downtown Raleigh so in preparation for tonight’s hearing, here are two thoughts to add.

The closing, or “retirement” in NCDOT’s words, of Jones Street at the rail crossing should be the hot topic between downtowners. One option, the CSX corridor option, proposes elevating the street over the tracks. This means that from Boylan to about Harrington, Jones would be raised off the ground. To help paint that picture, imagine the top of the street being as high as the roof of the building 518 West is in. That would mean that the next time Google Street view updates its images, this view would be a good 20 to 25 feet higher.

Let it sink in.

I’ve read the reports and walked the area, this option just does not seem to click with me. Whoever drew up this idea must not live or work in downtown. They had to of visited in a car, surveyed the area in a car, and its possible they sleep in one every night. Even if built, someone driving on Glenwood Avenue would have to turn off Glenwood, turn at Boylan Avenue, and then turn onto Jones Street in order to cross the tracks. There won’t be an on ramp put up to get you from Glenwood to Jones Street.

So the new Jones Street would further ruin the grid-like structure we have near the south end of Glenwood South, making it a little more confusing to navigate by car, pedestrian and bike access would be limited, and the Jones/Glenwood intersection would not be aesthetically pleasing. It may also create more car traffic on Boylan Avenue, which is lined with single family homes and this may lower the desirability for people to live here.

The planners say that throwing Jones Street into the air over the tracks is to maintain connectivity of Glenwood South to the rest of downtown. The CSX plan also closes Harrington and West where the tracks cross so this would help keep the area isolated. In my opinion this is the most invasive option. I wish I had numbers for this but in my opinion, cars mostly run up and down West and Harrington while pedestrians mostly cross the tracks at Jones. The closings and the elevated street would cut off the primary users.

If you can’t go over, go under

One idea that many are not talking about is the idea of burying the train. Immediately people snap back about how expensive it is and that it will probably flood during the 200 hurricanes we get each year. Also, the politics behind getting this done are out of Raleigh’s league. We’ll get to this shortly.

Five Points residents are really interested to see what happens to the Fairview Road train crossing. If the Norfolk-Southern option is chosen, this crossing would be closed. Why hasn’t the option to run the trains under this road been explored?

Looking at a map, the train would roll into town from the north and go under Wake Forest Road, like it does today. They would then turn and head through the Norfolk-Southern rail yards before hitting Fairview Road. This is where the train could ramp underground, go under Fairview, under Wade Avenue, under Peace Street, Johnson, Tucker, North, and Jones Street. It would finally pull into Union Station by Hargett Street at a lower elevation. 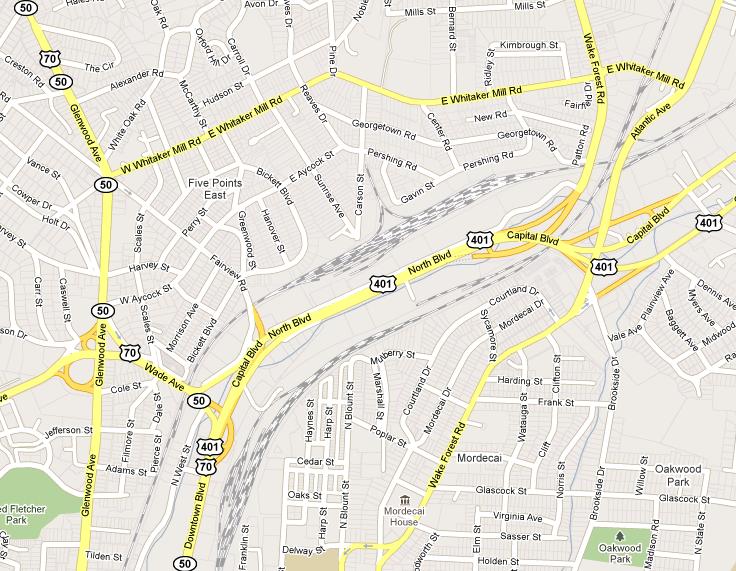 The benefits of this option is that there would be no disruption to the current street layout, except during construction most likely. The train would go into Union Station at a much lower elevation but so what, Union Station hasn’t been designed yet! Also when the train continues west to Cary, it has all that room by NC State to ramp up back to grade level. No street closures, no train noise, no problems.

But with all the pros comes the cons.

The cost of this idea would easily be many times more then anything currently on the table. I would be a little nervous about going with the most expensive option. However, I’m the guy that spends a little extra to buy the quality brand in order to get more in the long run.

One could make the argument that running the train underground and not disrupting the growing entertainment and residential district would pay off in the long run. Union Station may spur lots of development in Glenwood South, maybe much more if streets are not closed and Jones Street is not elevated. Development on existing infrastructure is also great. That’s more tax dollars for the city brought in by visitors on the train.

If obstacles are placed in Glenwood South, the hassle may hurt. A less walkable district could lower the amount of condos being built in the future. A less accessible entertainment district may result in less conventions being booked. A confusing street grid may bring less visitors from around the Triangle, who arrive by car, and these mobile visitors can easily go elsewhere with their thirst, hunger, and money.

The politics behind modifying the Norfolk-Southern lines here, I’m guessing, would be a huge undertaking and those in the know are probably laughing while reading this. It is definitely not in Norfolk-Southern’s interest, just running it in their corridor has them upset, as was the intent of a meeting near Five Points this past Saturday.

Does Raleigh have what it takes to get the high-speed train to run the way it wants or will we approve whatever option has the least resistance?

And why is this “non-disruptive”, as far as I know, option not even on the table? Yes, I know it would be expensive but to not even present it to us, the citizens, is bad a service to us, the ones that walk the streets around here.

It’s obvious I have given this a lot of thought and I think it is a much bigger deal then people think. I’m behind all the support for a beefed up train network in this country and would love to see Raleigh as the gateway to the south with the new high-speed rail line.

These transit events, if like others, are great for getting questions answered and just having conversations with the experts about what the plans are and what ideas have been thrown around. I encourage everyone to weigh in with their opinions, not here on the blog but on the SEHSR website. Here is a link to their survey where you can tell them what you think.