We’re crawling along slowly on this high-speed rail thing. The Tier II Draft Environmental Impact Statement (DEIS) of the Southeast Hish Speed Rail Corridor is now available for public comment. This particular statement focuses on the section of rail lines that will run from Raleigh to Richmond, Virginia. From SEHSR.org:

This Tier II DEIS evaluates detailed study alternatives within this preferred corridor between Richmond and Raleigh In the Tier II DEIS, the project corridor is divided into 26 sections. There are three alternatives in each section, and each rail alternative includes an associated set of highway improvements.

The point of this public comment period is for everyone living in the affected counties to look at the proposed rail paths and provide feedback to the planners. There are open events along the route throughout July. Most RalCon readers will probably be concerned with the Wake County event, which is on Monday July 26th, from 5-7pm. As always, the SEHSR website is always up and open for comments from now until August 30th. Maps are available for each section from here to Richmond with the proposed plans for the rail line.

The route in Raleigh starts at the Boylan Wye in the warehouse district. The maps showing this are available on the SEHSR site here. There are two proposals that show very different paths for trains heading north out of the wye and I’d like to focus on those in this post.

There’s good additional reading from Bruce Siceloff, who sums it up nicely with this piece in the N&O. Siceloff writes:

Should the trains follow Norfolk Southern tracks north from Jones Street along the west side of Capital Boulevard to Wake Forest Road? Or should they go along Capital’s east side, using CSX tracks? 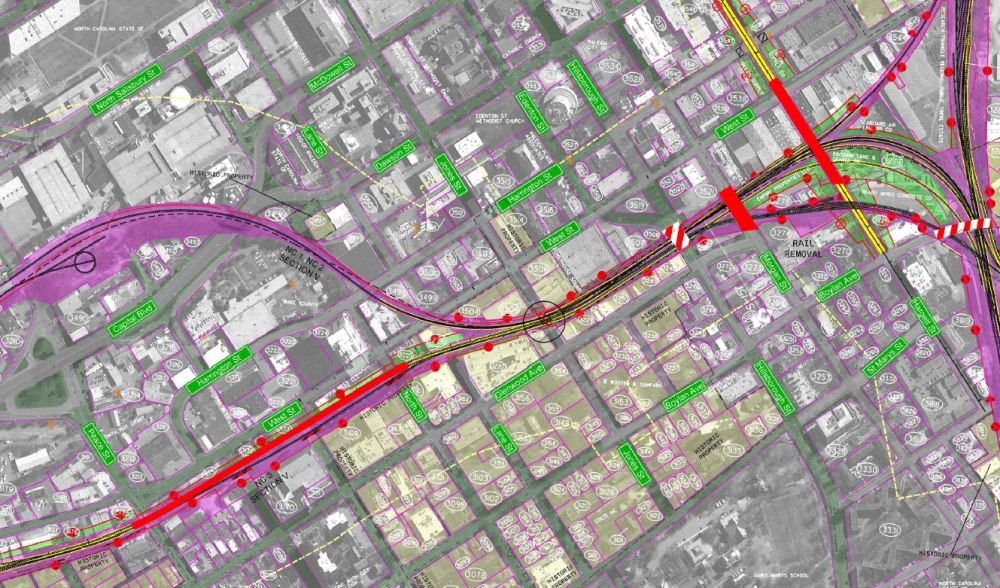 Simply put, this option would run the trains behind The Hue condo building and along the elevated tracks that go over North, Tucker, Johnson, and Peace Streets in the Glenwood South area. The train would head north along the west side of Capital Blvd and out of town.

A major drawback to this plan would be the result of having Jones street closed to traffic. Yes, completely closed and a dead end would await you when you pull up to Natty Greene’s. This is also the more expensive option. 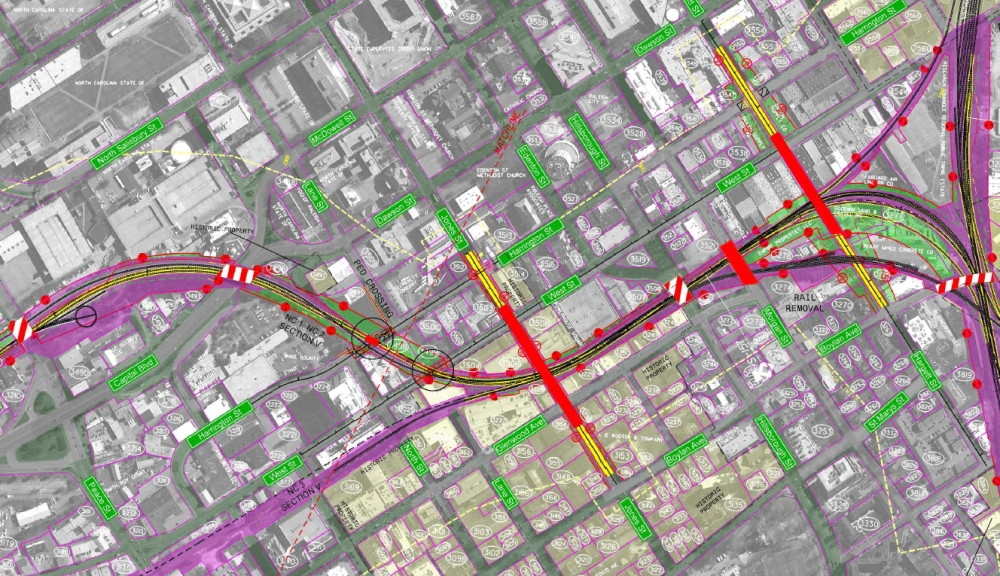 This option bends the train a little and makes it head north on the east side of Capital Blvd. To get over to the other side, the train would cross Jones Street, just like the previous proposal, cross West and Harrington Streets where it would then cruise over the already built bridge over Capital and then take off north out of the city.

This plan would result in the closing of West and Harrington Streets where the tracks cross. Jones Street would also be elevated to cross over the tracks.

According to Siceloff’s article, the city opposes the CSX option, which makes me happy. From his article:

The CSX route proposal would require a new bridge to elevate Jones at least 25 feet over the tracks – and over Glenwood and West streets nearby.

I had to read that one three times before it sank in. A bridge spanning almost an entire city block is not what I support for Glenwood South. Metal and concrete rising 25 feet in the air will destroy the beautiful character that the old electric company building brings to that section of Jones Street. It would also wipe out any pedestrian activity here and would be a huge blow to the massive amount of nightlife that takes place.

The Norfolk Southern route is what I will support but with a few comments about the closing of Jones Street completely. Obviously, I don’t want a bridge for cars to cross but zero access across Jones Street is not acceptable either. What the city could explore is the idea of an attractive pedestrian bridge over the railroad tracks. The dead end sections of Jones Street on either side are not needed also and a beautification study can be taken on. Two plazas on either sides of the tracks would be a really unique thing for downtown and would only encourage more pedestrian activity in the area.

Those are just my thoughts but make sure to get yours in on the SEHSR’s website or at the open house on July 26th.