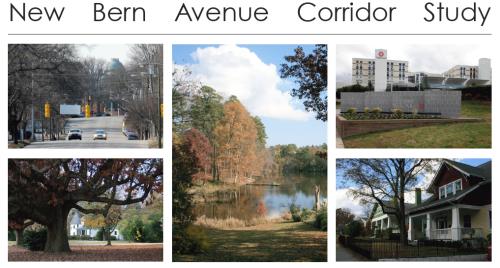 The New Bern Avenue Corridor study has been going on for over a year and the final draft report is now available. You can view it on the City of Raleigh’s study page here. The twenty-seven page pdf goes through all the issues of this corridor and lists recommended actions to take in order to improve the study area. The city is looking for comments about it so get them in before January 2. Here’s how.

One piece of the corridor study that I commented on was the bicycle lanes. The study recommends a new street layout. Picture of that below.

The one-way streets of Edenton and New Bern are laid out, going left to right, with two vehicle lanes, a five foot bicycle lane, and an eight foot vehicle parking lane. The two way section of New Bern has a similar layout on both sides with a median in the center.

This layout irked me a bit after seeing it so after some thought I did some research and commented on the plan. Here is what I sent in:

Great work on the final draft of the study. I did want to pass along some comments of mine as I read through the report, specifically about the bicycle lanes.I hope that the city can consider an upgraded plan for cycling along this corridor to be implemented either with this New Bern vision or at some later time when funding becomes available.

The plan in the report shows that a cyclist can ride in a five foot wide travel lane with parked cars to the riders’ right and moving traffic to the riders’ left. In this layout, a cyclist is at risk of injury with cars entering/exiting parking spaces as well as at risk of being “doored” by unaware drivers exiting their vehicles. Buses will also stop within the bicycle lane in order to drop off and/or pick up new riders at bus stops. Since the New Bern Corridor has the highest ridership of any Capital Area Transit (CAT) bus, the chances for this to happen is high especially in the coming years if transit grows in Raleigh.

I propose the city consider an upgraded cycling transit plan for the New Bern Avenue Corridor where bicycles can flow with equal ease as nearby buses and cars on the road and pedestrians on the sidewalk. The five foot bicycle lane should be swapped with the eight foot car parking lane. The bicycle lane should then be protected with barriers so that cars cannot interfere with bicycle flow in that lane. A picture of what I mean can be seen here:

Clearly, other modifications are needed to make the bicycle lane flow smoothly through intersections and bus stops. The planned bus stop bump outs should then be modified into “island” platforms where waiting riders can step onto the bus at the same floor level. This helps the ease of entering/exiting passengers, especially wheelchair riders, and helps make any future bus rapid transit (BRT) or streetcar system flow much more smoothly. A picture of a bus platform with a bike lane around it can be seen here:

Regarding conflicts with bicycles crossing an intersection and vehicles making right turns, more research needs to be done on a way to have both parties yield correctly to avoid any nasty incidents. Other cities have found ways to accomplish this and I’m sure Raleigh can implement it as well.

I really think there is an opportunity for cycling in Raleigh to continue to grow with changes like these. If something like this existed from downtown all the way to WakeMed, a distance of three miles, then I think this corridor would be a truly mixed use transit corridor and spur lots of the great development that many participants in the study area asked for. This would allow for people to get around in many ways and helps preserve the neighborhood character on both sides by keeping the area at a more human scale.

Hope to see something like this in the future. Thanks a lot.

So the dedicated bicycle lane in the recommended plan may not really improve things for cyclists then the current layout of New Bern Avenue and Edenton Streets. In my opinion, the current layout of three, and in some places four, travel lanes with no parking spaces allows a cyclist to move down the street more safely. Cyclists can travel with the curb to their right and plenty of space on their left for cars and buses to pass. The recommended layout with the bicycle lanes may force encounters between cyclists and cars parking as well as buses making their stops.

I think if Raleigh was really serious in building cycling infrastructure, the New Bern Avenue corridor needs more study on this topic. I hate to see similar problems in this area to the ones on Hillsborough Street’s bicycle lanes. If anyone has more knowledge on the topic, I’d love to hear your thoughts on this.