Tomorrow is an interesting day for transit fans as Durham County steps up to tax themselves in order to bring upgrades to our region’s transit. A one-half cent sales tax increase will be on the ballot in order to make these things happen. Readers should pay close attention because Raleigh’s close buddy may be bringing some goods to this symbiotic metropolitan partnership.

The informative website Our Transit Future (OTF) has documents aplenty to read up on but in case you haven’t gone through them, I’d like to attempt to summarize some of the things that may benefit Downtown Raleigh in the near future if Durham voters approve the tax increase. The documents there describe future stations, timetables, expected ridership, and other facts that could come into reality in the Triangle within the next decade.

Clearly, this blog supports the upgrade of transit in the Triangle and I hope that this tax is passed in Durham County. Let’s see what aspects of the plan may have an impact on downtown.

The Durham County transit plan will go towards the following Raleigh related improvements, according to the fact sheets listed on the OTF site:

Step 2 – Rail from Durham to RTP and Raleigh

Here’s a map of the commuter rail line planned for the Triangle going from West Durham to Greenfield Parkway, Garner. 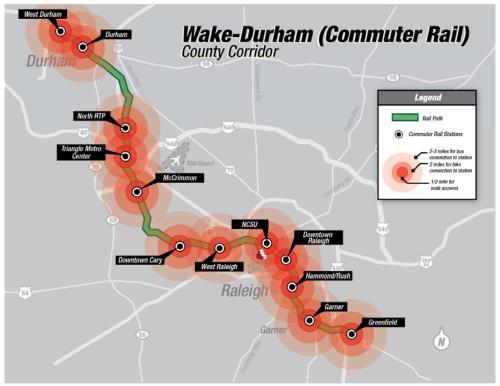 The different technology choices for the Durham to Chapel Hill and Durham to RTP and Raleigh rail systems were chosen to best respond to the characteristics of the travel markets in each corridor.

Durham to Chapel Hill Light Rail: This 17-mile corridor already has high traffic, a demand for transit and features three travel markets that include all-day trips and many short trips:

Additionally, the corridor features significant special event attractions such as DPAC, Brightleaf Square, Ninth Street, and UNC Dean Dome. Some of the most-densely populated census tracts in the Triangle including UNC’s main campus and Duke’s east campus are within a short walk to rail stations. This rail corridor is also well-positioned to capture the already-existing 3,000 to 4,000 daily bus transit riders from points east traveling to UNC via park and ride and Triangle Transit services such as bus 805 in Woodcroft in South Durham.

The corridor features considerable work trips but comparatively less non-work trips than the Durham-Chapel Hill corridor. There is existing heavy transit demand for NCSU, and considerable transit demand for employment trips to downtown Raleigh. These long transit trips remove large amounts of vehicle miles traveled from regional highways, and
the higher average speed of commuter rail over great distances makes it the ideal technology to attract motorists out of their cars with speeds that will most likely be unachievable by car during rush hour in the future.

The documents also predict a daily ridership of 7,000 boardings per day between Raleigh and Durham.

Outside of the documents that revolve around the tax increase and transit investment plan are others that focus on the three transit corridors with much more details. (up to date as of July 2011) Those three are:

While the Wake Corridor information impacts downtown Raleigh more, tomorrow’s vote in Durham will most likely help some of the plans documented at the Durham-Wake Corridor link more. Having said that, I’ll focus only on the documents at that link and save the Wake Corridor for another time. (maybe when Wake votes for transit improvements next year?) 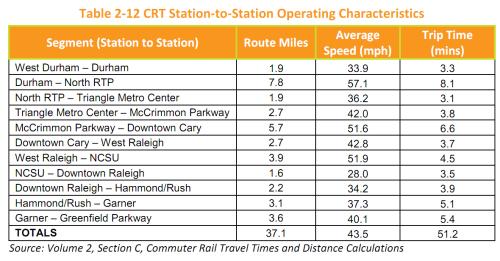 This table breaks down the 51 minute end-to-end trip time so with it we can predict how long it will take to get to and from popular locations.

FYI, the North RTP station is approximately located near the intersection of Miami Boulevard and Cornwallis Road.

While weekend service is not planned, weekday service hours of commuter rail could look like what is described in this table. 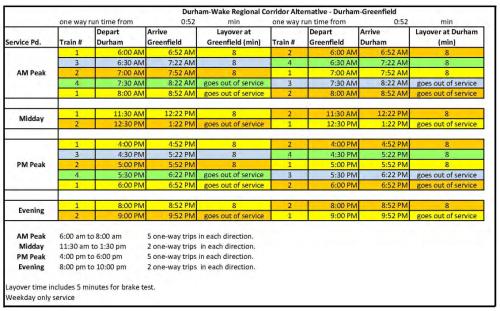 If you are a map person and would like to view each and every section of the commuter rail line from end-to-end, jump into this 14 MB pdf here. There are also more detailed topography maps available for the entire line at the corridor link.

Below is a proposed platform layout for the downtown Raleigh station followed by an example of how other stations might look. The downtown platform would sit between the two tracks rather than having two side platforms. 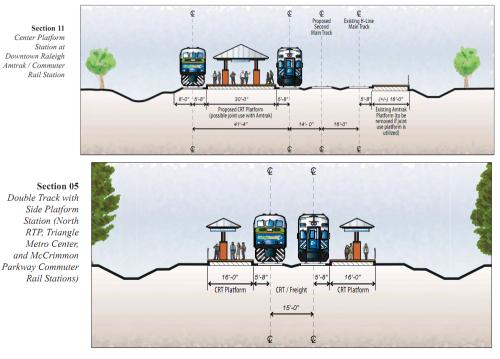 Last, I’ve posted what I think is the most interesting table in all of the documents. Here are the projected ridership numbers from station to station. The table is packed so make sure and click the image to view it larger.

According to the table above, the most trafficked stations will be Downtown Cary, Downtown Raleigh, and NCSU, in that order. You can see that most of the traffic comes between Downtown Cary and to either NCSU or Downtown Raleigh. I feel this is predicting a future scenario where commuters park and ride into Raleigh.

To dissect the downtown Raleigh numbers even further, we’ll start with the 825 arrivals and 1,140 departures figures in the table. There are assumptions that about 15% of trips will be ones that do not involve a person’s home. Thinking about these numbers, this has to explain the difference of 315 between arrivals and departures. (do the math) So an educated guess as to a person’s non-home based trip would be something like leaving downtown to go to the airport for example.

So how can we have more people leave then show up each day? This is what I need to explore more as the numbers suggest that in some cases people will be arriving in downtown using some other method but leaving on the commuter rail lines. If anyone has any information on this I would most appreciate an insight to this.