For those who want more green buildings around downtown Raleigh, sadly the condos at 615 West Peace Street will not be working out for you. The building is getting closer to completion and bricks should be going up as you are reading this post.

Condo buildings like this are a rare specimen these days. It might be worth checking back in and seeing how it did in the end once it opens up later this year or next.

Our photographers from the Community really know how to show off downtown Raleigh. This photo from a drone shows the progress of 615 Peace, a new condo building going up at 615 West Peace Street. Their website shows that over half the units have sold which is great to see.

Hopefully by this time next year, we’ll be eyeing the ground-floor retail spaces for new eats or shops.

Land has been cleared at 615 West Peace Street, not to be confused with 615 East Peace Street, for a building named 615 Peace. The mixed-use building will bring residential units over retail space. You can see a rendering of the building in this September 2020 post.

Peace Street has been through a lot over the last few years. The Capital Boulevard bridge is structurally finished and now we’re waiting for the decorative elements to be completed. As part of that project, the street was widened a bit and reconfigured. I think it took almost 3 years of construction to complete it. In the future, Smoky Hollow will add a lot and a new park at Devereux Meadow, more on that in the coming weeks, will bring accessible greenspace to the street.

I believe it’s been shelved but a streetscape plan for the western side of Peace Street would really add some nice elements here. The thought of even more construction though might irritate some neighbors but that’s the way it goes I feel. Bring it on.

The latest iteration for the property at 615 West Peace Street is now a residential building named 615 Peace. One and two bedroom units are planned for an empty site that has gone through a few proposals over time, including a hotel with a controversial rezoning.

The project’s site also mentions ground-floor retail which is refreshing to see on a busy street like Peace. The plans look pretty decent so I’m hoping the condo market makes it happen as rentals still seem to dominate downtown.

Discussion continues over a potential new development on Peace Street where a developer wants to build a boutique hotel. 615 West Peace Street, mentioned on the blog before, is zoned for 3-stories but after an initial application of 5-stories, negotiation with neighbors have dropped it to 4.

Shown above is the public hearing around this issue that took place this week and I think it’s important for readers to watch. It gives you a sense of the council on density and rezoning cases.

On a positive note, I actually do think there is a sense of approving this but the council seemed to get into the weeds about the rooftop bar. A lot of the discussion focused on what can be done on a roof and some feel that a 4-story height limit in addition to a rooftop deck is basically the same as a 5-story building.

Here are the highlights if you don’t want to watch the whole thing:

For me, I find myself repeating myself when I say that I want the council to focus on bigger issues but instead are diving into the weeds of each case that’s presented in front of them. I don’t want to go off here but it just seems that if a council meeting wants to spend time on what the railings are going to look like, something is wrong.

Watch the video and decide for yourself. The conversation continues on April 17 as the council voted 7-1 (Stewart opposing) to delay a decision by two weeks. 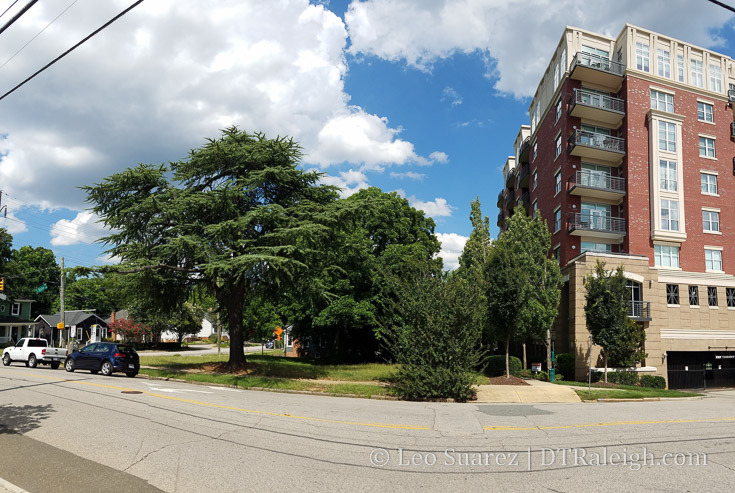 At 615 West Peace Street, a request to rezone the property from 3 to 5 stories is working its way through the system. The developer wants to put a boutique hotel at the corner of Peace and Boylan.

At this point, only the request and information about the required meeting with nearby residents is posted on the city’s website. (see Z-017-17) I’m going to borrow some words from a regular commenter to the blog who was at that meeting.

In their initial pitch last night to neighbors, the developer promises a boutique hotel at that site but wants to exceed the NX-3-UG. The developer’s request came with no plans, elevations, or even design concepts to share. They have made no front-end investment in design services to sell their product but want neighbors to give their blessing to the zoning change to either 5 or 7 floors.

I kind of think that we have a wide gamut of proposed developments out there. Developers need a little salesmanship and need to do their homework regardless if they have a good idea or not. I really liked this article in the N&O comparing the pitches between 301 Hillsborough and 400 Hillsborough, both projects we’ve talked about on the blog.

You can see the reaction to a polished presentation versus the opposite.

It’s early on this project for Peace Street so we’ll see where it goes.