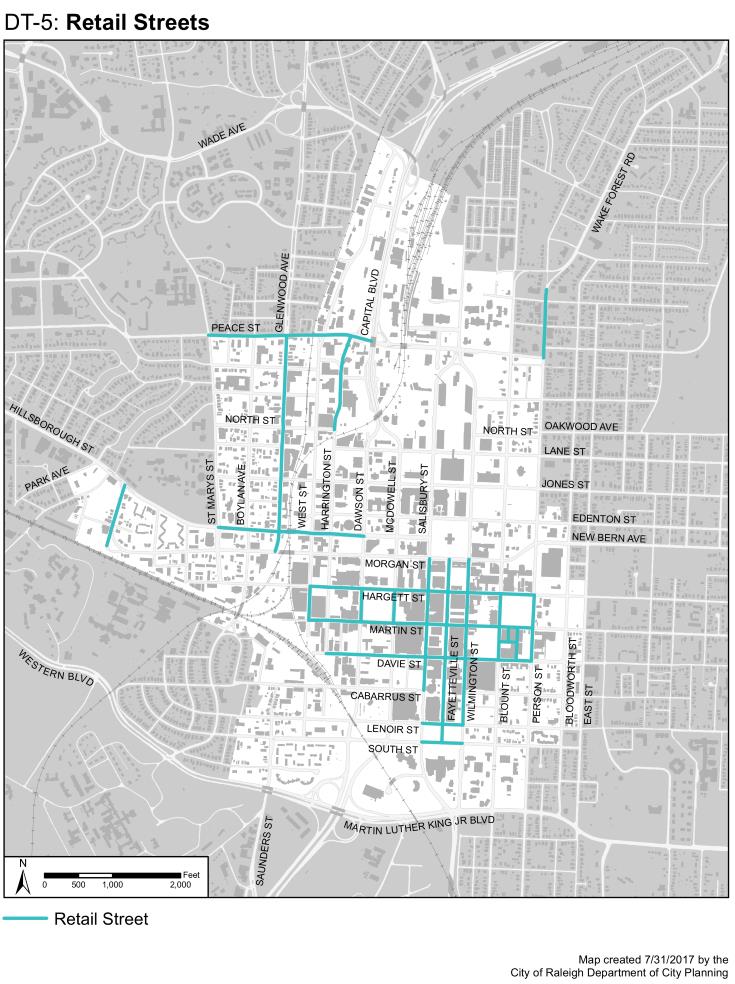 I was perusing through the latest updates for the city’s 2030 Comprehensive Plan when I spotted this beauty of a map. Technically, it’s not new but just a revised (better looking) map of proposed retail streets in downtown Raleigh.

I wanted to post it here for reference. New developments along these identified streets should be encouraged to provide continuous, ground-floor retail and/or active spaces. That’s something to keep in mind for new proposals.

Email readers, this post contains embedded video which you may not see in your inbox. I recommend jumping to the blog to see all the content.

Last week at the Raleigh City Council meeting, a few projects we’ve discussed on the blog were presented and discussed. The council approved the sale of the city-owned lot on Salisbury Street, known as “Site 4”, to Summit Hospitality Group, Ltd who plans to build a hotel. The plans for the new Capital Boulevard bridge over Peace Street were also discussed as construction on that project is planned for Summer 2016. Finally, an update on the 2030 Comprehensive Plan was given by the planning department.

In short, the council approved the sale of Site 4 to Summit Hospitality Group, Ltd to build a Residence Inn hotel. This sale was recommended by the Budget and Economic Development Committee last month and now makes it final.

From the city’s press release:

Following a Feb. 18 Public Hearing, the Raleigh City Council approved the sale of .52 acres on South Salisbury Street, between South Street and Lenoir Street, to Raleigh-based Summit Hospitality Group, Ltd. Approval of the $1.73 million deal will result in the construction of an 11-story Marriott Residence Inn with 140 to 154 additional rooms within walking distance of the Raleigh Convention Center. The site is also known as Site 4 and is considered to be “one of the most important infill sites within the Convention and Cultural District” in the City’s South End Master Plan.

For more details on this project, jump to a recent post with all the details.

The Capital Boulevard bridge over Peace Street is slated for replacement in the next few years and designs have been in the works for quite awhile. The latest on this topic is covered in good detail in the post linked below, including some excellent conversation by readers.

Between the “base” alternative (cheaper) and the “enhanced” alternative (costlier) this is where the city has to step up. There is strong public support for the enhanced alternative but the feds only have enough money for the base alternative.

According to the presentation, in May 2014 an alternative will be chosen with construction planned for Summer of 2016.

From the city’s press release:

Each bridge is proposed for replacement under the Federal Highway Administration’s bridge replacement program. City staff has coordinated the replacement of these bridges with NCDOT to be consistent with the City’s adopted Capital Boulevard Corridor Plan. In each case, NCDOT has developed base alternatives that rebuild each interchange following the existing configuration, and enhanced alternatives that more closely follow the City’s corridor plan recommendations. In order to pursue the enhanced alternatives at either location, the City would be required to pay for the difference in cost above each base alternative.

The 2014 Progress Report was presented to council and can be found on the city’s website. Some highlights from the presentation:

The newest emerging trends that city staff will be studying are: