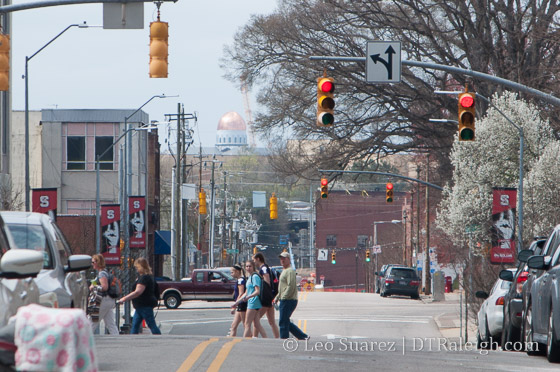 I was walking down Fayetteville Street recently on a gorgeous Spring afternoon. On this particular day, a Saturday with no major events taking place, people were wandering the sidewalks enjoying the same comfortable weather. I’ve done the walk thousands of times but it was when I noticed a small, new detail that refreshed my perspective and sense of where I was just a tiny, little bit more.

I was crossing Martin Street and to my right, way in the distance, I could see the newly placed dome of the large Catholic church being built to the west of downtown. For a quick second, I had a new perspective of where downtown was located in relation to other areas of my city.

This has nothing to do with the church itself, I’m not a very religious person. It’s the idea of being able to view, in the distance, other parts of our city that gave me a sense of place in relation to other places in Raleigh.

I want to think this feeling is an aspect of the term “sense of place.” (or at least that’s how I interpret it)

The same could be said of the towers in North Hills as you cross Dawson Street. When walking, I always look north up Dawson and can see where North Hills is located.

On Peace Street, you can see the apartments at Cameron Village.

There may be more examples of this but I thought it was cool to kind of reflect on what downtown is also a part of. We follow what is happening in downtown but while out walking, it is nice to see (literally) the city we’re a part of taking shape around us.

I feel like these are little details that make it special to be in downtown Raleigh.