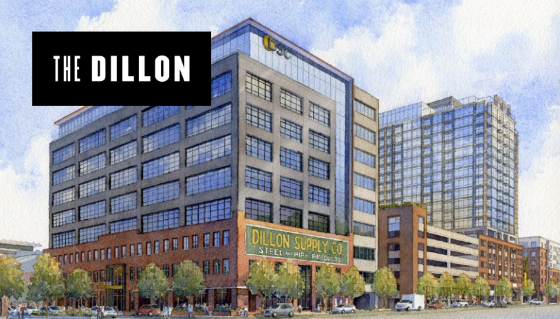 Preliminary rendering of The Dillon, released in June 2015

Last week, site plans for The Dillon were submitted to the city and posted on their website. You can dive into it yourself here (when I looked, it was incorrectly spelled “dillion”) or follow along with the highlights below.

Some quick background first. The Dillon is a two building project in the warehouse district. It combines multiple properties that will result in an all-block building plus a smaller building across the street. The all-block building will consist of the Dillon Supply Company warehouse located between Martin/Hargett and West/Harrington Street and the surface parking lot on the northern end of the block. The smaller building will be to the north, across Hargett Street and will replace the surface parking lot.

Here’s a map that shows the location. 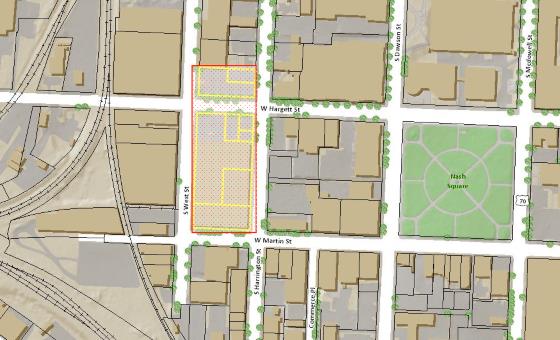 The mixed-use project (both buildings) will consist of office, ground-floor retail, and residential. Here are the key takeaways from this site plan submission:

Ground floor retail was a big discussion point in the earlier rezoning cases for this project. I took a screenshot of the preliminary site plan and filled in the ground-floor retail spaces in red to give us an idea of how much sidewalk space will be going to retail. 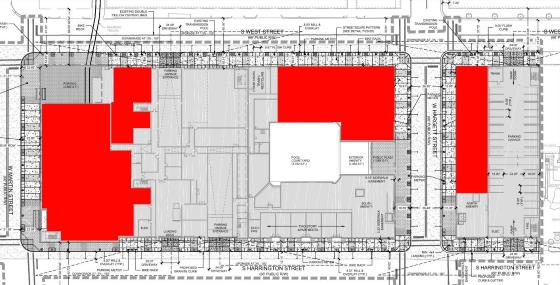 My first reaction is that there isn’t enough retail space. However, you could almost argue against it when you consider a few things.

I’ll admit that some spaces in this site plan aren’t labeled, or not labeled clear enough, so there COULD be more retail space but I just can’t see it at this time.

We’ll see how the discussion goes as if The Dillon provides enough retail space for the warehouse district. It certainly is much, much more than the zero square feet we have today in that location.

Another interesting tidbit I found on the city’s website was a request for an amendment to the stepback requirements:

The current stepback requirements for building massing standards requires a 15′-0 stepback between the 3rd and 7th story for all street frontages. A different configuration for this project is proposed that includes more significant stepbacks on the north and south with not stepping back on the east and west as well as stepping back after the 8th story. The massing solution proposed meets the intent of the regulations by providing more access to light and air at the street level, mitigating wind impacts, maintaining a consistent street scale, and visually reducing the perceived scale of the building.

Or better, you can see the sketch below. 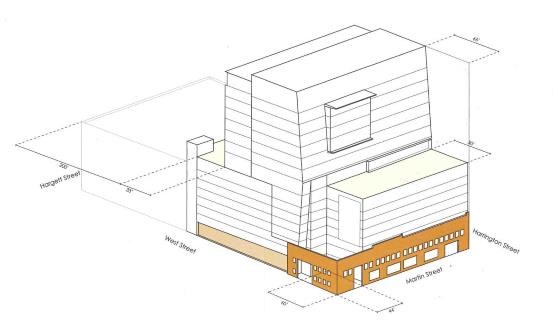 You can get a sense of how the main building steps back as it rises up, hiding its height along Martin Street but still showing vertical along West and Harrington Streets.

The portico on the corner of West and Martin Streets may be considered the “main” entrance to the building as it will face the future Raleigh Union Station. Travelers that are still using a car are most likely going through this corner in-between the parking deck and the station.

Lastly, the retail spaces being mainly positioned along West and Martin Street do help extend the pedestrian and retail corridors that are in their infant stages along these streets. This is a recommendation from the Downtown Plan and should be kept this way with more utility or residential along West and Harrington Streets.

It will be fun to watch this one up until construction starts.