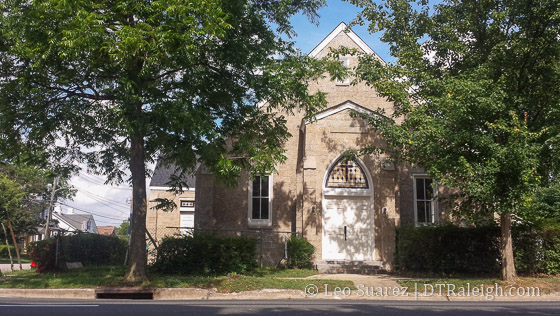 The building at 501 South Person Street has been under heavy renovation.

I love seeing building reuse stories and this one has really piqued my interest.

The building located at the corner of Cabarrus and Person Street is done, or nearly done, with its renovation and the owner, Phuc Tran, wants to put a restaurant here. The blocker from starting work on the restaurant is zoning as the lot is currently zoned for Residential Business (RB) and Mr. Tran wants it to be Downtown Mixed Use. (DX) The DX zoning would allow him to open a restaurant that serves alcohol.

For a great catch-up on the issue, check out the story on the Raleigh Public Record.

Since 1922, the site had been home to a Seventh-day Adventist church. They continued to use the facility until the 1980s, by which time the congregation had outgrown the facilities. After that, it had been the place of worship for other churches, but when the building was damaged by a tornado in 2011, the church was abandoned. Scheduled for demolition, Phuc Tran stepped in and repaired the church.

Speaking at the meeting, several members of the audience said their primary concern was the selling of alcohol and that litter might become a problem because of the restaurant.

Even though the Raleigh Planning Commission voted in favor of the rezoning, the Raleigh City Council still has to approve it. That vote came up recently, on June 2, 2015, and was delayed after some discussion. Here’s the video of it which also includes some great photos of the renovation work and interior of the building.

If the video doesn’t show for you, watch it here.

No vote was made as it was delayed two weeks because city staff needs to determine the validity of the submitted protest petition. The council should discuss it again at their June 16, 2015 meeting.

The residents immediately around the site came out to voice support or concerns about this rezoning request, as you can hear in the video. (lots of comments by the way)

Those for the rezoning want to see Mr. Tran open a restaurant here. Reasons are that it will bring some vitality to the area and possibly raise property values.

Those against do not want restaurant, especially alcohol related, activity nearby and feel it inappropriate to be near college students (Shaw) and young children of the nearby youth centers. Possible trash, smells, and public drunkenness were other reasons to be against the rezoning. There were also worries that if the rezoning was approved and the owner changed later, what holds the new owner to the same promises as the old one?

In my opinion, there are two way to look at this issue. One is to decouple the restaurant opening and the rezoning case. The other is to see them as linked together.

As far as the rezoning goes, the city’s comprehensive plan and unified development ordinance (UDO) have pretty much included this property into the downtown mixed-use (DX) camp. Actually, the proposed rezoning for that entire area is to be downtown mixed-use zoning. You can verify it with this tool by entering in the address.

The case here is that Mr. Tran wants to have the rezoning now so work can get started on the restaurant and not wait until the new UDO rezoning goes into effect. It’s completely consistent with what the city wants already and city staff confirmed that everything is indeed consistent with all policies. 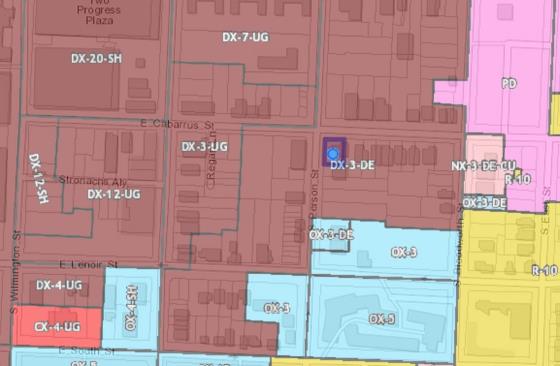 As a rezoning case, this is a no-brainer and the council can point to the adopted policies in order to make a decision. The rezoning should be approved.

One major difference I noticed between those that are for and against the restaurant at 501 South Person is the difference of time each resident has lived in the neighborhood. Those against have decades under their belts of living nearby. Relatively speaking, those for the rezoning are new to the area. I’m generalizing sure but if you watch the video and note the addresses given, the sale dates of the properties of those for the rezoning are less than 15 years compared to those against who claim to have lived in the neighborhood for multiple decades.

I could be wrong but there’s something to this.

East Raleigh doesn’t have experience with a restaurant of this type right in the neighborhood so they have every right to scrutinize. If you look at history, the past few decades have shown very little new businesses in the area so the neighborhood that these residents have grown to love and protect is being challenged by something new.

The new residents most likely came to the area riding on the downtown revitalization wave and of course a new restaurant appeals to them. That is what has been happening around here in case you haven’t noticed.

Another view of the building at 501 South Person Street.

My personal opinion is that a renovated one-story building turned neighborhood restaurant is a much better contributor to any neighborhood than an empty lot or future development. The building, which has been now saved, maintains character and honors those that built the neighborhood in the past.

I think whatever the outcome, a lot of good has taken place with the building being saved. The community, new and veteran residents, should come together and work out the concerns in an open communication instead of coming off as rivals during a government meeting.

In the many more decades to come, the building may evolve to serve more than just the new downtown residents as the nearby culture embraces it. I think that’s the first step and is something worth supporting.