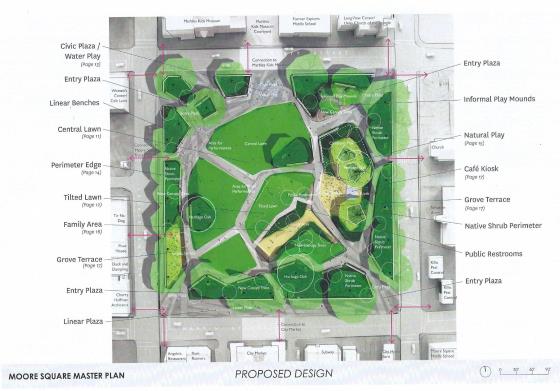 This week, I was invited to participate in the Moore Square Master Plan Public Leadership Group. (PLG) The group consists of individuals from a variety of organizations that may have interests in Moore Square and the upcoming redesign. This included people from the state, the city, neighborhood groups/CACs, and nearby businesses. I was there as a rep from the Raleigh Downtown Living Advocates and just active downtown resident.

The group met at Market Hall and were hosted by the city and Sasaki Associates, the group behind the Downtown Experience Plan. We all discussed the aspects that we were most excited about as well as most concerned about.

Above is the handout that we got and I scanned it in to share here with readers. Those that have been following along should recognize almost all of it as this is the same plan that has been on hold since maybe as far back as 2010.

Uses of the square were discussed, with the intent to gather lots of feedback about what people want to experience in the square so that the design may attempt to accommodate. These activities were broken out into themes as well. They were Food, Health, Learn, Shop, Gather, Art, Relax, and Play.

Activities are more like yoga classes, food carts, history walking tours, or other meetups. More emphasis was put on small-scale, inclusive activities rather than ticketed large-scale events. (something we’re used to seeing now in Moore Square)

Some of the biggest concerns in the proposal from the group were:

The installation of a cafe/kiosk may not even be allowed as the state and/or historic commissions may prohibit permanent structures on the square. If you didn’t know, Moore Square is state-owned land that is leased to the city. If built however, the cafe would be leased out to a private business to operate, similar to the cafe that is in Pullen Park today.

There was an open house yesterday and one tonight but you can still get your comments in about the proposal on this thread over at Your Parks Your Future.

The timeline puts construction taking place in “2016/2017” according to the city’s website project page.