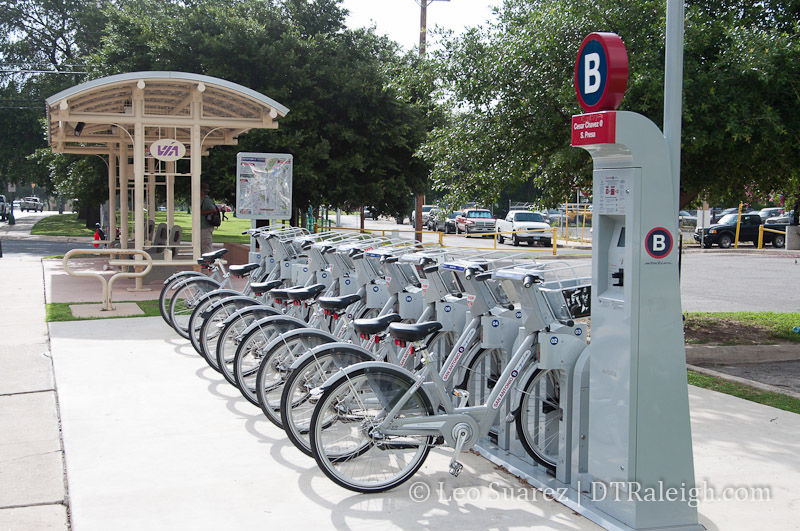 Or will do anyway according to a recent report. I just went through most of the recently released 2014 Raleigh Bike Share Feasibility Study. The conclusion of the study finds that a bike share system in Raleigh is feasible. You can get the study here (pdf) or see it and a lot of other Bike Raleigh information at BikeRaleigh.org.

I decided to go through the study and take some notes.

Executive Summary
If anything, the Executive Summary is worth reading through. At a high level, the study identifies the following benefits of a bike share system for Raleigh:

These findings were based on certain qualities that our city has. This includes a comparatively “high resident density” and “high concentration of employers” near downtown, a “significant tourist market,” and “plans and policies in place focusing on the promotion of livable, walkable, and bicycle friendly places.”

A bike share system in Raleigh is not without its challenges however. Two major obstacles identified are:

Also mentioned as obstacles are a “difficult topography” and “existing development patterns” that promote low population and employment densities outside of downtown.

The first round of cost estimates are mentioned as well. From the report, here’s a table showing approximate startup and operating costs based on national averages. 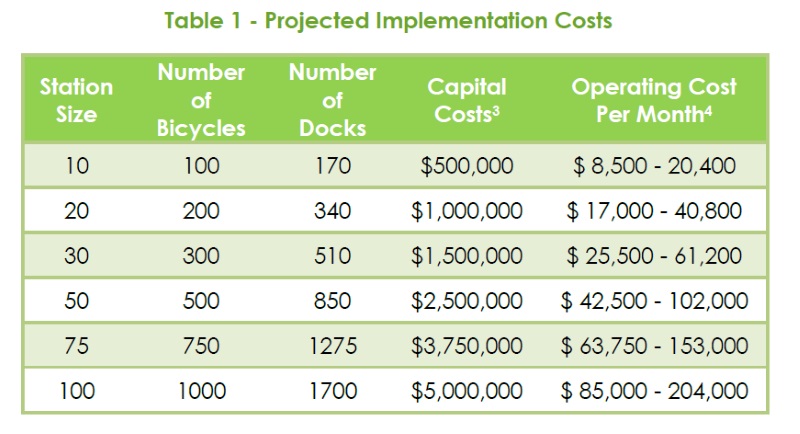 Diving Into The Study
The study is divided into nine sections that start by introducing bike share, what it is and how it has been implemented in other cities, all the way to demand analysis in Raleigh and a final recommendation.

If you are asking yourself, “What is Bike Share?” then I recommend reading pages 4-11 for some background history and fun facts about the service. For example, did you know:

A bike share system can help a community attract and retain residents. Many communities have used bike share systems as an added effort to help (re)vitalize and reactivate their downtown area(s). In addition, it provides a new and different way for tourists to see a city, helping attract more tourists and their spending power to communities.

I won’t go over the basics and benefits of a bike share system in this post. Instead, I’ll recommend checking out the study or reading a June 2013 blog post about my visit to San Antonio and using their bike share system.

Community Analysis
The study starts by taking a look at Raleigh and some of the community features like demographics, physical makeup, and current infrastructure.

Our temperate weather is always listed as a plus. Another plus are some generally flat areas around the core downtown. That’s not to say there aren’t some hills out there. I know Glenwood South is on quite a slant when cycling up and down it.

The City of Raleigh is the second most populous city in the state with approximately 423,000 people living in the city – a density of around 2,800 people per square mile, which is higher than all of the other southeastern bike share cities.

That’s a pretty powerful statistic right there. Here is the comparison between us and other southeastern bike share cities.

The study shows that the population and employment density is most clustered in and around downtown. There are a few pockets of higher density residential in southwest and north Raleigh but downtown really commands the most attention. See the figure below for a heat map of population density in Raleigh.

Analysis was also done on low-income and minority communities. There is a significant overlap between feasible areas for bike share and locations of these communities. This presents an opportunity to provide a low-cost transit option to these residents.

Compliment to Transit?
Here’s probably the biggest challenge and detractor to the feasibility of a bike share system in Raleigh. 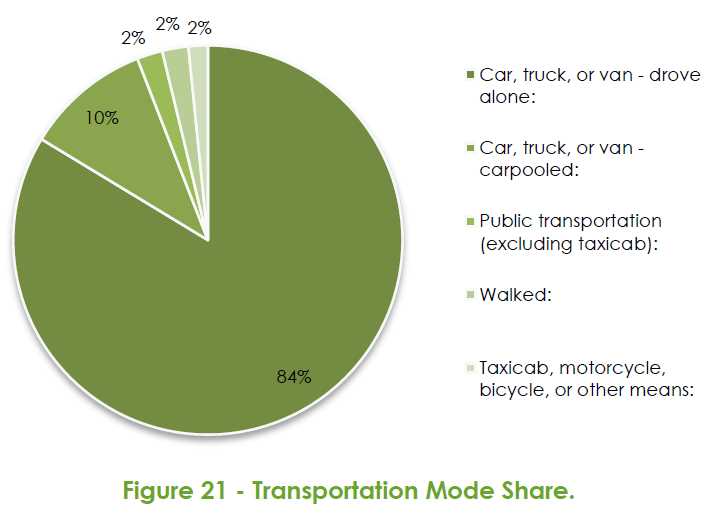 The quote says 79% while the pie chart shows 84%. Unless I’m missing something that might be a typo in the study. Either way, both numbers are pretty high and significantly show Raleigh’s dependency on SOVs.

The only area in the city with a significant amount of proximity to transit, mass transit specifically like Capital Area Transit (CAT), is in downtown. The study points this out as a challenge but lists an opportunity to use bike share to bridge gaps between activity centers that are poorly served by buses.

I think this is the biggest challenge by far for a successful implementation of bike share in Raleigh.

In addition to bus transit, our current bicycle facilities are mentioned. The study recognizes the increase in facilities over the last four years and the city’s commitment to be a “bicycle friendly community.”

However, if you look at the overlap between the areas where bike share is feasible, mainly downtown, and the fact that bike facilities are spread across the city, this leaves much fewer miles to be used within a possible system.

Here’s a point for more discussion. Most bike facilities are actually outside of downtown so to say that bike share can only happen near bike facilities doesn’t quite tell the whole story in my opinion. Downtown streets are naturally friendlier to bicycles so therefore are more fit for bike share. The study points out that there are much less bicycle facilities in downtown as a detriment to a bike share system and I think that could be argued against.

Policy
I’m not going to get into the details of this section but wanted to mention it as I thought it interesting. An identified challenge was that “The permitting process may be complicated due to restrictions on outdoor advertising, historic district designation, right-of-way ownership by multiple government agencies, and specific streetscape plans.”

Complicated indeed. An included flow-chart shows some situations having to go through seven layers of permitting.

Public Engagement
The feasibility study was not without its opportunity for you and I to participate. “Public feedback was gathered using a number of tools including a community workshop, a project website, an online survey, a crowdsourcing map, and interviews with local stakeholders and agencies.”

Surveys showed that 84% of respondents support a bike share program in Raleigh. Opinions, both supportive and of concern, were around the themes of:

To gather more information, an online crowdsourcing map was built so that people could suggest station locations and provide comments. Here’s a map of the 151 stations that were received including a table of the top 10. 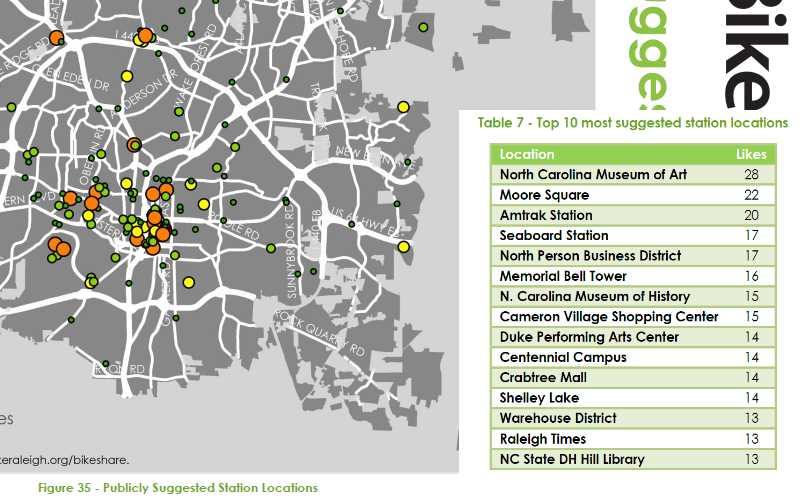 Big Picture Conclusion
The study goes on to explain its methodology behind the recommendations and results as well differences between the types of bike share systems that are out there. Below is a potential bike share heat map as well as a list with final conclusions and recommendations. 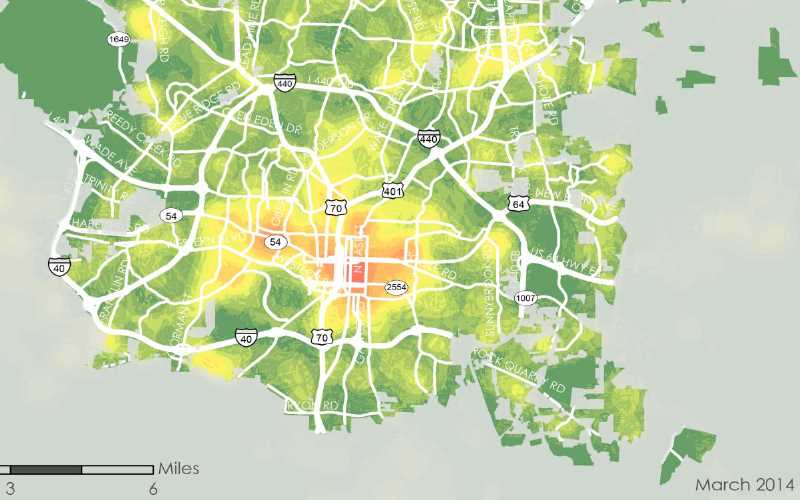