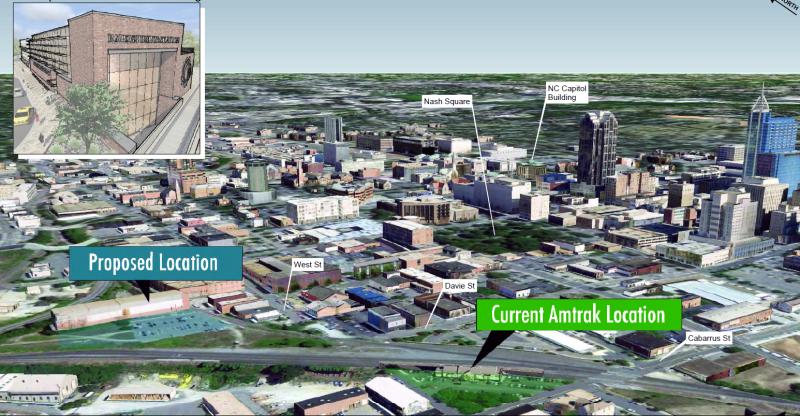 Last night, Raleighites had a chance to hear a presentation about the upcoming Union Station and to comment on some of the high level concepts being drawn up for the new station. This was the first of several meetings to show off the work as it progresses towards a more complete design.

I want to reiterate the fact that this meeting was indeed very high level and nothing concrete has been put into plan. The presenters spent about 30-45 minutes going through slides of the warehouse district and the viaduct building itself. Maps showed very rough concepts that the station will have, things like a mix of gathering space, retail, and operations space.

The presenters emphasized that they wanted the entrance to be grand and inviting. Borrowing from a plethora of examples from around the world, it felt like Raleigh’s Union Station will try to have that big and open-style entrance that others seem to have.

The very first concepts, the ones that have been out way before this meeting, of the station layout are actually being challenged. More emphasis on the gathering space, making it bigger and more voluminous, was shown in the drawings. There also was, what appeared to be, more thought put into the parking lot layout than before.

Here’s the original layout of the station area. 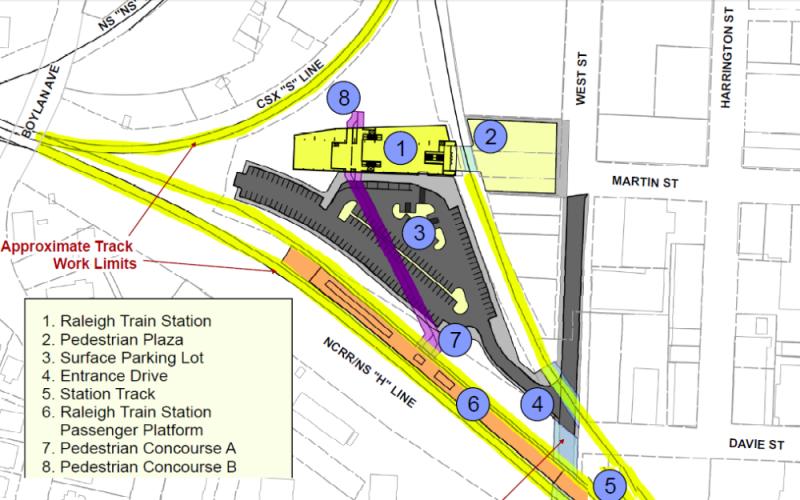 And now here is the original floor plan for the interior.

Here you can see the breakdown between the gathering space, shown in blue, the retail space, orange, and the office space, brown.

Last night, we had this new plan on the table. 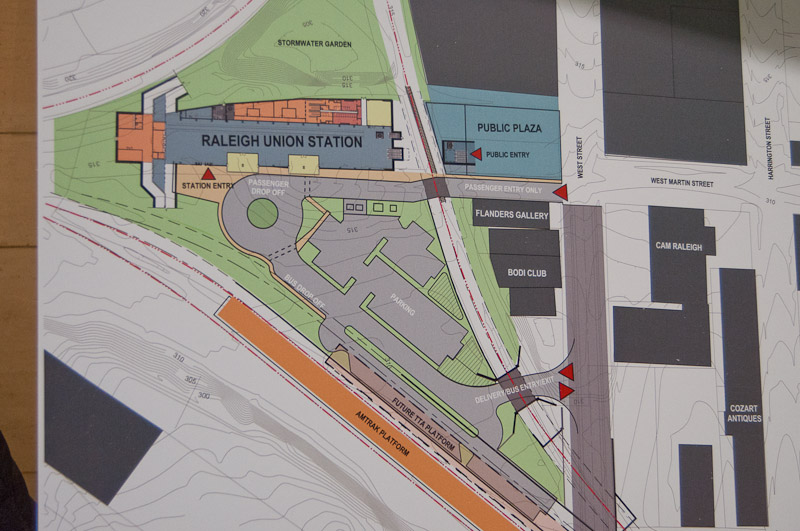 The same blue area in the image above shows an elongated gathering space that goes from the front to almost the back of the building. This comes from a different layout of the offices and incorporating some of the upper floors of the northern part of the building. The larger gathering space, suggested to be lit up with lots of natural light, is a great idea and I hope the planners can deliver it.

The parking lot has been rethought with a second entrance to West Street and a traffic circle in front to keep vehicles moving and avoiding conflict with parking. This is definitely a step in the right direction as car/bus traffic flow is being thought of in a smarter way.

I’m hoping the entrance in the front, with a pedestrian plaza, will really get some extra attention. As soon as travelers arrive at Union Station, they will be stepping into downtown and the plaza needs to make a statement. I’m hoping visitors will stop for a quick second and feel like taking a photo of themselves.

Great stuff so far. Expect more details during the next presentation.