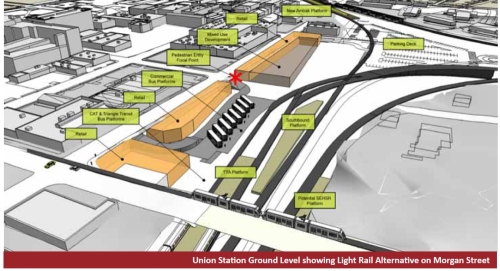 Last week, the city released a draft report about the multi-modal transit center planned for the intersecting tracks west of downtown known as the Boylan Wye. Giving a nod to what once was Raleigh’s Union Station on Dawson Street, the multi-modal transit center will eventually become the new Raleigh Union Station. If you want to dive right into the report yourself, jump over to the city’s website and download the pdf.

I combed through the 109 page document to look for some good information as to what we might expect over the next decade or so as transit services start traveling through the Boylan wye. I’d like to just remind readers that the city’s document and this information I pulled from it below are not final and still under review, intense review.

For a formal presentation and an opportunity to get questions answered, there’s this information from the city’s website

A public open house will be held on May 12 to present the report findings and answer questions. The Raleigh Urban Design Center (133 Fayetteville Street) will host two opportunities to attend:

After the open house, a 30 day comment period will be provided followed by the preparation of a final report. Comments must be submitted to Martin Stankus by June 11, 2010.

If you work downtown, make sure to get your questions answered during your lunch break. If not, I’ll see you in the afternoon. Let’s get to the details.

The report describes the Wye as the most complicated section of rail crossings and junctions in the state. Current users of the Boylan Wye are CSX and Norfolk Southern carrying freight and Amtrak with passengers. The location was picked because of future transit services planning to come rolling through starting within the next decade or two. Studies for Triangle Transit regional and commuter rail, and Southeast High Speed Rail are currently underway and all will most likely run routes through the Wye with a downtown station right at this point. In response to these studies, Triangle Transit now owns some land in the Wye as well as the two warehouse buildings between the tracks and West Street; one between Morgan and Hargett and the other between Hargett and Martin Streets. This is the focal point of study for anything related to the future Union Station.

Planners for Union Station have been taking notes about the larger, successful train stations around the country and applying them to their vision for the Raleigh Union Station. Penn Station in New York (hopefully the old one, not the current one) and Union Station in Washington, DC are mentioned because of their large welcoming lobbies and grand architectural features. A quote from the report:

“Important guiding elements of the facility design include creating a landmark architectural statement with a dominant vista down Hargett Street visually linking the center to the heart of downtown Raleigh.”

With the previously mentioned transit services coming in the future, the recommended station size is about 45,000 square feet. Parking needs will also need to be addressed and a 1000 space deck is currently being explored for the center of the Wye.

Trains are not the only modes of travel going in and out of Union Station. Greyhound and Triangle Transit buses and downtown circulators will also be thrown into the equation. There is also a heavy focus on creating good connectivity to downtown and the surrounding districts, those being the Warehouse District and Glenwood South, with wide, attractive sidewalks. From the report:

There is also a suggestion for accommodating cyclists, from as little as bicycle racks to as much as a full bike storage and repair shop with showers, similar to the shop outside DC’s Union Station.

We probably won’t get that much news coverage until real details start to come out about this piece. The report suggests that the city currently explore ways of funding the facility. Pretty vague right off the bat but the best suggestion given was to explore if any of the 1/2 cent sales tax for transit, if eventually passed, can be used for building Union Station.

Projected total costs as of today range from $151 to $212 million. The current plan to divide the tab is for an 80% federal, 10% state, and 10% city split. This means, assuming these projections are accurate that Raleigh would pay between $15 and $21 million. There are lots of factors that could affect these numbers so they are sure to fluctuate over the next decade.

Construction and What to do next

The report suggests a phased approach to improving the area and building the station. First off, it is recommended to get the environmental and engineering stamp of approval, referred to as phase 0. I thought this suggestion was interesting:

If this team is created, we would have dedicated city employees living and breathing Union Station and taking it through each of the phases.

The next phase involves attacking a current need in our Amtrak services. They would be relocated with more parking available and a larger platform. Amtrak has grown out of its building on Cabarrus Street. This could not come any sooner, especially with more frequent service coming this summer and in the coming years.

Greyhound is part of phase two and will be relocated to the area next. There are a few proposals to incorporate them into one of the warehouse buildings for easy transfer from one mode of travel to another.

The last phase, phase three, includes building out Union Station. There are lots of factors to take in here, especially since it has not been designed yet. Many of those design decisions will be based on the other rail transit methods as they come to design completion. One of the major obstacles mentioned was whether Triangle Transit’s regional rail would be Light Rail or DMU trains. The trains would run on the tracks but it’s possible that the light rail could run on the street and approach Union Station on Morgan Street. All scenarios seem to be considered and as the years go on, more details will be set.

The Raleigh Union Station is being described as a “gateway to the south” as visitors from up north travel to or through Raleigh.

There is a great picture of Raleigh’s Union Station in 1940 on page 23.

It is recommended to consider the possibility of connecting West street to South Saunders Street. They would be connected by going under the tracks and joining Cabarrus Street

Right now, it is suggested that Hargett Street be closed to vehicle traffic and Union Station be built on or around it. Pedestrian access will still be there but it looks like the easy solution here is to cut car access on Hargett. 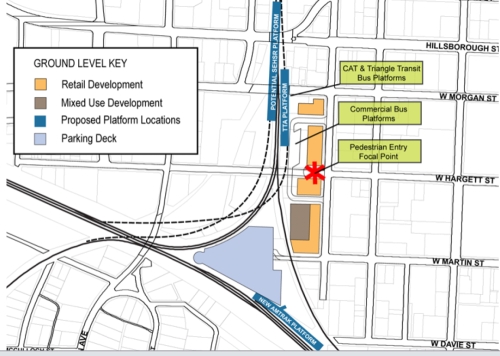