As most of you know, the blog has been down for a few weeks as I was out of the country in Australia. The trip was all vacation but it was hard to turn off the thinking cap when we stumbled across something cool in the urban areas of the country. Every now and then, I thought about how things I saw over there could work in Raleigh.

We did see the wildlife and The Outback of the country during our time but the cities are what I want to mention here in this post. By no means am I saying that Australian cities are the shining example to copy. I admire some of the city aspects that have led to an urban environment that I think most readers want for downtown Raleigh.

Everyone agrees that Raleigh is growing and we will continue to grow for the near future. So what kind of city do we want to become?

There were a few aspects of these Australian cities, all larger than what Raleigh is now, that we could grow into but the planning for it has to start now. Urban parks, pedestrian amenities and historic preservation are just a few examples of things that had to start somewhere and over time, they have really elevated these cities in terms of livability and overall ‘interestingness’.

Here are a few points that I feel Raleigh needs to plan or do today in order to help foster urban growth in the future.

Protect Open Spaces
While visiting the city of Perth, I was very impressed with Kings Park. This 1,003 acre park sits on a hill overlooking the Swan River and is a short walk from the city’s core business district. (CBD) The park has been open since 1895 and today two-thirds of it are natural and untouched. Outdoor events take place at the botanic gardens and citizens of Perth just enjoy the open space. The big sell is the amazing view of the Perth skyline and the Swan River right from the park. 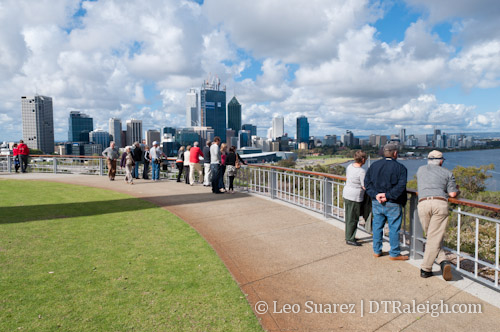 I immediately thought about Raleigh’s Dorothea Dix campus and the Dix 306 effort to make it a park. Kings Park was planned to stay undeveloped over 100 years ago and over time, the park is a jewel for the city. Raleigh should follow this same path.

After taking a look at some maps, Perth’s Kings Park is pretty much the same distance to its CBD as the Dix campus is to Raleigh’s CBD. What a huge opportunity for the city and downtown will benefit immensely. We should preserve all 306 acres of the land, no less. I look at the current city council for getting this done. If you support this effort, please make more noise for it.

A City For People
From my point of view, I felt like the cities were built like the ones here in the states. Downtowns, or city centers as they are more commonly referred to, is where the density starts. The center is surrounded by urban neighborhoods and as you continue out the suburbs fill in. The difference, however, is how the cities are well connected with trains, long distance bicycle lanes and other transit for people to get around with. It’s just woven into the culture there.

Raleigh is taking steps towards updating it’s transit but there are smaller steps that can be done to show that the pedestrian is the most important life form in our urban areas. Sidewalks that are wide, maintained, and on both sides of the street are important. The comprehensive plan and the Unified Development Ordinance are helping push wider sidewalks and bicycle amenities into downtown so we may be at the beginning of this change.

Australian cities also use lots of awnings on buildings, similar to the one over the entrance of the Sir Walter Apartments building, providing shelter against the rain. I’m sure the appearance would really irk some people but they are very functional and kept the sidewalks crawling with people even in the rain. And it’s not a new concept for Raleigh at all. Take a look at some historic photos and you’ll see downtown with lots of them hovering over the sidewalks. 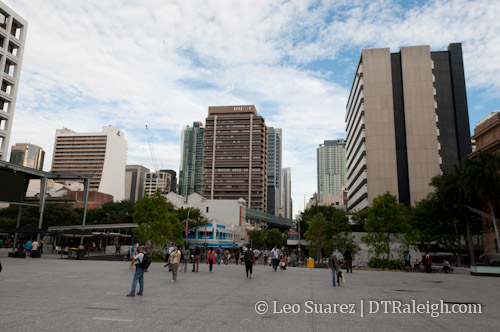 In some areas of the cities, crosswalk signs operate slightly different. As a pedestrian, when crossing a one-way street, the walk signal would turn from ‘Do not Walk’ to ‘Walk’ about three seconds before the car traffic light turns green. This helped put pedestrians out in the street so cars are made aware of them. I feel something like this could be done on the busy streets of McDowell and Dawson.

An example would be with a car waiting to turn right onto McDowell Street with a pedestrian waiting to cross at the corner which is to the car’s right. Currently, the traffic and pedestrian light turn green at the same time and anxious drivers sometimes cut off the ‘slow’ moving pedestrian. This leads to close encounters with an exchange of short words and a finger. (I’ve seen it and have done it) But if the pedestrian signal turned ‘green’ three seconds before the traffic light, then the waiting pedestrian would probably be in the middle of the intersection when the car wants to turn. This makes the pedestrian more visible and there’s less of a wait for the car, while the light is green.

Come to think of it, Wilmington and Hargett Street need this as buses taking right turns onto Wilmington Street are not too considerate in some cases to pedestrians crossing in front of them. It sounds like a small change but I feel those tiny details make a difference for the sidewalk experience.

Protect History
This is a tough one. Where can we draw the line on historic preservation? What should be saved and what can we live without? The way I see it, Raleigh’s historic building stock is pretty low so only saving buildings on the scale of Briggs Hardware is too weak in my opinion.

Renovation and re-use should be encouraged and it’s happening today in some areas but not on a large enough scale. As our historic buildings are torn down, including the ones with no architectural contribution, structural reminders of Raleigh’s past are now only kept in photos and memories. More people should realize that we live in an age where things are built with the bottom line being the most important element during construction. This leads to generic and uninteresting structures that are going to look the same from city to city. If all the historic buildings are gone, what differentiates Raleigh than any other city that has torn down it’s past? I think this needs to be worked on in the near future as shorter buildings in downtown and the warehouse district may come down in name of progress.

An extreme example of historic preservation in Australia I want to share was the way the city of Melbourne held onto a lead pipe and shot factory, the fifty meter tower of it being the tallest structure in the city for a few decades. Actually, you may not call this historic preservation but I’ll let you decide.

The Melbourne Central train station was built under the shot factory with a five story mall with movie theater above ground. The shot tower still sits in the central indoor plaza of the mall with a tall glass cone encasing the plaza and the tower as well. The tower now has a small museum and was renovated as store space for the mall. 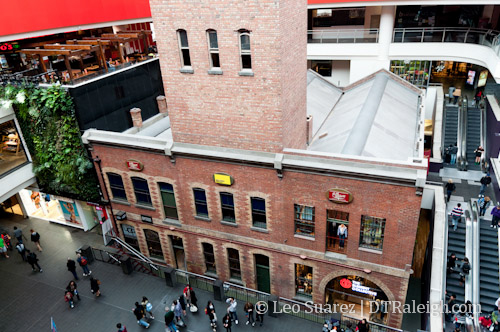 Don’t Be Scared of Giants
As a followup to the protect history section, I think that we shouldn’t feel scared to build tall next to a short building. Maybe I’m in the minority here but as a pedestrian I see nothing wrong with a three story historic building up against a skyscraper. From afar, sure it may look a little strange but walking around Lang Park in Sydney, there were quite a few examples of old shorties next to giants. 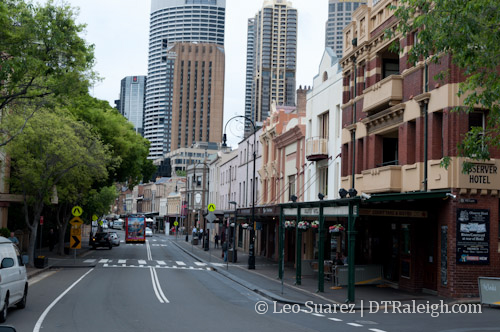 Lang Park is near the area of Sydney called ‘The Rocks’, the site of the original settlement near the water. Since it’s old, almost all of the buildings are two or three stories tall. There is an interesting transition from The Rocks up towards the CBD, where the skyscrapers tower over the history and in some cases are right up against them. It’s tough to describe without seeing it but it really wasn’t a big deal. Trees, which are awesome anyway, helped block out the skyscraper in some cases from a sidewalk point of view and it didn’t matter. If you explore the area on Google, you can see what I mean.

Think about this the next time you walk down the sidewalk in downtown Raleigh. How many floors are you really paying attention to right next to you?

Public Art Aplenty
This one should be easy for Raleigh. Public art seemed to be everywhere and with great open spaces and pedestrian plazas, the art was the final touch to making the experience more enjoyable. First Friday, Sparkcon, and Artsplosure are just some of the few arts events that take place in downtown that push the arts. But they are still events that end and come back later. More public art installations around downtown will let people know that this is an interesting area to be. 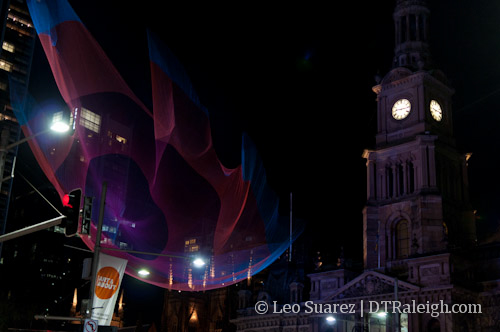 As with any trip, the new experiences just flood me with new ideas. The other cities that are doing some of the things we talk about and plan are now doing it successfully. With more people moving here, downtown Raleigh must accommodate the growth along with the rest of the city. There’s no standing still I feel. We just need to walk the walk and get to that next step or else Raleigh will fall into the category of generic city, USA.