Suds and Speculation posts are ideas I come up with, usually while drinking and socializing with friends or people I meet. The posts also use real data leading to some idea, or dream, that we can speculate on for downtown Raleigh. 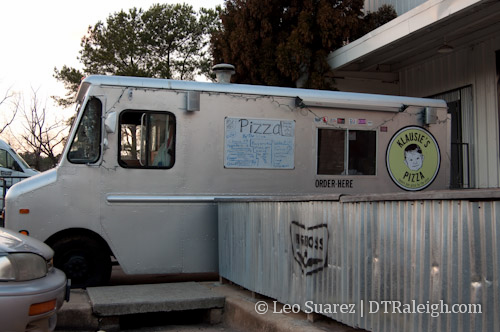 Quiet for now, but not gone yet, this food truck debate is a new puzzle for the city to figure out. For those needing to catch up, this article at the Raleigh Public Record is required reading.

I lean toward siding with the food trucks in this debate but want to see a smart plan come from the city to regulate this new industry. I strongly disagree that brick and mortar restaurants need to be protected by the city, an argument that restaurant owners make quite often. Mike Stenke, referenced in the article, makes a point about only competing with fast food chains and not the larger restaurants. It’s still a tough situation to figure out.

Why Food Trucks Do Not Compete With B&M Restaurants

To me, the main difference between the restaurants in the downtown buildings and the delicious food trucks is the experience you get from going to them. They differ completely and maybe at first you will be intrigued to get a burger or some Korean tacos from a truck but after a few tries, the curiosity is over and it’s the experience you seek.

This completely to-go experience, or maybe ‘service,’ is what the food trucks are bringing. Plus, who’s stopping a restaurant from having to-go orders and still beating them out with hours, weather, and space while you wait?

The argument that food trucks compete with fast food restaurants makes more sense when you think of it this way. Both have low prices. Both offer little or no atmosphere. Weather, well, you got me there but you can call in your order at a food truck. Does McDonald’s do that?

Why Food Trucks Should Be Allowed In Downtown

Someone, somewhere, said that competition is a good thing. To raise the bar on food in downtown Raleigh, competition between businesses should be fierce and feisty. Established restaurants will gain their following and always be in business but newcomers need to prove they are worth something by bringing something exciting to the table. Allowing the food trucks into downtown just keeps stirring the pot and making things hotter. (and that’s a good thing)

Restaurants close all the time and owners claiming that the city needs to protect them from the food trucks are just plain wrong. Let’s flip the perspective. If these businesses were protected by the city, are they going to guarantee jobs and tax revenue for X amount of years in return? No. If the business isn’t doing well, it’ll shut down, even with the city’s “protection.” This is a bad deal, and that is not how things work around here.

I feel it’s in the interest of boosters to get food trucks to serve the downtown sidewalks. Food trucks will be an added amenity that we don’t have right now, expanding our variety of offerings. It may not sound like much but if successful, downtown Raleigh will now serve another market and be at the, somewhat, beginning of an emerging new industry.

Variety keeps you competitive. And you never know. Some of these guys in the trucks might open restaurants near their customers one day….in downtown Raleigh!

Why Food Trucks Should Not Be Allowed

But with the Pros comes the Cons and I have a couple points I’d like to make against having food trucks in downtown.

There is a certain feeling, call it experience, with being downtown. I’m talking about the outdoor urban experiences: walking down the sidewalks, drinking outside, people watching, things like that. In a worst case scenario, if food trucks were allowed to set up next to any curb, my hesitation to support them in downtown comes from a fear of ruining that experience.

With hundreds of people walking along the sidewalks, sometimes thousands during busy weekend events, it is in the owner’s interest to move where the people are. Who would stop a food truck from parking in a “good spot” early to rake in business from the nightlife or event crowds that will come a few hours later?

So, in this worst case scenario, food trucks sitting in parallel parking spots hurt the downtown experience. They take away parking, lowering turnover. The large trucks cramp the limited space we already have. Some have generators to power the kitchen – you think that will be pleasant to stand or sit near?

So I feel regulation is needed because if successful, who’s to say the food trucks won’t act predatory and just follow the crowds around like spam to an inbox?

Figuring out how to make this work will not be easy and I’d be interested to hear some good ideas.

A quick way to implement something could be to allow owners of surface parking lots a permit to allow a food truck to set up on their lot. This doesn’t disrupt the parallel parking spots in downtown and places the trucks on property managed by a private owner.

Another solution I’m sort of wrestling with in my head is an idea to implement ‘Flex’ parking spaces in certain curbside spots around downtown. Just like the truck delivery spaces work today, these spaces could be for deliveries and for food trucks to set up. Likely spots would be around Nash and Moore Square, the state government complex, and the museums.

I support these food truck businesses in downtown Raleigh and want to see it happen in a smart way that regulates this industry just as fairly as everyone else and also encourages it to grow.