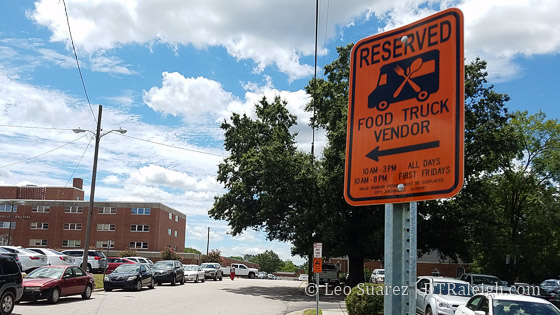 This week, a six-month pilot program starts for having food trucks in and around downtown Raleigh. This means that the trucks can operate outside of just events. There are four areas for the trucks to set up at including:

The hours for the trucks to be here are between 10am and 3pm. On First Fridays, they are allowed out there until 8pm.

The food truck debate really does put our public spaces, more specifically the public on-street parking spaces, into view. Parking, and the threat of reducing it, gets emotions running. In my opinion, these designated food truck areas provide a greater public good then a few more parking spaces. They support a diverse of uses, especially a use that provides to pedestrians in an urban area rather than vehicles in an urban area.

Skepticism over food trucks isn’t new in Raleigh. The City of Raleigh Museum has a good blog post about the debate over ice cream trucks in Raleigh during the 1960s.

Are food trucks really an issue or is Raleigh just being Raleigh?

Hopefully, the pilot program goes off well and more food truck areas can be added to the list.