The demolition at Seaboard Station continues. The site with the former Sunflower’s Cafe is no more. Mixed-use buildings with a possible hotel, apartments and ground-floor retail are in the plans for the future.

The area looks huge after the removal of all the buildings and surface parking. It really shows you how much more you can do when you remove all the land dedicated to parking cars.

We’re tracking this development in-depth over on the Community starting with some great aerial photos.

Fencing has popped up around some portions of Seaboard Station. A demolition company has put up it’s sign around block B. I take it to mean that the central building, shown above, is about to be demolished.

Block B plans for a residential building over retail, described in more detail in this August 2020 post. Block A also has fencing around it as well. Residential is still a hot commodity in Raleigh so leading with this development over the hotel portion makes sense for this year if that’s what we’ll see take place.

During the Aug 20 meeting of the Raleigh Appearance Commission, a request for an alternate design came up for what’s being called Block B of Seaboard Station. The six-story building planned for this site is a mixed-use building with residences over retail. Above is a concept rendering

A bit unique to the building, and very welcome in my opinion, is that the plans show parking being underground. You don’t see too much of that with the development of the last few decades as a plethora of new buildings have been built over a parking deck or have the deck wrapped in the interior.

The site of Block B at Seaboard Station would loosely be over the current tennis courts along Halifax Street between Seaboard Avenue and Franklin Street.

It doesn’t look like the building would go all the way to Abe Alley so perhaps the remainder of that block is still being worked on.

The plans show about 180 units and all four sides of the building have an active use for either retail or residential. There’s just one parking entrance along Halifax.

Those are some of the high-level takeaways about this project from this request. If you’re curious about the request itself, the summary says:

The building meets the build-to requirement for much of the site but is missing build-to requirements along Halifax Street. A major Duke Energy 115kV transmission line and easement extends through the property along the entire Halifax Street frontage. Buildings and other permanent, above ground structures are not allowed within Duke Energy’s transmission line easements.

The latest submitted plans (SR-034-19) for new development at Seaboard Station have been submitted. The plans are for a new 7-story building at the northwest corner of Peace and Halifax. Currently here is the building with the Sunflower’s cafe and other surface parking.

The new building would be 7-stories and include parking with some spaces partially underground. It’s interesting to see the development proposing 236 parking spaces rather than the required 171. However, with 96 apartments and 150 hotel rooms, that may leave plenty for residents, overnight visitors and daytime, nighttime restaurant-goers.

The plans don’t list any retail or restaurant space other than the hotel bar and kitchen. The ground-floor spaces may be used for parking instead.

Cline Design, architects behind Peace and The Link, are working on the design for the new building.

Finally, the northern side of the block has a very generous sidewalk and converts the striped “turn in” parking to off-street, urban style spaces. The northern side may be the “front-facing” side as it supports the Seaboard Station area. The site plans suggests some public art here as well.

The plans are currently under review by the city so no real timeline is out there yet. When news hit about developing these sites, there was mention of sooner rather than later so hopefully, we’ll see things move soon on what is currently an under-used portion along Peace Street.

In December 2018, it was announced that a developer had been selected to buy parts of Seaboard Station from the owner, William Peace University. Plans for new development are underway including apartments, hotel space, and more retail.

PN Hoffman, the developer of premier urban communities across the Washington Metropolitan Area including the $2.5 billion Washington, DC, waterfront neighborhood The Wharf, along with William Peace University and TradeMark Properties today announced PN Hoffman’s purchase of Seaboard Station in the north end of downtown Raleigh. The expansive $250 million  will be built in three phases and consist of approximately 800,000 square feet of mixed-use space at full build-out.

With this news, Seaboard Station has the potential to really break out from just a destination but into a district with its own personality. I thought this would be a good time to walk around and grab some photos of the area.

If you are not familiar, Seaboard Station consists of a hodge-podge of brick buildings from the 1950s and 1960s with Peace Street acting the main “frontage” of the area. In addition to the former railroad station that now houses Logan‘s, a long-running garden shop, the businesses here Seaboard Station and are marketed as a destination.

With the buildings built slowly over time, it’s doubtful that a master plan for the area ever existed so we have a frankenstein-esque retail area that represents the car-centric era that it was built. With a stagnating downtown in the 60s, you can see that no real urban feel exists in Seaboard Station with the development at that time.

Bolstered by downtown’s growth and of new residents in recent history, Seaboard Station has had a big increase in new tenants. Renovations have brought existing spaces to market but no new space has been built.

The one-story buildings dominate the landscape here with streets that are awkward to navigate and parking plentiful. There’s no real public space and even gravel parking lots sit empty giving the area a dull, uninteresting feel at t.

It’s best to just drive in, get what you want and leave.

The potential here though is that all this space can be used for wide sidewalks and plazas. Building upward is almost mandatory.

Indeed, the new owners have announced that the first phase of the development will include a hotel. Hotel visitors will want to be able to walk to places so anything nearby within Seaboard Station would be highly considered.

In the future, as Peace Street gets its road diet and Smokey Hollow continues to extend Glenwood South closer to Seaboard Station, Peace Street might become a destination street linking both areas together.

We’re following Seaboard Station in-depth over on the Community so come join the conversation.

Readers of the blog should not be surprised that there is a lot of momentum coming soon to Peace Street. The Smoky Hollow project near Peace and West, Devereux Meadow park, the new Capital Boulevard bridge, and new developments in Seaboard Station, including a Harris Teeter, are all going to dramatically change the look of Peace Street.

I went out there to take photos and I’m putting some lengthier stuff together, which I hope to finish soon.

Speaking of the bridge over Peace, put August 18 on your calendar as a public meeting about the Capital Boulevard bridge replacement project is planned.

Save the date! A public meeting is scheduled for Aug. 18 to discuss the Capital Blvd. project and traffic impacts. Details to be announced. 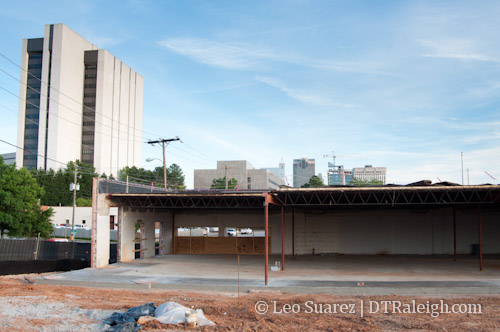 Warehouses in Seaboard Station under heavy renovation along Seaboard Avenue on June 16, 2012. 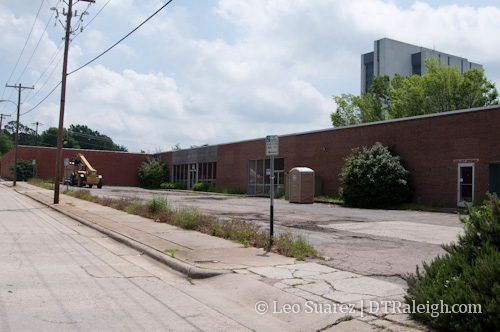 What was once planned to be a condo building here at 111 Seaboard Avenue in the Seaboard Station area, will now be renovated for shops. This one-story building will be converted sometime this year, according to David Bracken at the N&O.

What would you like to see in the new spaces?

And can we make it easier to cross Peace Street at Vaughn Street?