I had the pleasure of meeting up with Steve Rehnborg over at the Raleigh Night Market recently and he showed me his first wave of products that his company, Civic Flags, is offering. This includes a City of Raleigh flag!

Partially inspired by this 2012 blog post about the flag, Civic Flags fills in a gap in our city: you can’t easily order a flag for your own enjoyment!

I’ve got my flag so wanted to inform readers of the new site. Jump on over and see what they got. You can also follow them on Instagram to keep up with them. 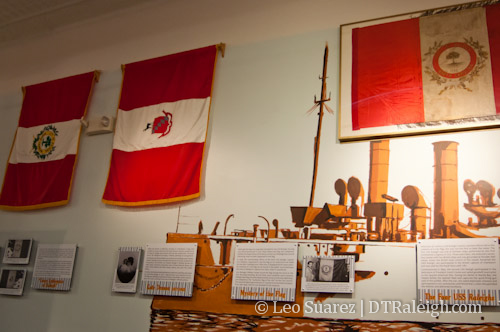 About a week ago, Josh Shaffer at the N&O wrote a piece about what could be the new icon for Raleigh. He suggests that the now open Nature Research Center‘s 70-foot globe needs consideration for that title. The bronze acorn and the shimmer wall were other landmarks mentioned but I’m going to throw the City of Raleigh flag into the mix. Yes, Raleigh has a flag and in case you haven’t seen it this post will take care of that. The flag should always be considered one of our core symbols and I don’t think we give it enough love.

In other cities, the flag is a sense of pride. Chicago and Washington DC have great flags and if you’re lucky, you may find citizens with tattoos of it. (anyone in Raleigh can claim having this?)

In 2004, the North American Vexillological Association did a survey against 150 US city flags. Respondents answered on a 0 to 10 scale on what they thought were a well designed flags. We ranked 56 on that list, highest North Carolina city by the way, so flag design may not be a huge feather in our cap.

Still, I want to ask this question; Why are there so few Raleigh flags around town?

The Raleigh flag design is over 100 years old but has an interesting history that may explain it’s rather nonexistent role in our city.

The City of Raleigh flag has a nice, mysterious story to it as its original purpose was not made for the city at all. The most influential event on this would be during the Battle of Manila Bay on May 1, 1898 as part of the Spanish-American War.

The USS Raleigh (second US ship named after the city at the time) played a key role in the fighting in the Philippines and back at home, the local newspapers kept Raleighites enthralled with stories of victory at Manila Bay. Thomas R. Jernigan, a former Raleigh resident who was representing the United States in China at the time wrote home saying:

tell Mayor [William M.] Russ she was in the thickest of the fight and came out in excellent shape. The Raleigh is a splendid vessel, and may be counted on to do her share of the fighting in this war.”

The cruiser would stay in Asia for a bit longer returning back to the United States with a stop in New York in April of 1899. The city sent representatives there for the national welcoming reception for the ship.

At the same time that month, the Raleigh Board of Aldermen (what is now a version of our current city council) decided to give a city flag as a gift to the cruiser. A flag had not existed at the time and so began the process in creating one. A special committee was formed for this specific purpose.

First, color was needed. The colors of red and yellow were adopted for the city’s centennial (1892) however for the flag, these two colors were seen as “too Spanish” and not used. Sir Walter Raleigh’s colors of red and white were chosen instead and described as “the colors emblematic of Raleigh.”

The Board of Aldermen then contracted Miss Kate Denson to design the flag for a fee of $50. Her flag consisted of three colored, vertical stripes (red, white, red) with unique designs on each side. On one side, the flag contained a figure of an oak tree inside a gold circle with the words “City of Raleigh, North Carolina, 1792” all surrounded by a wreath of oak leaves and acorns. The other side contains the Sir Walter Raleigh coat of arms with the words, “Presented to the U.S. Cruiser Raleigh, the ‘First and Last at Manila.'”

While Miss Denson was contracted in April 1899, other events with the ship were ongoing.

News that the ship would next make a stop in Wilmington, North Carolina quickly spread and Raleigh made big plans for a welcome party in the port city. In addition, there was news that the ship’s officers and crew were going to present “a gun captured at Manila” as a gift to the city. The “Nordenfeldt 3-pounder” was given to the city on May 5, 1899 and then again the day after at a more formal ceremony.

Miss Denson’s flag was not ready in time and Attorney R. N. Simms, spokesman for the city, made an announcement at the ceremony that “a handsome flag of the new city colors” would be later delivered.

It’s not proven whether the flag ever made it to the ship because the USS Raleigh was decommissioned in June and Miss Denson would complete the flag in October. That month, the 43″ x 69″ flag with gilded fringes all around flew at the North Carolina State Fair. The flag was officially presented to the Board of Alderman on December 1, 1899. Satisfied with her work, they contracted with her for a second flag for the City of Raleigh. No records exist whether this flag still had the Manila Bay reference like the original did.

Here’s where the mystery starts to settle in.

In 1938, one of these two flags was lent to the next USS Raleigh (third US ship named after Raleigh) in order to be copied. Upon return, then City Clerk J. E. Sawyer noted that it was “now nearly worn out.” This left Raleigh with one remaining flag.

The mystery is now in full effect as no mention or public record of the flag has been found after 1938.

In 1960, the flag resurfaced. William Carper, the City Manager at the time, found one of the flags in a storage area within City Hall. Talks of making the flag official for the city started and during that same year the city council adopted the design as the “authentic flag of the city.”

Restoring the uncovered flag was an eleven year process and it returned to Raleigh in 1980 where it was on display at City Hall.

Back to the present

Today, the flag found in 1960 is still on display at the city museum with a recently updated exhibit. Along with much more information than provided here, the exhibit has a nice artist rendering of the second USS Raleigh.

So how does one get a copy of our city flag? 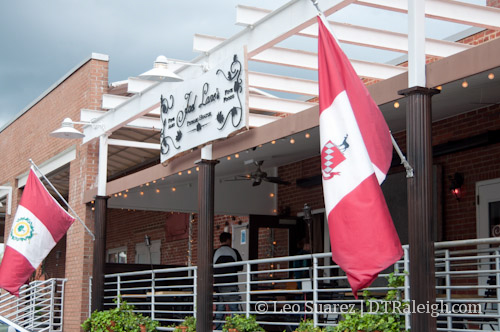 City of Raleigh flags outside of Joel Lane’s Public House

My research has fallen rather flat as the flag is a custom design and is pretty costly for someone to get through a flag shop. Where’s the local vexillographer at anyway?

The city does have a stash of custom made flags for sale in case someone is interested. For $98, you can get a 4′ x 6′ flag to show your pride. Talk to Barbara at the city Public Affairs office (919-996-3001) to make arrangements.

Who will be the first to step up and make the Raleigh flag available for the masses? If anyone is interested in city branding, this could be a topic to expand on.