About a month ago I decided to make this legendary Raleigh drink, Cherry Bounce, and this weekend was the official tasting at a party I organized. The words Cherry Bounce pop up here and there around Raleigh but the actual drink, rumored to have played a role in the choosing of the North Carolina capital’s location, is not served anywhere to my knowledge. Yes, Deep South can make it for you on the spot but this is a drink that needs to be made before hand so I don’t count it.

I’ll be honest, I did little research on the recipe but discovered the following and just went with it:

The cherries and sugar are easy but the whiskey is wide open. Since there are many types of whiskey out there, I made three different batches of CB for the tasting party. I asked a bartender friend for some help here and needed three different types to use. Jameson, Crown Royal, and Jim Beam were the final candidates. I had to use frozen cherries since fresh ones are not available right now and I went with brown sugar to close things out.

Making the CB was pretty easy. All three pieces were thrown together, stirred, and kept in separate pitchers for serving later. I did add a little water to the sugar beforehand so that it was more of a paste rather then pure sand.

After five or six weeks of sitting in my kitchen, the CB was ready to be strained. I used a huge cheese cloth and poured the entire pitcher inside a bowl wrapped with the cloth. Most of the drink comes out easily but you can get a few more ounces if you squeeze the cherries while inside the cloth.

During the party, there were mixed reactions towards the CB. Each batch was served blind and no one knew what whiskey was in each sample. It had also been sitting out for six weeks so the drink was at room temperature; no ice was added. The Crown and Beam batches were the most popular. Whiskey fans leaned more toward Beam while others preferred Crown. These two had pretty opposite tastes while the Jameson batch was more down the middle.

Overall, the drink was good, but not great. Fortunately, I still have some of each batch left. I am going to get more opinions and will tweak the recipe so it tastes really great (hopefully leading to a follow up post to this one).

Unfortunately, I’m lacking pictures during this whole process. It is nothing exciting unless you taste it for yourself. Ask for Cherry Bounce at your favorite bar and let’s get it flowing through downtown. 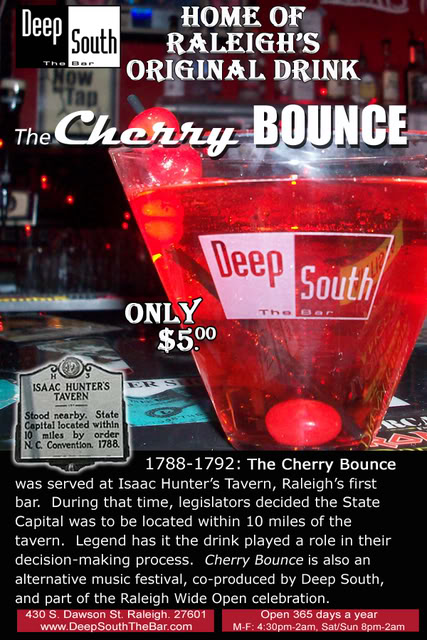