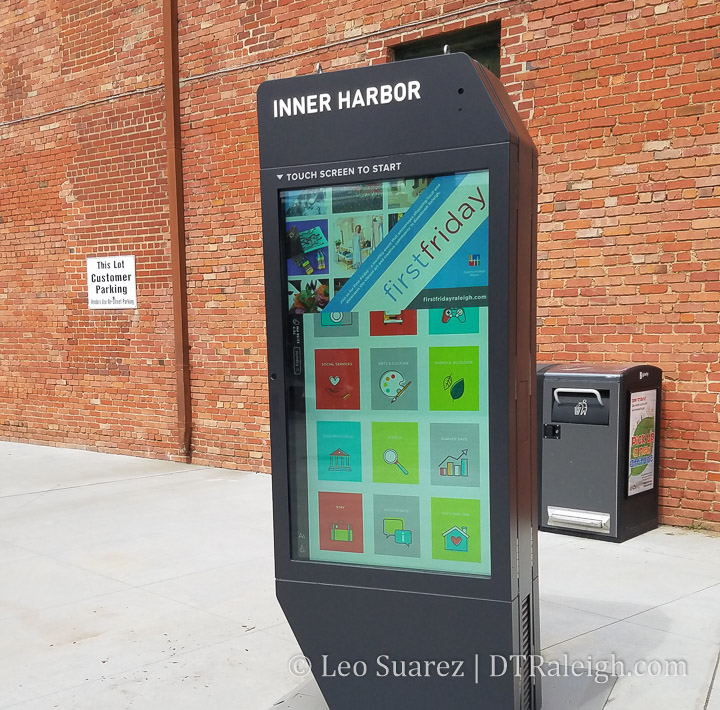 An IKE wayfinding kiosk on display in front of Union Station.

During the October 2, 2018 city council meeting, councilors received an update on the latest downtown wayfinding plan that comes from the Downtown Raleigh Alliance. The presentation given introduces IKE, a free-standing kiosk with a touchscreen, that presents downtown retail, transit, and event info to pedestrians. The company, IKE Smart City, makes revenue off advertising with the DRA getting a cut of that revenue.

In addition to the touchscreen, a built-in camera can be used for selfies, pedestrian counting, and even public safety if the city wanted it too. A lot of features seemed optional, tailoring the IKE experience for each community as Jibran Shermohammed, Director of Development & Corporate Counsel at IKE Smart City, mentions during the presentation. Below is the video of Mr. Shermohammed as well as DRA president Kris Larson at the council meeting followed by the discussion.

The presentation by Mr. Larson and Mr. Shermohammed is near flawless, describing the kiosks and the agreements between IKE Smart City and the DRA. Wayfinding comes back into the picture from our 2015 Downtown Raleigh Plan and the system checks all the boxes in terms of accessibility and equity.

The kiosks are also data gathering points collecting information such as pedestrian counts and usage, all anonymized and available for the city. The kiosks themselves are maintained by IKE Smart City including both the hardware and software. Any damage to the units are taken care of and each kiosk receives regular software updates.

The advertising complies with all City of Raleigh advertising policy so anything you see around town right now, like on the buses, is basically the same as you’ll see on the kiosks.

Finally, all this comes free of charge to the city. The company just needs the blessing of the council to allow them to be installed on public property. The approval to move forward with implementation, as well as a text change to our sign ordinance, was needed to make these kiosks happen.

It seems like all bases were covered here on this project yet councilors had concerns or at least perceived concerns, about the IKEs. From my viewing of the discussion, I picked up unreasonable criticism of the system as well as far-reaching efforts to derail the project.

The Council of No

Masked as defenders of the public right-of-way, a subset of the council, which I like to call “The Council of No”, were pulling extreme edge cases here as reasons to not move forward. Rather than tailor the IKEs to something that satisfies council, some councilors were against the kiosks for reasons with little or no backing at all.

NOTE: Councilors Corey Branch and Dickie Thompson were not present.

Both Councilors Kay Crowder and Stef Mendell were concerned over the brightness of the kiosks. From the meeting discussion, Travis Crane, an Assistant Planning Director, called out the acceptable brightness levels in our city’s signage ordinance. Mr. Shermohammed confirmed that the kiosks were lower, operating similar to how a smartphone dims at night or in dark rooms.

Yet, the councilors were still concerned over brightness. 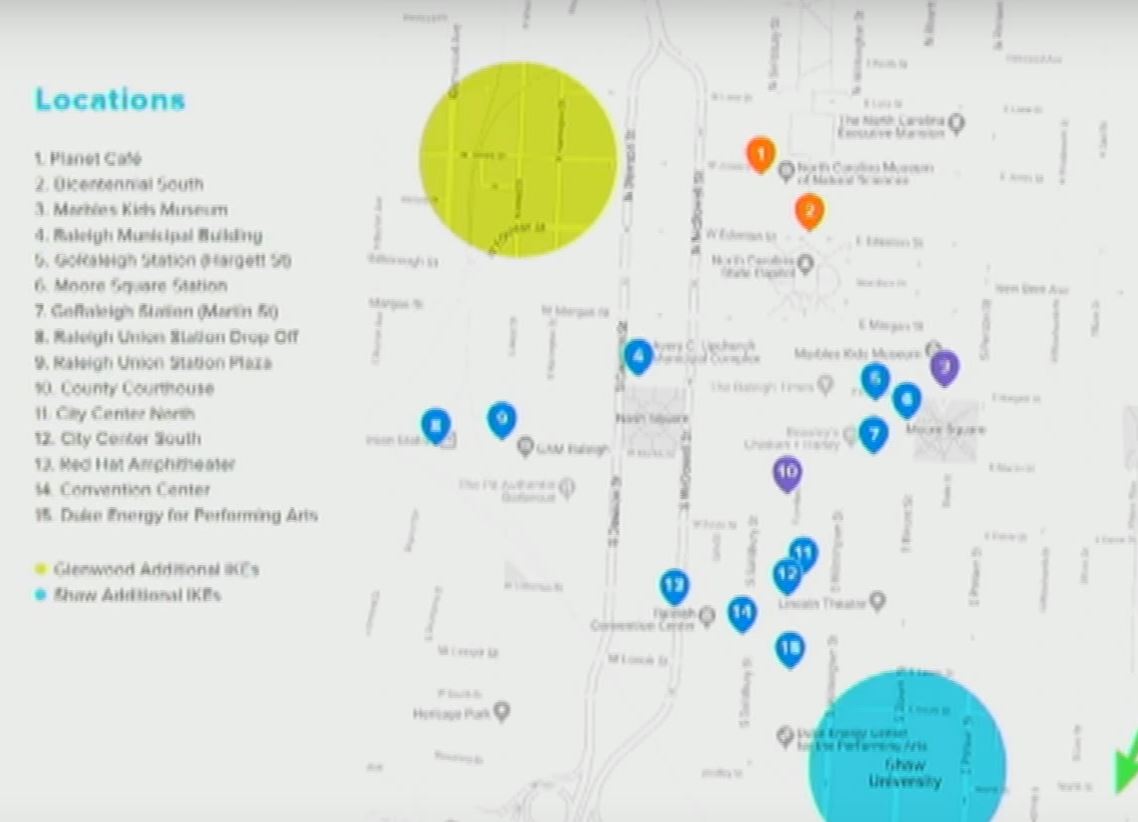 Map of potential locations for the kiosks.

Councilor Russ Stephenson compared the kiosks as “last-century technology” and wanted to see something more mobile, like for a smartphone. While I agree with Councilor Stephenson to a degree, he may be forgetting that we are surrounded by tried and true technology all around us. Why should the city adopt the latest and greatest at a high cost?

Better yet, what disadvantage do we have if the kiosks are deployed in addition to some new mobile tech? To be against the kiosks and pitch something else is a project-killing move from my point-of-view.

Councilor Stephenson’s data privacy concerns are also unfounded. He claims that Raleighites don’t want to be tracked or have data collected about them, even if it’s anonymous. He must not be aware of the dozens of pedestrian, biking, and traffic counters that have been deployed all over the city, collecting the same information that IKE would. This is a feature that could also be turned off if the city wanted it too.

Councilor Stewart, not a member of The Council of No, asked if any other cities are worried about the IKE’s screen brightness and it’s contribution to light pollution. Mr. Shermohammed says that no cities have raised issues with this.

Councilor Cox also tried to derail and discount the work of the DRA by lofting up a suggestion about Bluetooth beacon technology. The tech itself doesn’t matter but, as a city councilor, to have allowed the DRA to go forward with the kiosk project about a year ago and now suggest something completely different isn’t helpful for anyone and is borderline disrespectful.

It was clear to the Council of No that this effort would alter our sign ordinance and possibly allow even more signs that looked like a “bright” IKE kiosk in the future. This is precedent-setting moves and the Council of No always takes the unreasonably fights against projects like this rather than taking a collaborative, compromising approach.

While certainly not the biggest issue downtown Raleigh faces, I take issue with the treatment of this project because there are so many things this helps, so many angles that are covered here and yet we have councilors that can’t move things forward because of perceived negative outcomes and a perceived future that “looks like Las Vegas” as Councilor Crowder states.

It’s either close-minded thinking or some kind of inferiority complex at play here when smart people come forward and pitch new and exciting things to our city. The Council of No has been like this on a variety of topics over the past year and I fear it impacts when really creative efforts want to come forward. (or squashes them early on cause who wants to deal with that, right?)

In the end, the Council of No asked city staff to create a high-level list of what other cities are doing in terms of wayfinding, something the DRA has already done and chosen a solution for. This belittles their work, in my opinion, and am really questioning our councils commitment to downtown Raleigh.

Come chat about council’s support of downtown Raleigh on the Community.